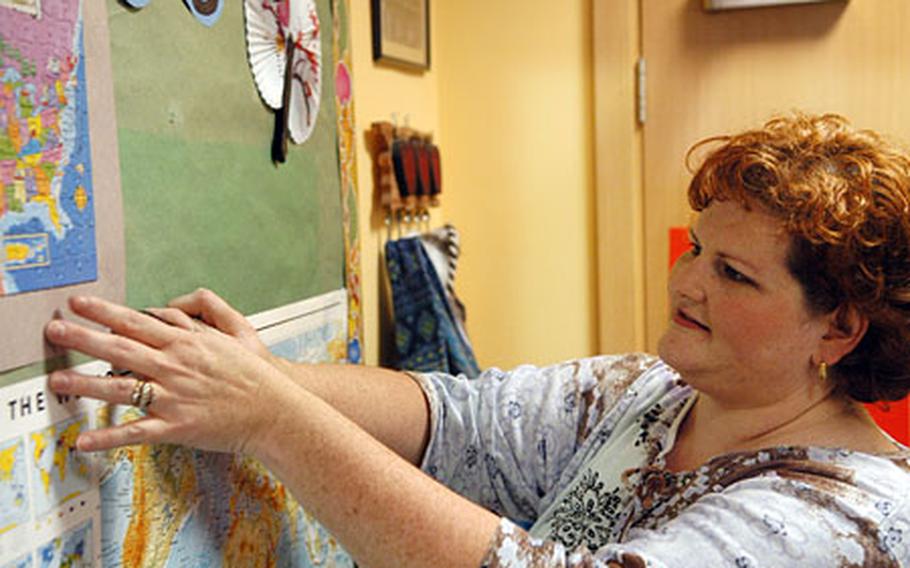 Even though she had about a week until teachers were required to begin preparing, Lisa Ali, a first-grade teacher at Feltwell Elementary, was getting her classroom ready last week. (Geoff Ziezulewicz / S&S)

Although the call for teachers to return to their classrooms hadn&#8217;t sounded yet, Lisa Ali was in her first-grade classroom at Feltwell Elementary School last week, trying to get a leg up on the coming year.

Teachers report for duty this week to prep themselves for the fresh onslaught of children who will be coming through the doors on Aug. 27.

Amid the stillness of Feltwell Elementary&#8217;s halls, Ali said she wanted to get a head start on moving boxes, putting up decorations and seeing to the other assorted minutiae that needed to be put into place.

Sure as the tides or the setting sun, another school year is about to begin for children and parents within the Defense Department schools&#8217; Isles District, which mainly comprises U.K. schools.

While teachers have three official days this week to get set up, Ali said those days often are filled with meetings and other duties that can take away from properly prepping a classroom.

And while the new school year is a certainty, schools here differ in how much things have changed this year.

At Lakenheath Elementary School, Principal Chuck Yahres and his staff are fixated on making sure parents know how to avoid the housing construction in the area and get their children dropped off correctly.

Yahres advised parents to practice the route to the school beforehand, so that there&#8217;s no first-day hassle.

Maps are available in the front office, he said, but the main point is that the &#8220;kiss and drop&#8221; area for those dropping off students is in the rear parking lot, not in front of the building, he said.

At Feltwell Elementary this week, kindergarten teachers are visiting the homes of each of their students, meeting the child and answering questions with the parents, Principal Tom LaRue said. It&#8217;s a program the school does yearly.

Alconbury Middle/High School is absorbing the sixth-grade class from the elementary school this year, and principal Gael Coyle emphasized getting students to class in the first weeks.

Lakenheath High School is seeing an unusual influx of up to 20 new seniors this year, Principal Kent Worford said.

Last year&#8217;s graduating class of about 120 students was the largest in years, he said, and projections put the senior population over that mark in the coming year, he said.

While education is always foremost, the initial weeks of the new school year will largely be about making sure all the parts are moving in the right way, said Eugene Perillo, principal at Croughton Elementary School.