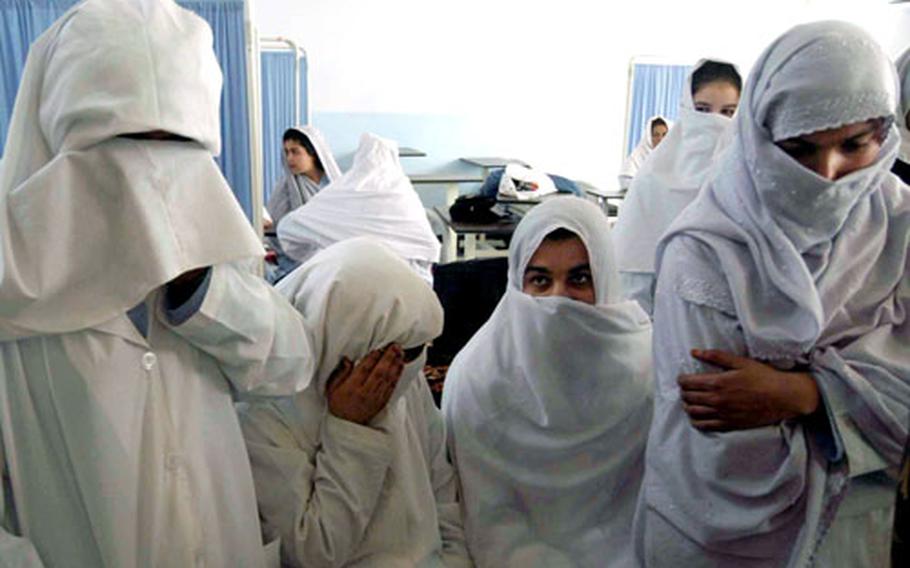 Student nurses at the new Qalat, Afghanistan hospital who trained at the local trade school established by the Qalat Provincial Reconstruction Team. In a very conservative area of Afghanistan, some of the girls are hiding their faces from the visiting coalition officers and cameras. (Michael Abrams / S&S)

Student nurses at the new Qalat, Afghanistan hospital who trained at the local trade school established by the Qalat Provincial Reconstruction Team. In a very conservative area of Afghanistan, some of the girls are hiding their faces from the visiting coalition officers and cameras. (Michael Abrams / S&S) A boy sits at his loom in the rug weaving class at the Qalat, Afghanistan trade school. After passing the class, the students can keep the looms to practice their trade. Currently, most of the rugs made are sold to soldiers stationed in the area. (Michael Abrams / S&S) 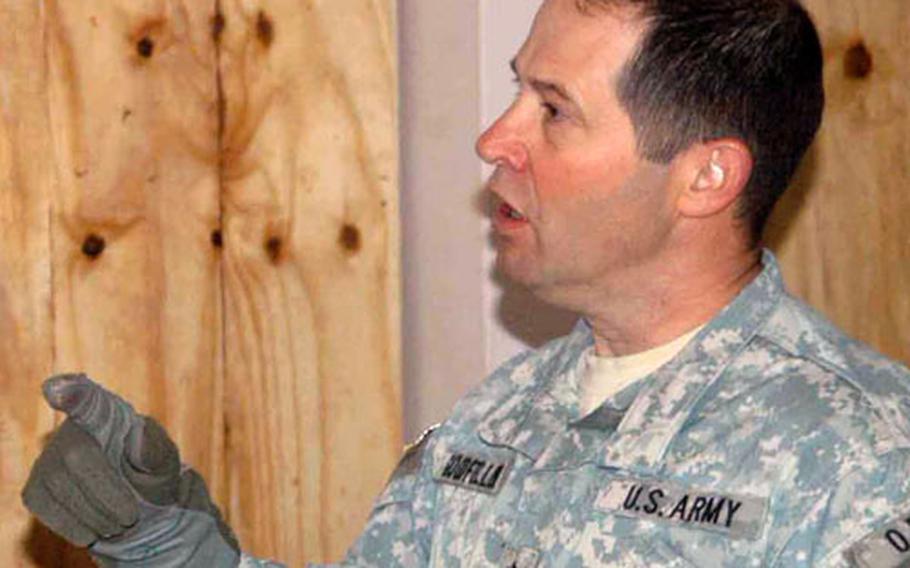 QALAT, Afghanistan &#8212; An array of projects funded by international organizations have helped improve the lives of ordinary Afghan citizens around the country. But one of the intended side benefits of such projects &#8212; giving Afghans jobs &#8212; generally hasn&#8217;t gone over as well.

That&#8217;s mostly because the Afghan work force is largely unskilled, especially outside the major cities.

U.S. Army Lt. Col. Thomas Goodfellow, commander of the Qalat Provincial Reconstruction Team, said it became clear pretty quickly that something was missing when most of the workers came from Pakistan. So the most ambitious project the PRT has funded &#8212; a trade school &#8212; was launched in November and targets the problem.

&#8220;This project was born out of [the idea of] giving the skills to the Afghans,&#8221; Goodfellow said Sunday during a tour of the trade school, much of which is housed on the PRT compound. He said an investment of $198,000 has produced more than 400 graduates with skills they can immediately use in their new professions. Much of the money has gone to purchase tool kits that the graduates take with them.

Instructors for all the classes, except for rug weaving, initially came from the National Guardsmen and Army Reservists assigned to the PRT.

Some of the skills, such as those in the construction trade, are more transferable in the local area than others. Those taking the popular computer classes mostly have to go somewhere such as Kandahar or Kabul to find work.

He said it&#8217;s possible for students to learn more than one skill. But they&#8217;ll probably have to wait a while.

That line can get pretty long. There are only so many classes being taught, and the demand to get in them is high. Local government officials insisted some of their workers get trained (for jobs they were already doing) and instructors also spent time working on specific skills with the Afghan National Army and police.

Another problem was that some Afghan workers bristle at the jobs going to Pakistanis. Last month, amid the furor over caricatures of the Prophet Muhammad appearing in European newspapers, the U.S. military said Afghans seeking jobs rioted outside the Qalat base.

Most of the classes offer basic skills and range from a few weeks to a few months. The eight-week EMT class, for example, includes material taken from the military&#8217;s Combat Lifesaver program and instruction on how to drive and operate in an ambulance.

Goodfellow said the PRT plans to turn over most of the programs to Zabul province&#8217;s Ministry of Education by the end of the year. In the meantime, the trade school has attracted interest from the dozens of other PRTs throughout the country that are run by the U.S. and its NATO allies.