School construction under way at Osan 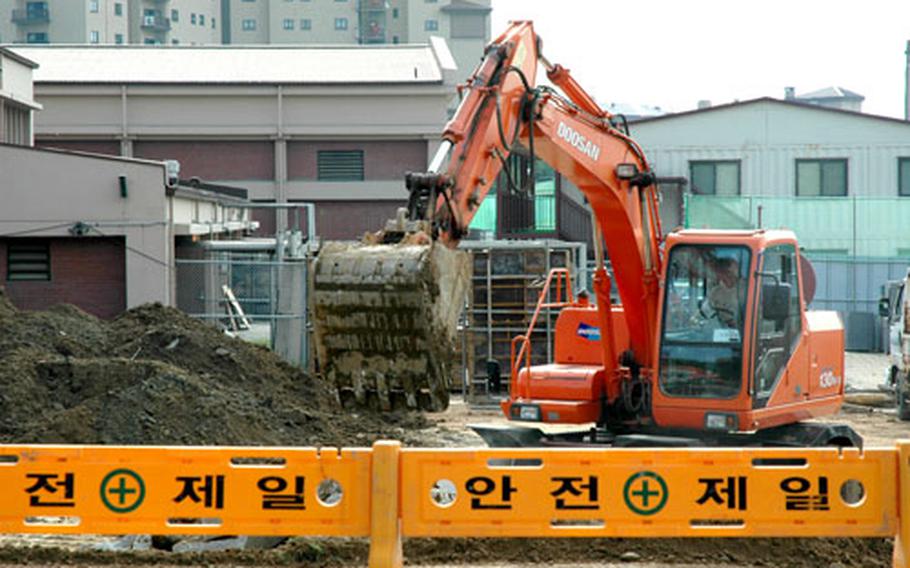 Construction crews work to clear a plot for an expanded part of the high school at Osan Air Base last week. The expansion will be two stories and will house eight classrooms. It’s part of a $20.7 million project that also will include a new middle school and a three-story parking structure. (Teri Weaver / S&S)

OSAN AIR BASE, South Korea &#8212; A two-year construction project at Osan Air Base will add a middle school, new classrooms at the high school and a 383-space parking garage to the base, according to base officials.

The $20.7 million project also includes tennis courts, a basketball court and a running track on top of the garage, according to Air Force Maj. David C. Meissen, commander of the 51st Civil Engineer Squadron at Osan.

The need for the new classrooms comes as more military assignments at Osan allow airmen to bring their families.

The number of accompanied tours &#8212; military assignments that pay for family members to live abroad &#8212; has increased from 375 to 500 airmen, according to Meissen.

The middle and high school&#8217;s enrollment is about 380, and it is not expected to change in the next year, according to DODDS Pacific spokesman Charles Steitz.

Demolition on the Burger King and Popeyes across from the current high school is scheduled to begin Sept. 4 to make way for the parking garage.

Crews have begun working on a space east of the high school, the home of the future expansion.

Meissen said both of those projects should be completed in time for the 2008-09 school year.

The middle school is expected to open the following school year, in fall 2009, he said.

During this school year, teachers and school staff will use a nearby housing garage for parking.

The new parking garage will be open to school staff, commissary shoppers and other base residents, he said.

None of the construction plans should affect the elementary school, Meissen said.

The U.S. government will pay for the eight new classrooms at the high school.

The South Korean government will pay for the balance of the project, including the new sixth- to eighth-grade middle school, a new music building and the parking garage, Meissen said.

At Humphreys, an Army base 14 miles away, the military also plans to build new schools as part of the overall scheme to consolidate U.S. troops in South Korea and triple the size of the base in Pyeongtaek.

Plans for those schools are still in preliminary stages, according to a Humphreys spokesman.

Three years ago, an influx of families at both Osan and Humphreys strapped the classroom space at schools on both bases.

School and military officials erected temporary class space to address the problem then.

At Osan, a new Burger King and Popeyes are expected to open next year across from the bowling alley.