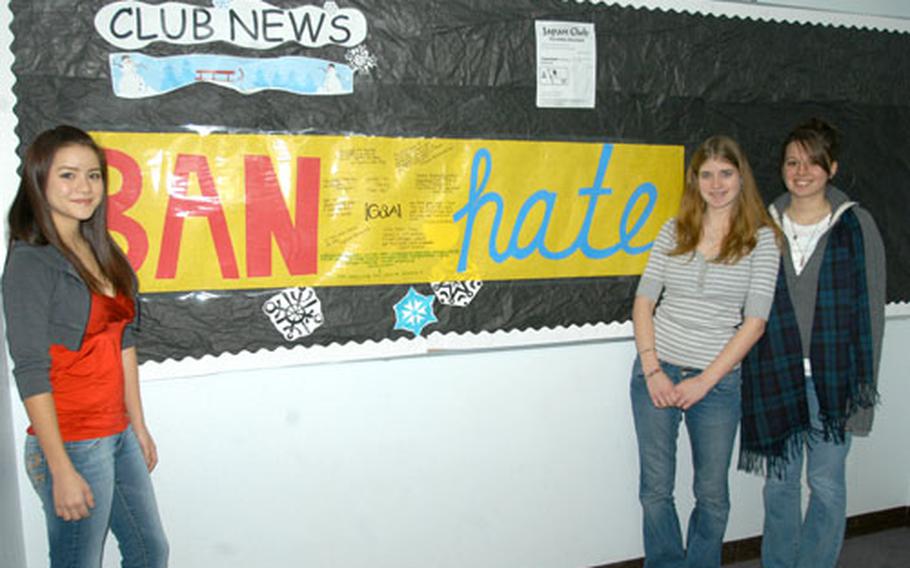 Emely Vallee, left, Samantha Cannon, center, and Stephanie Wehrung stand in front of a Gay-Straight Alliance banner in the hallway of Robert D. Edgren High School at Misawa Air Base, Japan. The new club at Edgren was formed to promote tolerance and awareness of others&#39; differences. (Jennifer H. Svan / S&S)

Emely Vallee, left, Samantha Cannon, center, and Stephanie Wehrung stand in front of a Gay-Straight Alliance banner in the hallway of Robert D. Edgren High School at Misawa Air Base, Japan. The new club at Edgren was formed to promote tolerance and awareness of others&#39; differences. (Jennifer H. Svan / S&S) 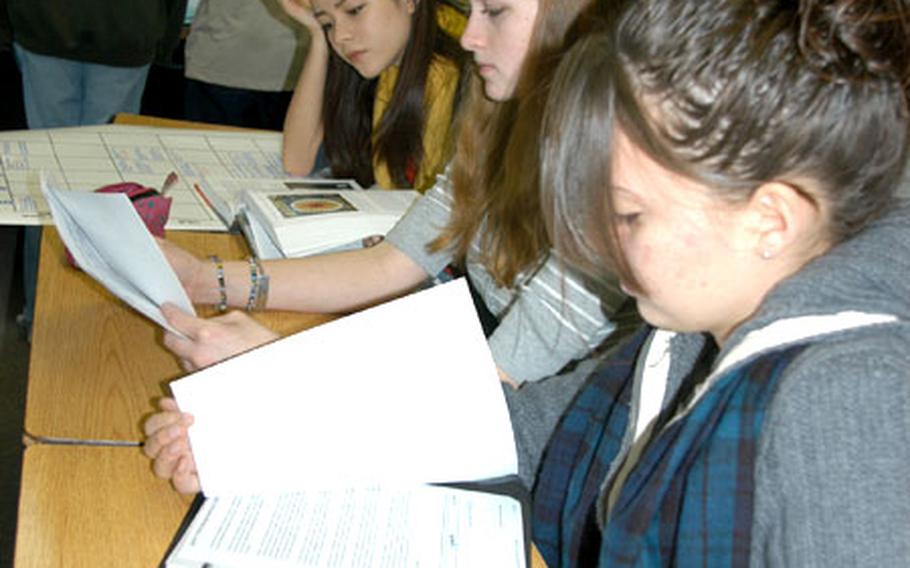 Amid a controversy that put their club and motives under intense scrutiny, and a struggle to be given the same rights as other non-curricular groups in their school, they persevered.

It&#8217;s believed to be the first official club of its kind in Department of Defense Dependents Schools-Pacific, though DODDS officials couldn&#8217;t confirm that.

Vallee and Cannon, the student body president and vice president, respectively, said they wanted to form a club to help other students. They heard about the GSA through another friend and found the GSA network online, which guides students on how to form a GSA in their school.

&#8220;We wanted to promote tolerance, spread awareness and try to stop the use of derogatory terms within in our own school,&#8221; Cannon said.

The club has met three times, with attendance ranging from seven to 10 students.

&#8220;At the second meeting, I was so impressed with the level of conversation,&#8221; she said. &#8220;There was never anything sexual. It was a philosophical discussion on tolerance and current events. I haven&#8217;t heard that kind of discourse since I left college teaching.&#8221;

The club, she added, is trying &#8220;to get rid of disparaging language that happens in the classroom,&#8221; including labeling and stereotyping.

When Vallee passed around a sign-up sheet for the club, one student expressed hatred for gays and used a derogatory term for them.

Some classmates have questioned the seniors&#8217; motives for forming a GSA.

&#8220;This sounds like a few straight people trying to cause trouble,&#8221; Cannon said a person told her.

Vallee, Cannon and Wehrung feel they&#8217;ve had to fight for the club because of the controversy sparked after word spread in the community of the GSA and the temporary restrictions on club activities that followed.

Edgren Principal Michael Johnson said he received phone calls, e-mails and personal visits from parents mostly concerned with the word &#8220;gay&#8221; and worried that GSA &#8220;was going to be an advocacy group for a gay lifestyle.&#8221;

Johnson initially approved the club after he was approached by Cannon and Vallee in early September.

About two weeks later, the students said, he asked the seniors for a statement of purpose.

Johnson said having that information helped him field inquiries about the group from community members, military officials and his bosses.

But problems for the GSA didn&#8217;t crop up until November, Cannon said, when following a School Advisory Committee meeting, GSA was restricted from privileges afforded to other non-curricular clubs: passing out fliers, announcing meetings over the school public address system, fundraising and meeting during seminar, a type of study period during the school day.

SAC members, including parents and teachers elected from the community and schools, advise the principal on education-related matters, according to the school&#8217;s Web site.

&#8220;There were three parents who showed up (to the SAC meeting) who were just unsure,&#8221; Johnson said, referring to GSA.

The students fought back. Wehrung filed a formal complaint, she said, which was closed after other non-curricular clubs, such as paintball or ski and snowboard, were given the same restrictions, the students said.

That question could not be immediately answered.

Shortly before winter break last month, restrictions on all non-curricular clubs were lifted, including GSA. However, all clubs now have to meet after school.

The GSA controversy did not prompt the review, Steitz said.

The club, meanwhile, forged ahead.