School bus security will be as simple as A, B, C 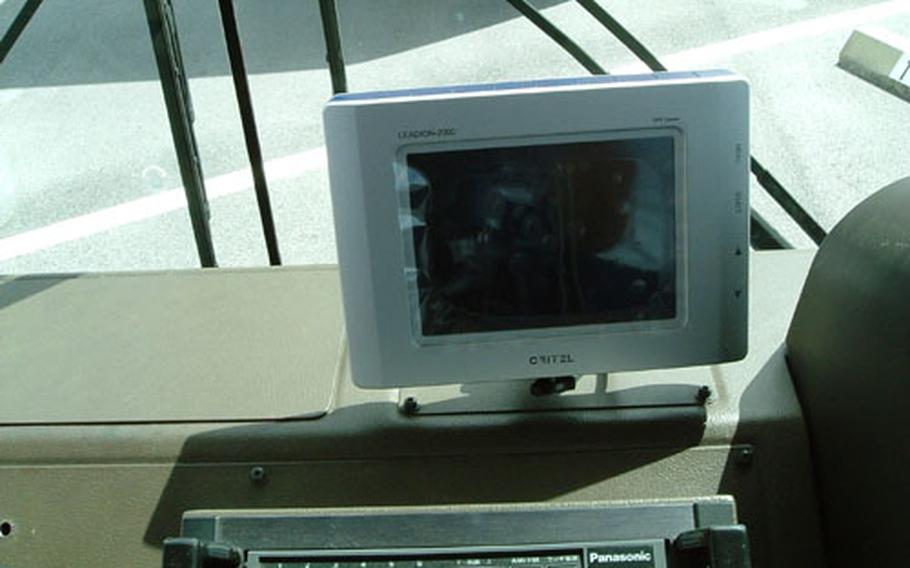 One of the new upgrades this fall to DODDS Pacific school buses in Japan and Okinawa includes a small data screen on the dashboard that bus drivers can use to relay messages to school transportation officials in the event of an emergency. Buses in South Korea already have the equipment. (Courtesy of DODDS Pacific)

A terrorist hijacks a bus full of military kids en route to a sporting event in Tokyo.

The bus driver triggers a remote duress alarm, and within seconds Department of Defense Dependents Schools Pacific officials know which street the bus is traveling &#8212; and its direction and speed &#8212; and they alert law enforcement.

When 24,000 DODDS-Pacific students in Japan, Okinawa and South Korea start school later this month, they&#8217;ll be riding school buses beefed up with technology, including onboard digital cameras and a Global Positioning System (GPS).

&#8220;We&#8217;re utilizing this technology to do the best that we can to ensure the safety of our students riding the buses,&#8221; said Jack Martin, chief of DODDS-Pacific transportation division.

The on-bus cameras for 336 buses in Japan, Okinawa and South Korea cost $1.1 million, Martin said; the vehicle tracking system for 187 buses in Japan and on Okinawa cost $760,000.

The upgrades in mainland Japan and Okinawa include GPS to track the location of DODDS buses and passengers. South Korea&#8217;s DODDS buses have been using the system since 2001.

GPS will enable transportation specialists to track the speed and direction of buses on a detailed electronic map.

A software program installed at student transportation field offices will allow officials to link up and zoom into a bus&#8217; route, Martin said.

The technology also can be used for &#8220;quality-assurance purposes,&#8221; Martin said, recording the time a bus takes to finish its assigned route, for example.

Part of the upgrades is a duress alarm that bus drivers or security attendants can activate remotely, notifying the transportation office personnel of an emergency.

Bus drivers also will be able to communicate by cell phone or e-mail via a mobile data terminal &#8212; a mini-screen on the dashboard.

While GPS can locate the buses, passengers will be tracked through wireless electronic scanning technology.

Starting in January, DODDS students in Japan and Okinawa will be issued new bus passes embedded with a digital identification code that will be scanned each time they board or exit the bus.

Students in South Korea already have the pass.

To reduce disciplinary problems and vandalism, all buses in Japan, South Korea and Okinawa will be equipped with four digital cameras that record in color.

Buses previously had cameras, but they utilized unreliable 8-mm videotape; the images often were fuzzy, the sounds inaudible, and the camera didn&#8217;t capture everything inside the bus, Martin said.

The new cameras will record up to five days of data before re-recording.