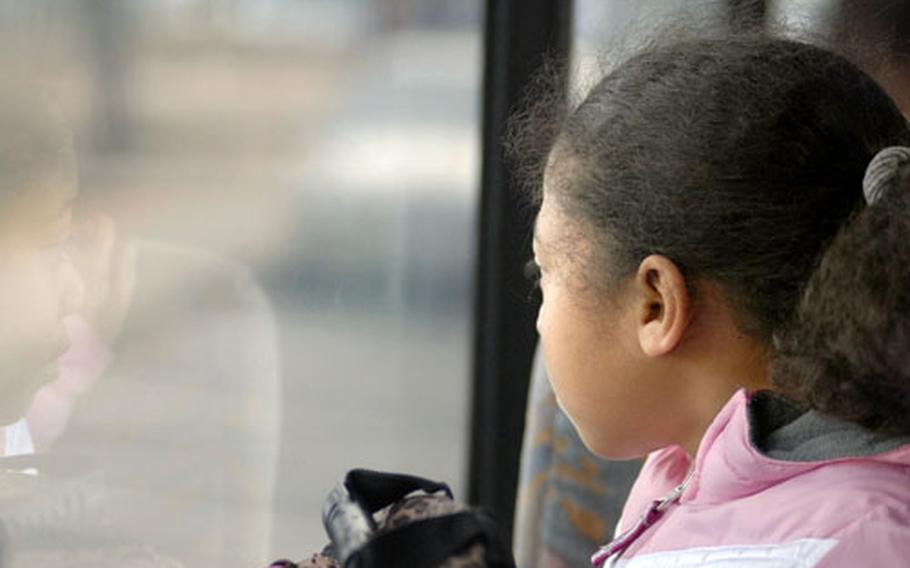 Jasmyne Murphy, a third-grader at Kaiserslautern Elementary School in Germany, gazes out of her bus window on the last day of school before Christmas break. (Ben Bloker / S&S)

Jasmyne Murphy, a third-grader at Kaiserslautern Elementary School in Germany, gazes out of her bus window on the last day of school before Christmas break. (Ben Bloker / S&S) 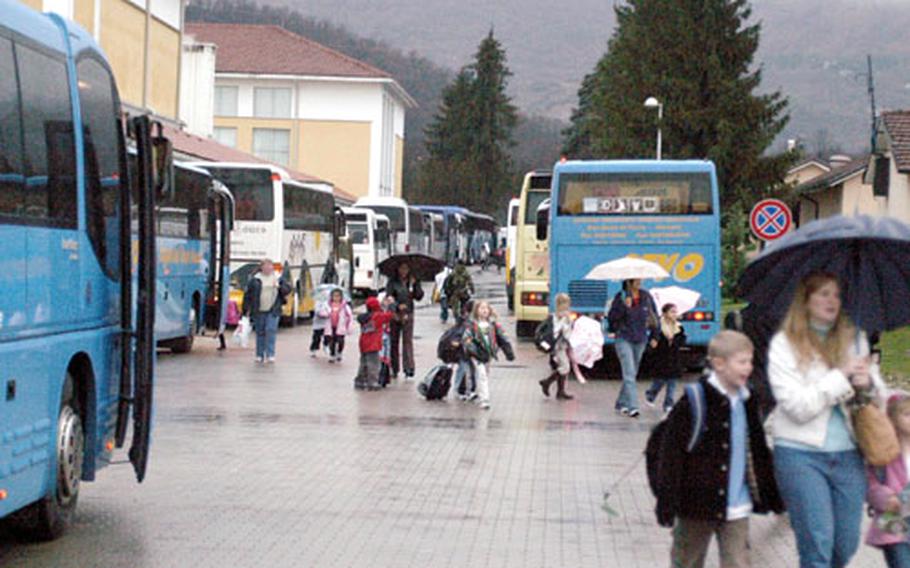 Parents and children walk by buses lined up after school on a rainy afternoon at Aviano Air Base, Italy. (Kent Harris / S&S)

The following correction to this story was posted Dec. 30: A Dec. 27 story about school bus safety should have stated that about 120 of the average of 137 people who die annually in school transportation accidents are motorists who die in collisions with the buses. In addition, according to the latest figures from Kansas Department of Education&#8217;s School Bus Loading and Unloading Zone Survey, 13 children nationwide were killed in the danger zone immediately outside the school bus in 2005-2006.

A crash last month that killed four students in Alabama has renewed attention on the issue of school-bus safety.

Four students died in the Nov. 20 accident, in which their bus plunged off a highway overpass after being struck by a car in Huntsville.

In the States, accidents involving vehicles carrying students are essentially a daily occurrence. An average of 137 people have died in school transportation accidents annually the last decade, according to the National Highway Traffic Safety Administration.

At Department of Defense Dependents Schools in Europe, however, no student has been killed or seriously injured in a crash directly involving a bus since two incidents in 1996, according to Dave Sieber, chief of the agency&#8217;s logistics division.

The schools rely on local contractors who use a variety of buses, many of which don&#8217;t resemble the traditional yellow ones in the States.

On Nov. 7, 1996, a student attending school at RAF Lakenheath in England was killed when he was hit by a bus he had just exited. The student had stopped in front of the bus and was struck by the bus driver, who couldn&#8217;t see him.

Also that year, several DODDS students were sent to the hospital following an accident in Germany. The bus, which was in poor repair, was traveling between Munich and Bad Aibling when the driver lost control.

As in the States, more children in DODDS schools are hurt going to and from the bus than riding it.

The most serious accident this school year was last month at Aviano Air Base in Italy, when a seventh-grader slipped on the last step and fell hard, requiring a brief hospitalization and a pair of braces as a precaution.

This school year, buses contracted by DODDS-Europe have been involved in 13 accidents. Eleven caused no injuries. The other two resulted in three total injuries, none of which required medical treatment.

In the previous school year, DODDS-contracted buses were involved in 40 accidents, according to DODDS data. Thirty-two resulted in no injuries to students. The eight others caused minor injuries to 20 total students.

The most serious accident last year was outside the school bus and also at Aviano. A student was hit by a vehicle while crossing the street and suffered leg and shoulder fractures.

Sieber said the school system&#8217;s safety record is due to its education program. The school system teaches students bus safety twice a year, doesn&#8217;t tolerate horseplay on buses and requires extra safety features on buses (such as more mirrors).

European traffic rules generally don&#8217;t favor buses as much as they do in the States. For instance, vehicles in Europe &#8212; unlike in thr States &#8212; generally are allowed to pass buses that are dropping off or picking up students. And vehicles aren&#8217;t always required to stop for people at crosswalks.

Many of those calling for changes after last month&#8217;s deadly bus crash in Alabama question why most school transportation vehicles in the States don&#8217;t have seat belts.

Others aren&#8217;t sure that adding seat belts would save lives and argue they&#8217;d cost too much for school districts that are generally strapped for cash.

In the United Kingdom, DODDS pupils are required to wear seat belts because of a host nation law, according to Dave Sieber, chief of the logistics division for the Department of Defense Dependents Schools-Europe.

An accident involving British pupils before DODDS took over the bus routes in Europe prompted the rule.

Elsewhere in Europe, seat belts are generally required only for vans that transport 16 or fewer passengers. Otherwise, most passenger buses &#8212; including the ones DODDS contracts with &#8212; don&#8217;t have them installed.

Sieber said that since such buses are higher off the ground, passengers generally are above the point of impact in an accident. And bus seats are designed to absorb impact during a collision.

He declined to say whether DODDS would welcome all of its contractors adding seat belts. Several reports in the States that say installing lap belts might cause more injuries in an accident, he said.

Since 1996, no DODDS-Europe pupil has been seriously injured or killed in a school-bus accident. Below is a breakdown of minor injuries related to student transport. Of those, only one required medical attention.

Rules of the road

These are Department of Defense Dependents Schools-Europe’s bus safety rules:

¶ Obey the driver or adult on board the bus.

¶ Enter and leave the bus safely and always show the driver your pass.

¶ Keep hands, feet and the rest of your body to yourself.

¶ Never throw any object on the bus.

¶ Never put anything outside a bus window.

¶ Maintain decorum, speak quietly, do not disturb the driver or other passengers.

¶ No profanity, indecency, smoking, prohibited items or vandalism will be tolerated.