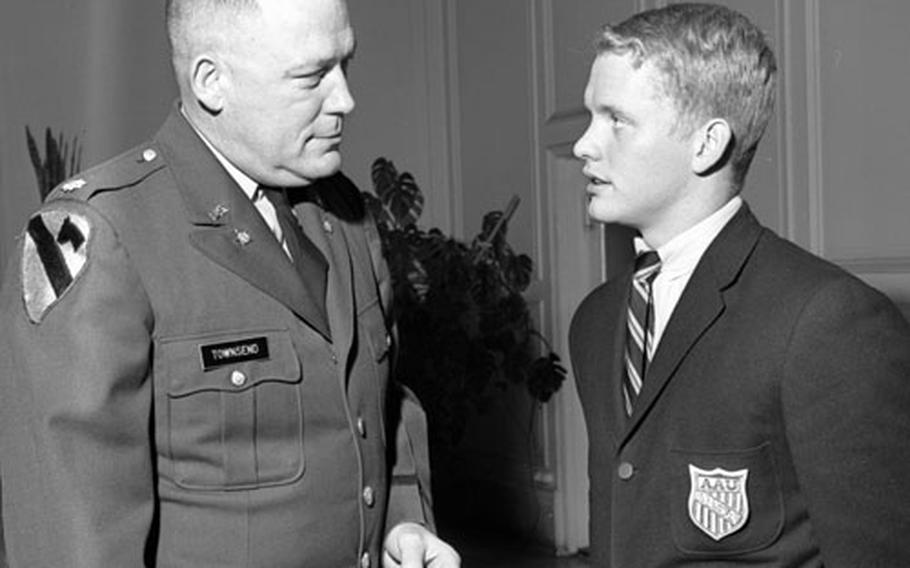 STUTTGART, Germany — They had heard it or read it somewhere before that the Yankee hero of the 1964 Olympic Games — acclaimed by the sports world at the age of 18 — is a modest teenage lad who could easily pass as "the kid next door."

And when Don Schollander stepped from the airliner here at Stuttgart's Echcherdingen Airport, a small army of reporters, photographers and official greeters — German and American — realized they had not been misinformed.

Schollander, first Olympian to win four swimming gold medals, did look like the typical American teenager. Not too tall, not too short, blonde, blue-eyed, pink-cheeked, smiling shyly ... Schollander was certainly the movie or television prototype of an all-American boy.

The Olympic swimming champ flew into Stuttgart Thursday en route to Baden Baden, Germany, where he will be honored at a banquet Friday night by the International Sports Correspondents (ISK), a German sports news service based in Stuttgart. He will be visiting in Germany until Jan. 12.

The ISK has named Schollander as the "world's best athlete for 1964," an honor won by Russian high jumper Valery Brumel in 1963. Don is the first foreign winner of the award — inaugurated in 1947 — to come to Germany and accept it. Olympic decathlon champion Willi Holdorf will be honored as Germany's top athlete of '64.

Last month, the Lake Oswego, the Oregon youth won a similar award when he was voted "sportsman of the year" by United Press International, once again succeeding Brumel.

Schollander rocketed to world fame last October when he stroked to victory in the 100 and 400-meter freestyles and swam legs on victorious U.S. 400-meter and 800-meter freestyle relays. He was the ringleader of America's teenage splash pack which swept up 13 of 18 swimming gold medals.

Millions of televiewers throughout the world, including the Germans who are honoring him, saw the Oregon youth stroke to his quadruple triumphs.

Life has been different since Schollander returned to his suburban Portland home 2½ months ago. He is now a celebrity and he can't escape it.

"You've no idea of the amount of mail and phone calls I've received since returning home. My parents help me handle much of it. There are requests from all over to make appearances and naturally I can't accept them all.

"Just as I was leaving the AAU office in New York before flying to Germany I received a call from Milwaukee where they want me to appear February 1."

In fact, Schollander has been kept so busy since the Olympics that he has hardly touched the water, and that's quite a departure for someone who has devoted nine years of his life to swimming — training six hours each day.

"I'm definitely out of shape now," he admitted. "In fact I worked out for the first time just before leaving for France last month."

The well-traveled freestyle ace flew to France for exhibitions at Marseilles and a visit to Paris. So this is his second trip to Europe in less than a month. He has also been to Japan three times and to South America (for the Pan American Games).

"I'd like to visit Africa, too," said Don. "I nearly went there once for swimming exhibitions, but the segregation issue cancelled the trip."

The world traveling and hectic life of a sports celebrity will end abruptly for Don next month when he enrolls as a freshman at Yale University.

Schollander stressed that he is not going to Yale on an athletic scholarship. "They don't offer them there," he said. Scholarships are based on need and academic record in high school.

But you can bet that the reputation of Yale's swimming program influenced Don's college choice. He plans to major in psychology and then study medicine. He hopes to do his internship and first year residency as a Navy or Army doctor. But he's also hoping to defend his Olympic titles at Mexico City in 1968.

Swimming in collegiate meets for the Yale freshman may seem like a big comedown from the glory of Olympic competition in Tokyo. But Don doesn't feel that way. about it.

"I'll have no trouble getting up for the meets," he said, "it'll be a challenge for me just to get into condition."

And how about the AAU-NCAA squabble over amateur athletic control? As an athlete who has learned his trade through nine years of competition in AAU-sanctioned age group meets, Schollander will now be "crossing over the line" into the NCAA domain as a student at Yale.

But Schollander made it clear that his allegiance will be with his college and that Yale's leaning is with the AAU.

"I feel sure that Yale will pull out of the NCAA and side with the AAU if it comes to a showdown over sanctioning meets," said Don.

He pointed out that the Ivy League had recently declared its independence from control of competition by the NCAA and its affiliate, the U.S. Track and Field Federation. And Yale was the first to defy the NCAA by entering a token track squad in an AAU-sanctioned indoor meet.

Schollander's trip to Germany was arranged — at the ISK's request — by the AAU, with USAREUR sports chief Lt Col Emmett Townsend opening the way.

Townsend is the AAU's representative in Europe. He was on hand for Schollander's arrival Thursday and was pleased to see that Don was wearing a blazer with an AAU emblem when he arrived.

The oft-criticized AAU could not have picked a better representative to send abroad. Schollander's poised, yet modest and polite manner, and his well-scrubbed, "picture-of-health" looks — not to mention his well-publicized athletic achievements — will go a long way in enhancing the image of the AAU as well as the United States.