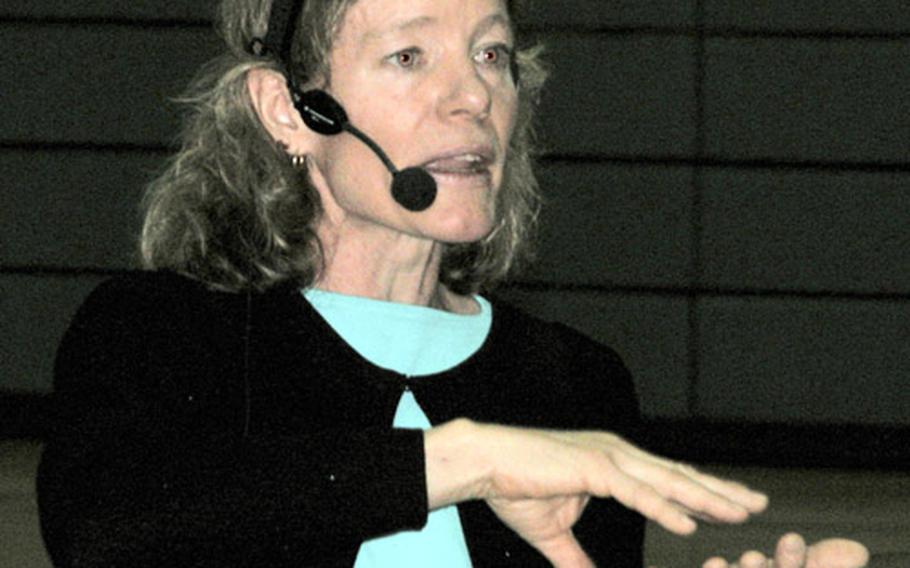 Buy Photo
Stacy Allison, the first American woman to reach the top of Mount Everest, gives a motivational speech to the troops in Bamberg, Germany, on Wednesday. (Geoff Ziezulewicz / Stars and Stripes)

BAMBERG, Germany &#8212; Success in life is akin to successfully climbing the tallest mountain in the world. That&#8217;s the message that Stacy Allison, the first American woman to scale Mount Everest, conveyed to soldiers Wednesday morning at Warner Barracks.

Allison conquered the more than 29,000-foot peak in 1988 on her second try, and she&#8217;s been working as a motivational speaker for about a decade.

Many of the trials Allison said she experienced while twice trying to climb Everest contain life lessons applicable to all.

Allison started the morning by telling the approximately 50 people in attendance about her first failed trip up the mountain, and what it&#8217;s like to live in a tiny snow cave for days on end.

The audience sat rapt as Allison told of the crew having to drink water from one bottle and urinate in another throughout the night, as winds and storms howled outside. Allison then parlayed the urine bottle experience into a life lesson for the soldiers and dependents.

On the second trip, Allison and her team walked about 125 miles to get to the peak, up high ridges and down into low valleys. Along the way, they hiked through forests full of leeches. At one point, Allison said she was covered with the bloodsuckers.

As the crew approached the heralded summit on that second trip, some local guides backed down, taking oxygen supplies with them. The remaining members picked numbers to choose who would get the oxygen to continue on. Allison won.

People are like the intricate snow crystals on the side of Everest, she said.

After the speech, she said she tailors her motivational speeches to the audience. A corporate boardroom would get a different address than the soldiers got.

After the speech, as soldiers received free copies of Allison&#8217;s book and an autograph, 2nd Lt. Travis Brown of the 82nd Engineer Battalion said he enjoyed the speech.

An individual might like to do many things, but their passion is singular, Allison told the crowd, encouraging the audience to find their passion.