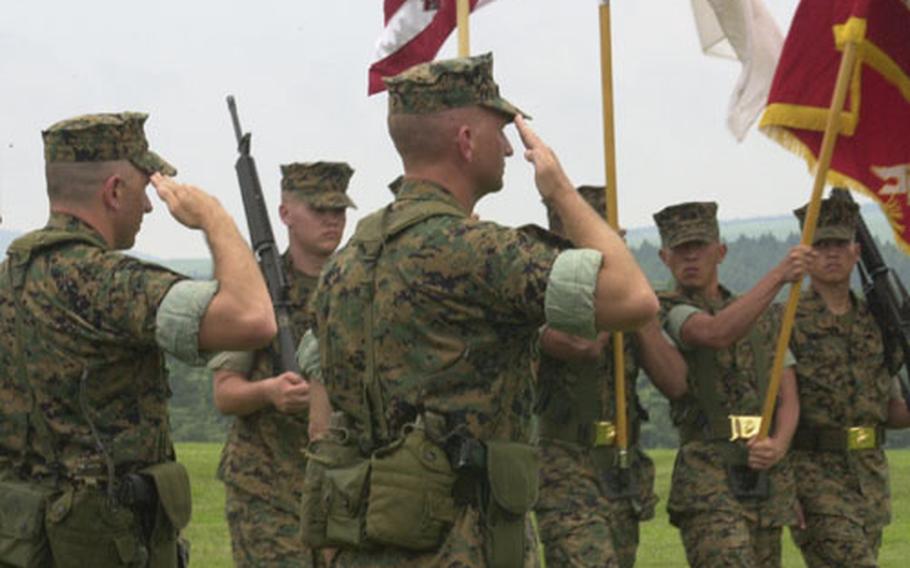 Col. Henry Donigan III and the new Commanding Officer of Camp Fuji, Col. John J. Jackson, salute the flag during the pass and review at the change of command. (Jim Schulz / S&S)

Col. Henry Donigan III and the new Commanding Officer of Camp Fuji, Col. John J. Jackson, salute the flag during the pass and review at the change of command. (Jim Schulz / S&S) 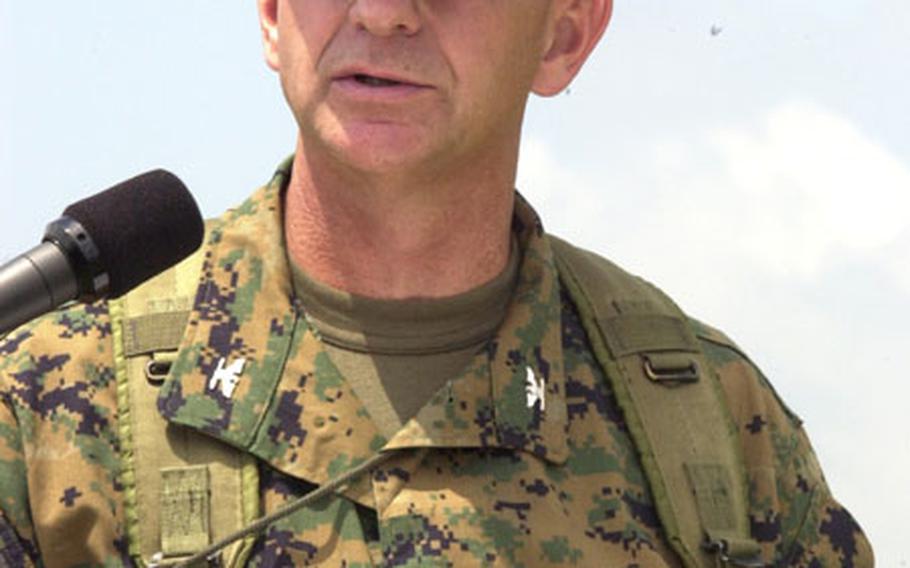 CAMP FUJI, Japan &#8212; Since 1977, this tiny Marine Corps base on the Kanto Plain has had 29 commanding officers. All stayed for a year or less on a remote, unaccompanied tour, except Col. Henry J. Donigan III.

Because he was single, Donigan, who turned over his job to Col. John J. Jackson at a change-of-command ceremony here Friday, agreed to a two-year tenure when he arrived at Camp Fuji in July 2001.

But a funny thing happened to Donigan in Japan: He got married.

For his service to Camp Fuji, he was awarded the Legion of Merit on Friday. Under Donigan&#8217;s leadership, Camp Fuji&#8217;s 225 Marines and sailors saw major quality-of-life improvements, including the opening of a Community Services Center with a small exchange, food court, barbershop and restaurant.

Donigan said he&#8217;s most proud of helping to bring higher education to Camp Fuji. With the opening of the new education center, college enrollment expanded from four students &#8212; who traveled to other installations for classes &#8212; to 73 students, who took most of their courses at the camp.

Still, Camp Fuji is without some amenities taken for granted at other U.S. military installations in Japan, including a commissary, movie theater and golf course.

Camp Fuji&#8217;s military personnel support Marine units from Okinawa that deploy there for training. A combined-arms facility, Fuji is the only U.S. Marine Corps installation in Japan where certain live-fire artillery training is permitted.

Jackson, for his part, said he wants to carry on the training traditions at Camp Fuji and maintain the cooperation with the Japan Ground Self-Defense Force and local government officials. The new commander said he isn&#8217;t planning any immediate changes.

Jackson comes to Camp Fuji from the Pentagon, where he worked in the Office of the Director, Joint Staff. He was commissioned into the Marine Corps in 1977 after graduating from the University of Utah and serving briefly in the Army.

He&#8217;ll lead Camp Fuji for a year while his family remains in the United States.

&#8220;Being married for 27 years and raising four children amongst all the deployments, conflicts and hours away from home,&#8221; he said.