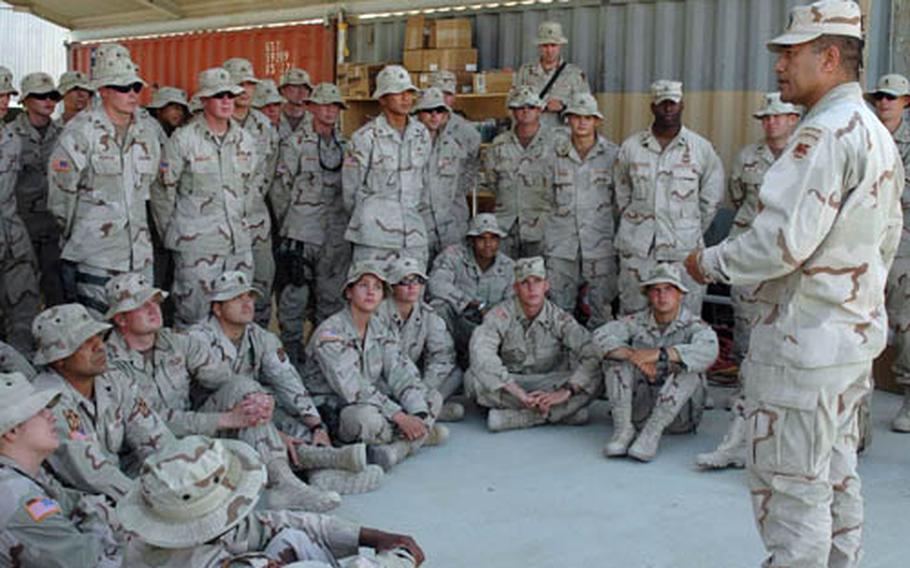 HEIDELBERG, Germany &#8212; Ask Command Sgt. Maj. Iuniasolua Savusa about his combat experiences, and he clams up.

The book is about Operation Anaconda in Afghanistan, designed to rout al-Qaida fighters in 2002. It describes a mission marred by bad Central Command planning and miscommunication &#8212; then saved from disaster by superb special forces, helicopter pilots and regular Army NCOs.

Savusa was one of those noncommissioned officers, command sergeant major for Task Force Rakkasan, 101st Airborne Division (Air Assault) &#8212; and "an imposing slab of Samoan muscle whose professionalism set a tremendous example for the brigade&#8217;s enlisted soldiers," according to the book.

Savusa landed under fire, and he takes pride in the fact that of his 1,411 soldiers, "Everybody lived to tell about it."

Savusa, U.S. Army Europe&#8217;s outgoing command sergeant major, an Army Ranger and the highest-ranking Samoan in the U.S. Army, doesn&#8217;t enjoy talking about himself. He&#8217;s skeptical of military men who do.

So, go ahead, ask him about that time in Iraq. He demurs.

"Like any leader, when you hear shots fired, you should go in that direction," he said. "That&#8217;s what happened. I went in that direction, got there and helped soldiers focus on where to go for cover, to provide suppression and to eliminate the target."

A 2005 Defense Department publication was more direct: "His convoy was ambushed, he grabbed a grenade, walked within 30 yards of the tree line and tossed the grenade, killing two Iraqi fighters in the process," it said.

He won&#8217;t mention it, but he was among 10 enlisted soldiers who appeared on the "Late Show with David Letterman" in February, 2002, to deliver the Top 10 "Good Things About Being Stationed in Kandahar."

After two years at USAREUR, Savusa is deploying to Afghanistan again. He&#8217;ll rejoin Gen. David McKiernan &#8212; until last month USAREUR commander &#8212; as his command sergeant major for NATO forces. There, as at USAREUR, his job will be to advise McKiernan on matters relating to enlisted soldiers and support McKiernan&#8217;s initiatives.

It will be Savusa&#8217;s fourth deployment, as he turns 50 and just became a grandfather.

"I would rather wear a Kevlar and an IBA (interceptor body armor), and dodge bullets in the streets of Baghdad, or in the hills of the Himalayas in Afghanistan, than to be wearing a suit and tie in one of those corporate boardrooms," he said recently in a speech to a group of new sergeants. "Listen, you&#8217;re going into combat, weird stuff happens, people die," Savusa told them. But, he said, "Focused leadership will always carry the day."

During his own farewell ceremony, McKiernan called Savusa "the finest soldier on the field."

Savusa wasn&#8217;t expecting that, he said, but working with McKiernan, who had previously commanded Iraq&#8217;s land invasion, was "like hitting the jackpot."

The two share a soft-spoken, self-effacing style, and they were like-minded on many matters, including training new leaders, in the U.S. Army and in the armies of allies and potential allies.

The Warrior Leader Course at Grafenw&#246;hr nearly doubled its enrollment during Savusa&#8217;s USAREUR tenure. He saw that the training was revamped to reflect today&#8217;s combat, and that soldiers from NATO and eastern European countries were enrolled. He also recruited more instructors from the ranks of soldiers returning from a combat deployment. "Your purpose is to make everybody subordinate to you be successful," Savusa said. "You train them to replace you, and you care for them the way you&#8217;d want someone to care for you."

Savusa joined the Army at 17, with a waiver his mother signed. His choice wasn&#8217;t unusual. The impoverished islands are still known mostly for tuna fishing and devastating hurricanes. Military recruiters have continued to have little trouble meeting their goals, and with a population of some 60,000, the U.S. territory has the highest per capita soldier casualty rate in the nation, Savusa said.

But Savusa turned out to be a natural.

He was the class honor graduate, someone else pointed out.

"Readily will I display the intestinal fortitude required to fight on to the Ranger objective and complete the mission, though I be the lone survivor," Savusa recited.