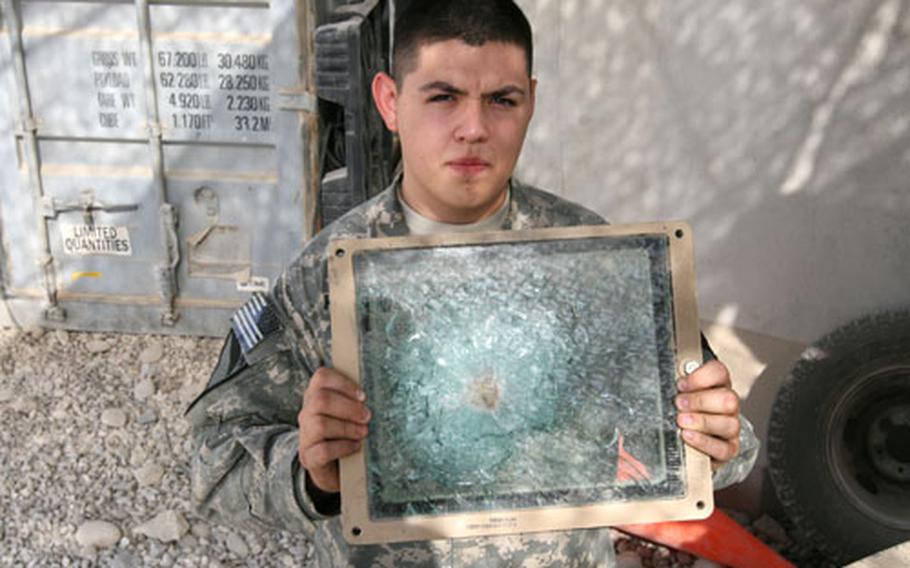 Spc. Gabriel Hernandez, 22, of San Antonio displays a bulletproof face shield that took a direct hit recently from a 7.62mm round fired by insurgents. The shield saved the gunner from being hit in the face. (Drew Brown / S&S)

Spc. Gabriel Hernandez, 22, of San Antonio displays a bulletproof face shield that took a direct hit recently from a 7.62mm round fired by insurgents. The shield saved the gunner from being hit in the face. (Drew Brown / S&S) 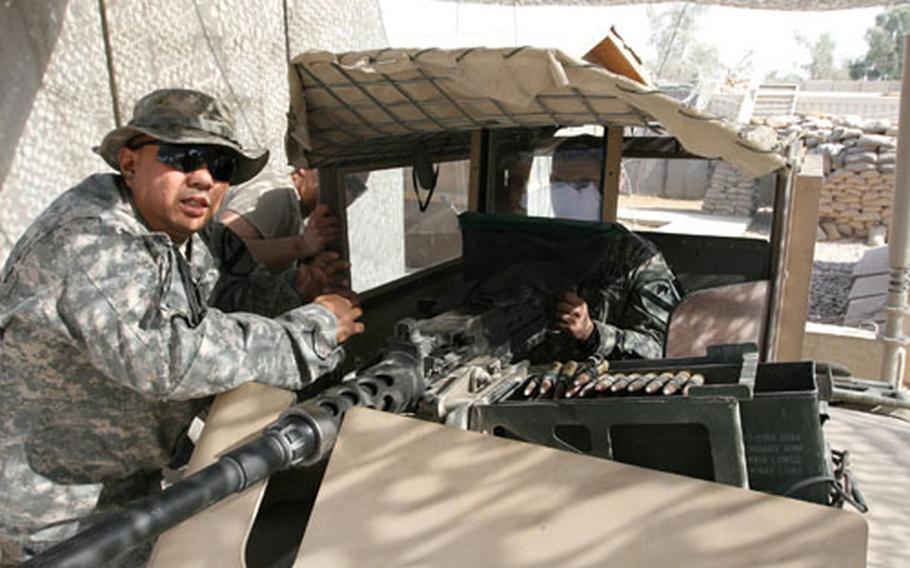 So after two of his buddies, both Humvee turret gunners, were shot in the face by insurgent snipers, Briola decided to do something he hoped would prevent more gunners from getting hit. Although both soldiers survived, he didn&#8217;t want to see any more of his friends share the same fate.

The 36-year-old native of Yigo, Guam, took a glass and metal plate from a bulletproof shield originally designed to protect the commander of a Bradley Fighting Vehicle. He then modified a night-vision sight so the shield could be fitted onto any Humvee turret gun, from a M249 Squad Automatic Weapon and up.

Call it an example of old-fashioned GI ingenuity.

Essentially a thick glass in a steel casing, Briola&#8217;s &#8220;bulletproof face shield&#8221; has already received extensive field testing on his own Humvee, and he&#8217;s made several more for other vehicles in Company A.

Spc. Gabriel Hernandez, 22, of San Antonio is a .50-caliber machine gunner on Briola&#8217;s Humvee. He said that having the shield mounted on top of the gun makes him feel a lot safer.

A Humvee turret gunner is the most vulnerable soldier on the truck.

Briola said he hopes the Army will take notice of his work and make the shield standard issue on all Humvees.

Since his gunner started using the device, Briola said his Humvee has gotten shot at a lot less than before.

Describing himself as an &#8220;avid inventor,&#8221; Briola said he&#8217;s always looking for ways to improve the flaws that can be found in almost every piece of equipment. He&#8217;s designed and made his own deer call; he also created a gun lock for firearms.

He is also designing on an individual cooling system for soldiers operating in hot climates such as Iraq. He hopes to enter it into a contest the Army has announced seeking new designs for such a system.