Sattler: Marines' focus in Iraq will be on training, monitoring Iraqi troops 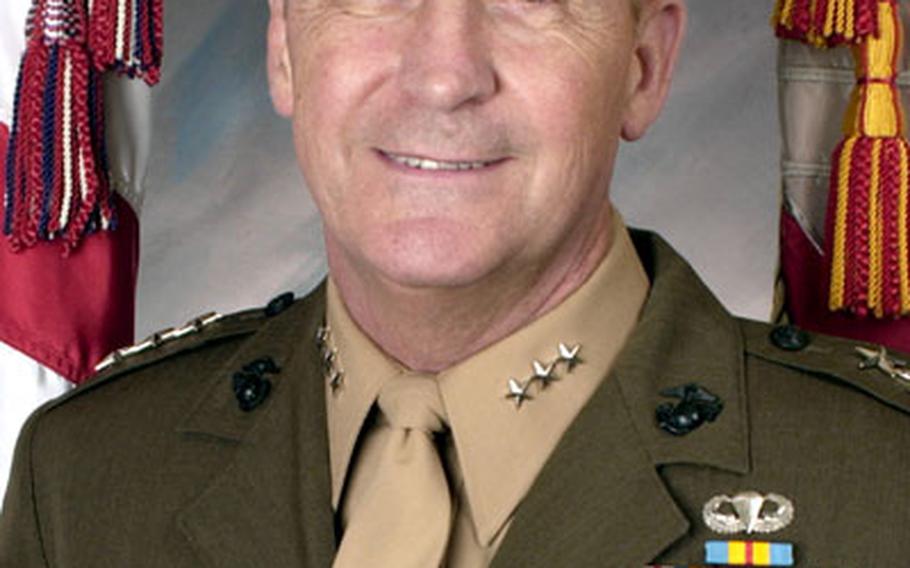 WASHINGTON &#8212; As the I Marine Expeditionary Force heads back to Iraq in January, their new mission will be training and mentoring Iraq troops rather than rooting out insurgents, according to commander Lt. Gen. John Sattler.

Despite the new focus, Sattler said the I MEF will return to Iraq with essentially the same force makeup as they had last year, when the group was involved in heavy fighting with insurgents in Fallujah.

Sattler said he expects to create 10- to 15-person training teams to embed with Iraqi units, who will both train the foreign troops and fight alongside them. The teams, likely headed by O-3s and O-4s, are modeled after similar training squads used in Afghanistan and during the Vietnam War.

The Marine commander also said he stands by his assessment last November that the fighting in Fallujah had &#8220;broken the back&#8221; of insurgents.

On Tuesday, he noted that Fallujah had served as a base of operations before the coalition campaign there, and now the insurgency has been forced underground and is more fragmented.

Marine officials said about 150,000 Fallujah residents have returned to the city in the past seven months. Sattler said he expects the city&#8217;s infrastructure repairs and economic recovery to be further advanced by the time his Marines arrive.

Sattler said that equipment his units left for the II MEF troops is still in good condition, but warned that the harsh desert conditions are aging vehicles and guns at nearly seven times the anticipated rate.

While he doesn&#8217;t believe that will complicate operations in Iraq, he warned that it will result in a large replacement bill when the Marines return for good.