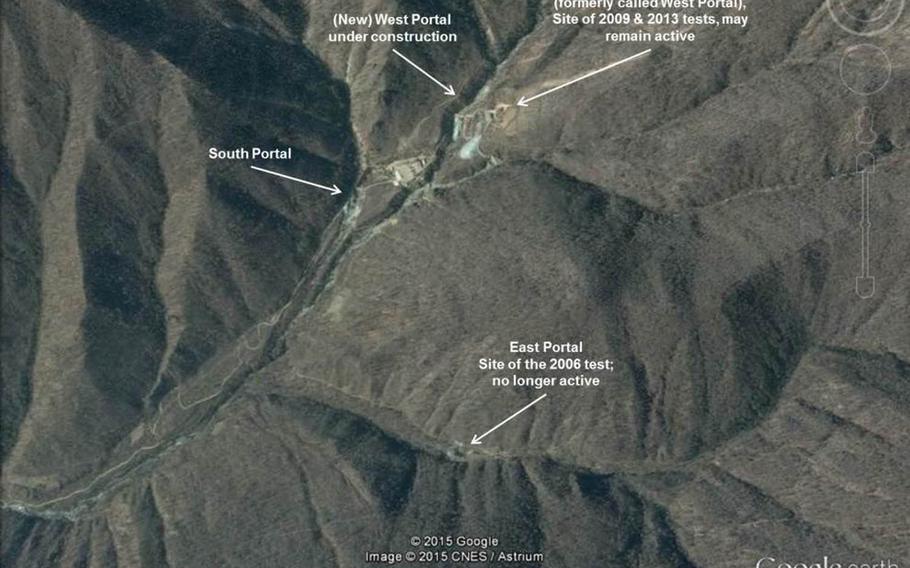 This satellite image from Nov. 2, 2015, suggests North Korea has been constructing a new tunnel for nuclear tests at its Punggye-ri nuclear test site, according to 38 North, a website run by the Johns Hopkins University School of Advanced International Studies, which monitors North Korean activities. (Courtesy of 38 North/Google Eart)

Recent satellite images suggest North Korea is digging a new nuclear-test tunnel, though there are no signs that a blast is imminent, a Washington, D.C.-based think tank reported Wednesday.

Photos taken in October and November show there has been significant construction since spring at the Punggye-ri nuclear test site on the country’s east coast, according to 38 North, a website run by Johns Hopkins University’s School of Advanced International Studies that monitors North Korean activities.

“While there are no indications that a nuclear test is imminent, the new tunnel adds to North Korea’s ability to conduct additional detonations over the coming years if it chooses to do so,” 38 North said.

The commercial images show the tunnel is being dug northwest of the site’s main support area where the North has either conducted nuclear tests or excavated tunnels in the past, the report said. North Korea completed three increasingly powerful nuclear tests at Punggye-ri in 2006, 2009 and 2013.

South Korea’s Yonhap News reported on the tunnel’s construction Oct. 30, citing “the movement of people and cars” at the site.

Japan, South Korea and China recently announced efforts to pressure North Korea to return to five-nation talks on its nuclear program. The North has threatened to use nuclear weapons against South Korea and the United States, although its claims that it can produce a bomb small enough to fit into a missile warhead are unverifiable.