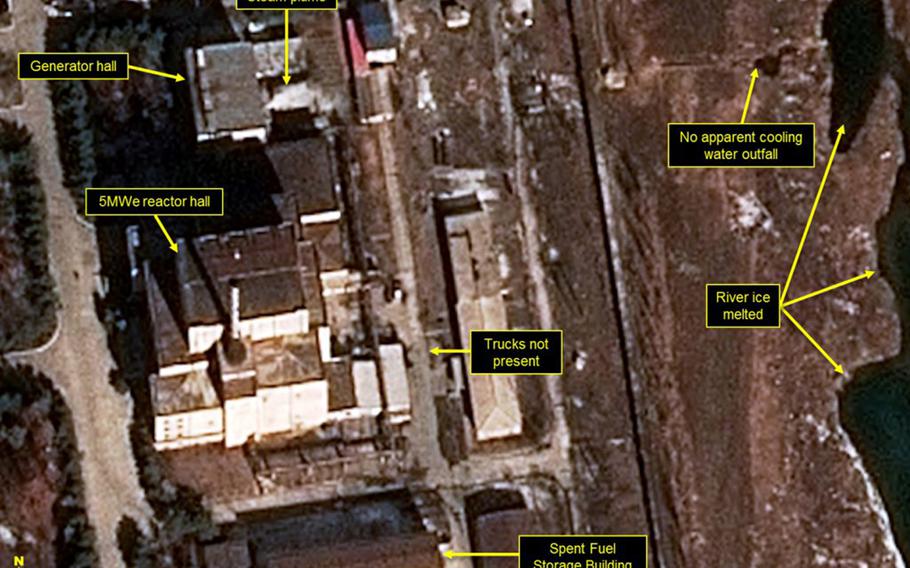 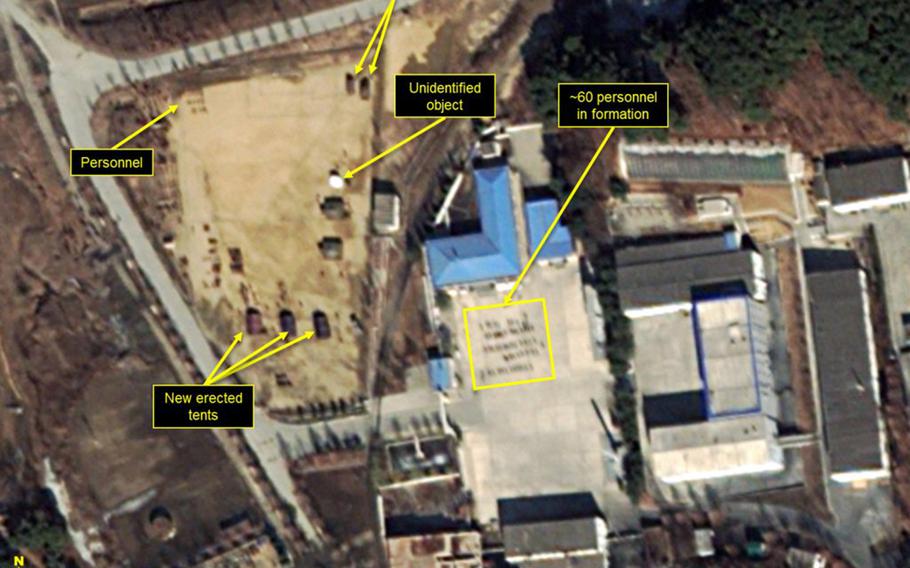 Monday’s report came as the communist state is engaged in rare diplomacy with South Korea that has reduced tensions amid fears of a new conflict on the divided peninsula.

In a remarkable first, North Korean leader Kim Jong Un dined with President Moon Jae-in’s envoys Monday in Pyongyang. It was the first time he has met with South Korean officials since taking over the ruling family dynasty after his father died of a heart attack in 2011.

Analysts said the North is likely sending a signal that it will continue its military programs in an effort to boost its leverage as the South presses it to hold talks with the United States.

38 North said the 5-megawatt reactor at the Yongbyon nuclear complex shows signs of operation, including steam vapor plumes from the generator hall and nearby river ice melt.

The website, which is run by the U.S.-Korea Institute at Johns Hopkins University, examined commercial satellite images from Feb. 17 and Feb. 25.

38 North’s analysts noted that no cooling water discharges have been observed as would be expected under normal operations but said that was likely because the North Koreans had hidden them by extending a discharge pipe into the river.

“If the reactor is operating again, as the evidence suggests, it means North Korea has resumed production of plutonium presumably for its nuclear weapons program,” said the analysis by experts Frank Pabian, Joseph Bermudez Jr. and Jack Liu.

They said the apparent extension of the discharge pipe into the river would make monitoring efforts more difficult as visible indicators decrease over the summer.

The military camp is at the intersection of two roads leading to the radiochemical laboratory and the former fuel fabrication area, which includes the uranium enrichment plant, 38 North said.

“It is unclear what specific role this military camp will play, but it could be to support new construction and/or improve site security,” it added.

North Korea may also be allowing more troops to be seen outside on purpose to play to the satellites and external observers, the website said, noting they could also be holding fire drills or other training and maintenance efforts.

The trucks, including one that had a blue tarp-like material lining its bed, could be used to transport fresh nuclear fuel, carbon dioxide or other materials to and from the reactor.

South Korea’s military declined to comment on the report during a press briefing on Tuesday, saying only that it “has been closely monitoring the North Korean military’s movement related to it in cooperation with the United States.”

Tensions spiked last year as the North test-fired several missiles, including three ICBMs, and conducted its sixth and most powerful underground nuclear test.

The new findings were a dose of bad news after weeks of diplomatic breakthroughs beginning with North Korea’s agreement to join the Feb. 9-25 Olympics.

North Korean athletes and officials also were due to travel to the South this week to participate in the March 8-18 Paralympics.

President Donald Trump has said he’s willing to consider talks with the North, but his administration also has vowed to maintain its campaign aimed at isolating the regime and depriving it of foreign currency that enables its weapons programs.

Moon, meanwhile, reiterated his call for dialogue with the North but stressed that the end goal must be the denuclearization of the peninsula. He also stressed the need to strengthen combined defense capabilities with South Korea’s longtime ally the United States.

“Peace is our survival and a necessary condition for our prosperity. However, without a strong military and robust national defense, we can neither make nor maintain peace,” Moon said Monday during a graduation ceremony at the Korea Military Academy.

Chang Gwangil, a military technology professor at South Korea’s Dongyang University, said the North appears to be employing a two-pronged effort of developing its military power internally even as it launches a peace offensive.

“In this dimension, we should be on our guard continuously and not destabilize our readiness posture,” he said.