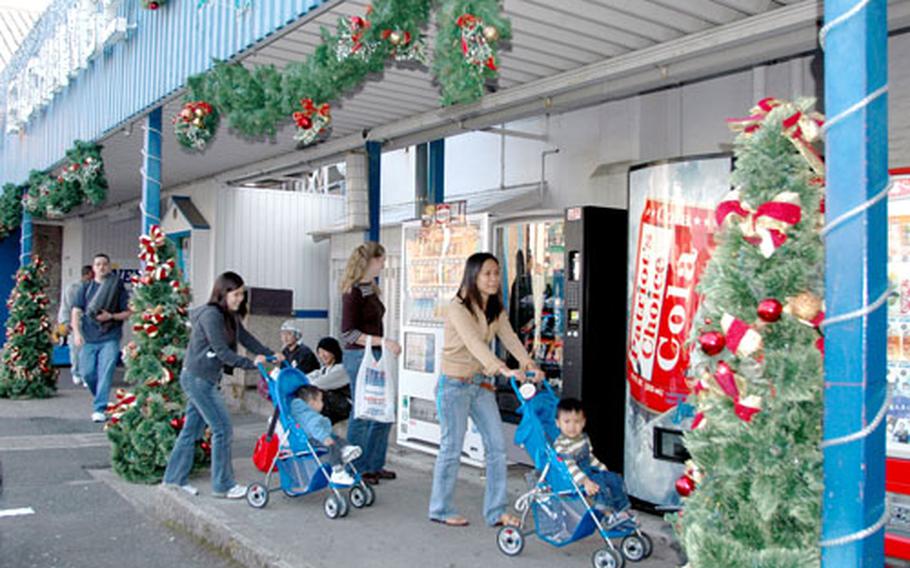 The Navy Exchange at Sasebo Naval Base, Japan, is already decked out with Christmas decorations, and soon much of the rest of the base will be decorated with bright lights, figurines, holly and candy-cane ribbon. (Greg Tyler / S&S)

SASEBO NAVAL BASE, Japan &#8212; This holiday season, Sasebo&#8217;s community will be all dressed up and will be the place to go.

The base&#8217;s first Holiday Lighting Contest is planned for December, a base official said Monday. The contest area will encompass the main gate to base headquarters at the end of Hirase Peninsula.

The goal of the contest, slated to take place annually, is &#8220;to promote holiday spirit as well as dress up the base for our community to enjoy &#8230; giving commands and groups a chance to team-build,&#8221; said Cmdr. Bernard Wang, Sasebo&#8217;s chief staff officer.

&#8220;We encourage all ships, tenants, base departments, community groups and even individuals to decorate,&#8221; he said.

A panel representing major commands and organizations will judge the contest based on overall artistic impression, creativity and safety, Wang said, adding that prizes have yet to be determined.

Registration is open through Sunday, Wang said. Registered commands and groups are required to attend a meeting Monday, at a time to be announced, concerning rules and safety requirements, and decorating projects must be completed by Dec. 11, he said.