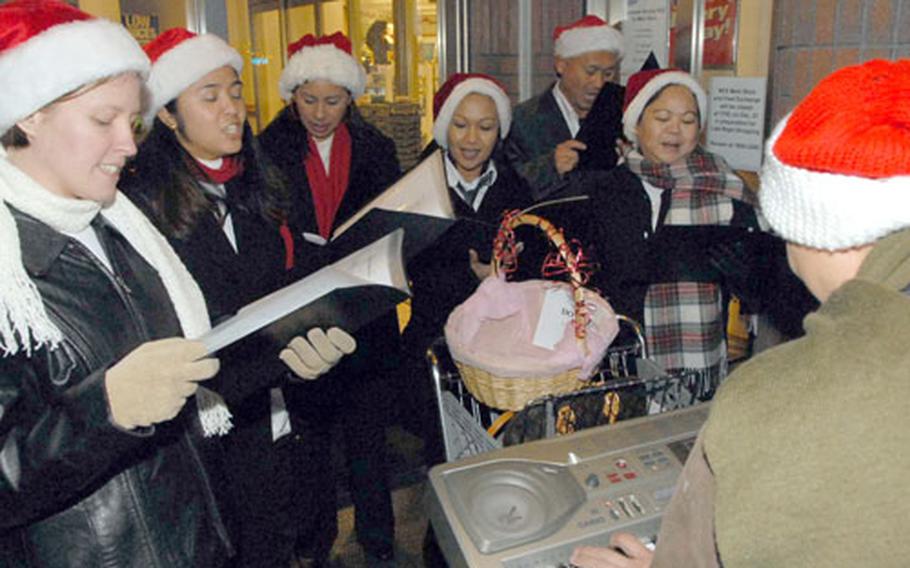 The Commander Fleet Activities Sasebo Carolers warm up Friday in front of the base Navy Exchange. The group was chosen as a semifinalist for NBC’s “Clash of the Choirs Holiday Challenge” earlier this month. (Travis J. Tritten / S&S)

For a local Christmas caroling group, it nearly took them onto nationwide television in the United States.

After submitting a video of a &#8220;Joy to the World&#8221; performance, the Command Fleet Activities Sasebo Carolers received a message from NBC earlier this month &#8212; the group was chosen for a semifinalist slot in the network&#8217;s &#8220;Clash of the Choirs Holiday Challenge.&#8221;

Finalists would be shown performing on the network during the TV special Dec. 17.

The caroling group director, Petty Officer 1st Class Andres Wong, quickly gathered up the entry materials and sent them within a day to Burbank, Calif., just in time for NBC&#8217;s deadline.

&#8220;I was ecstatic,&#8221; said Wong, who believes the break was one of many miracles he has experienced while in the chorale group.

A follow-up from NBC never came and the CFAS Carolers never received their 15 minutes of fame on television.

But that has not dampened the group&#8217;s Christmas spirit and love of singing religious music.

The caroling group has its roots in the Sasebo Filipino-American Association and, since mid-November, its members practiced six hours each week after work, according to Wong.

&#8220;Out of all of the years that I performed with many choirs, in all avenues of artistic endeavors, I have never met a group with as much enthusiasm as I am performing with now,&#8221; said Petty Officer 2nd Class Alex Armour, the baritone of the caroling group.

The CFAS Carolers are &#8220;few, kind of homemade and simple&#8221; but are serious in spreading the spirit of the holiday, Thelma Andaya, member and USO employee, said in an e-mail to Stars and Stripes.

&#8220;Now, we have done our little part in sending a beautiful musical Christmas message to all corners of this earth via the Internet,&#8221; Wong said.