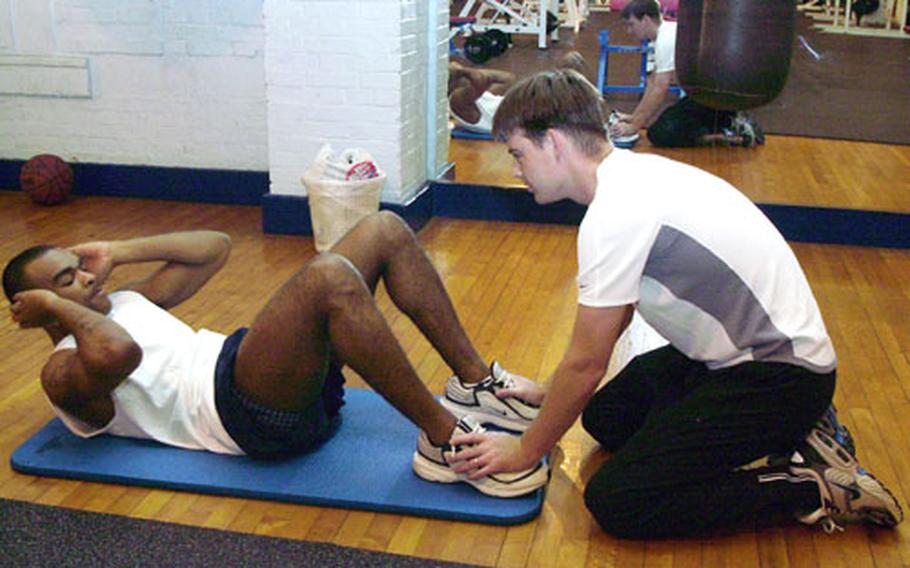 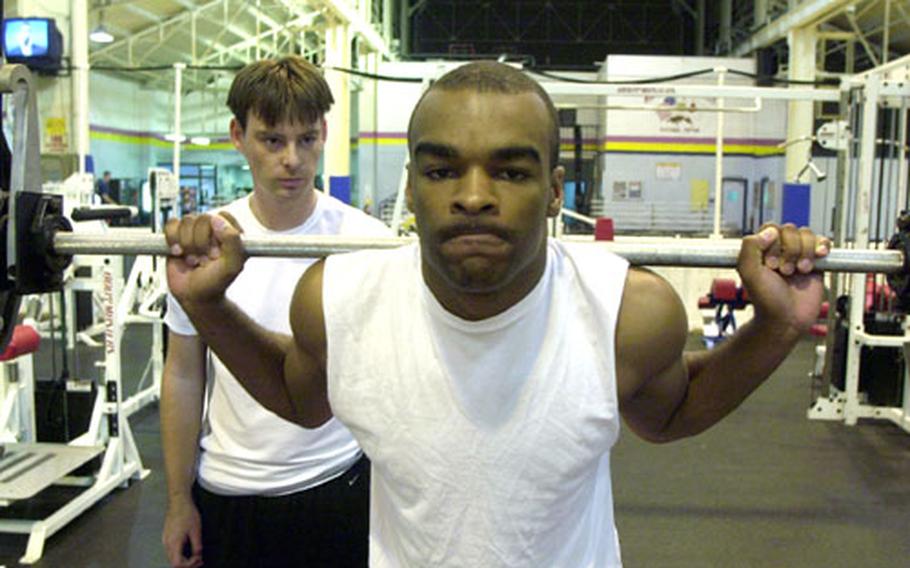 Seaman Tyson Huff does squats while working out Friday morning at the Fleet Gymnasium at Sasebo Naval Base as his colleague Petty Officer 2nd Class Joseph Juette spots him for safety. (Greg Tyler / S&S)

Each command decides when to hold PFAs, which must occur twice yearly, from four to eight months apart, said a Sasebo program coordinator.

&#8220;Still, though, I do have this problem with push-ups because of a congenital problem involving the cartilage in my shoulder. So, those push-ups are tough for me, but they take my physical condition of my shoulder into consideration.&#8221;

For many sailors, however, waistlines &#8220;somehow&#8221; have expanded appreciably since the last assessment; others&#8217; endurance levels have eroded to a hard wheeze after a 20-yard jog. For such servicemembers, PFA time can be difficult, if not dreaded.

According to Petty Officer 1st Class Joel Punsalan, Sasebo&#8217;s assistant PFA coordinator, now is not the time to try to attain something akin to decent fitness.

Failure or a probationary score means working out every morning for at least eight months in the mandatory Physical Enhancement Program coordinated by Punsalan and Chief Petty Officer Manuel Sapanlay, Sasebo&#8217;s PFA coordinator.

&#8220;The key to successes is to motivate yourself to work out three times a week. It also depends on your nutrition and your lifestyle all year round,&#8221; Punsalan said.

PFA dates always are announced at least 12 weeks in advance to give sailors time to fit the test into their schedules. &#8220;We have three different times,&#8221; Punsalan noted: &#8220;One early PFA, for those who know they are going to be on leave, &#8230; the regular PFA that should only be missed because of emergency leave and the make-up PFA, the last chance.&#8221;

Sailors arriving for Sasebo shore command duty less than 10 weeks ago need not take the PFA, but they must be weighed.

Starting in October 2002, the overall test scores were changed to an average of scores for several events, and age groups were segmented into five-year rather than 10-year increments.

Sailors&#8217; complaints sparked the changes. &#8220;We want people to look at the test as a motivator, not a demotivator,&#8221; said Capt. Tim Cepak, then deputy assistant commander of the Navy Personnel Command for Personal Readiness and Community Support.

The Navy also changed the requirement for command fitness coordinators &#8212; such as Sapanlay and Punsalan &#8212; who administer tests and serve as fitness mentors. They no longer must be chief petty officers or above; now, E-6s can be coordinators.

The PFA consists of curl-ups, push-ups, a sit-and-reach exercise and a 1.5-mile run or 500-yard swim. Scores for the four events are averaged to derive the overall score.

&#8220;It&#8217;s much better with the average because it encourages more people to look at overall fitness instead of just working on their weakest part of the test,&#8221; Punsalan said.

The base Physical Enhancement Program, or PEP, is &#8220;designed for everybody but mainly for people who failed and are medically cleared,&#8221; Punsalan explained, stressing that the program also is for those wanting extra training.

The program meets Monday through Friday mornings from 6:30 a.m. to 7:30 a.m. On Mondays, Wednesdays and Fridays the group does calisthenics and runs a minimum of 1.5 miles. Tuesdays and Thursdays, the group does other training, and has occasional classroom training on subjects such as nutrition and cholesterol.

Both command fitness coordinators, saying they&#8217;ve seen a greater emphasis on base toward healthy lifestyles and physical training, predicted the typical 5 percent failure rate will be lower this year.