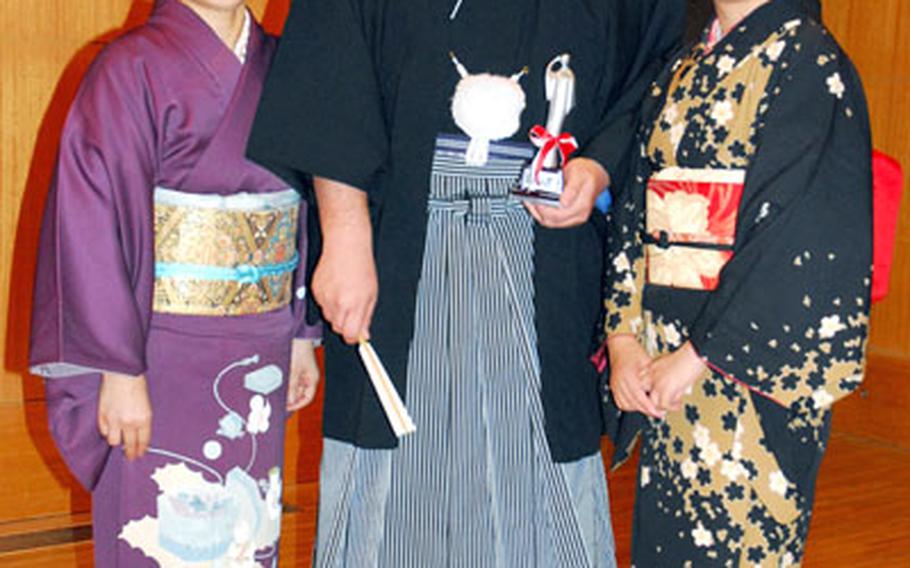 &#8220;I was the only one there from the military &#8212; most of the other foreigners there were teachers or college students,&#8221; the Sasebo Naval Base sailor said Wednesday, describing the &#8220;Gaikokujin&#8221; or &#8220;foreigner&#8221; category during last weekend&#8217;s Kyushu kimono competition. &#8220;They were joking, saying my military bearing was an advantage. I never imagined my military experience would help with wearing a kimono, but it did.&#8221;

Luna placed third in the competition&#8217;s foreigner category, in which contenders get points for how quickly they can tie an intricate traditional kimono while wearing it and how good they look when they&#8217;re done. His time was five minutes.

Luna said he entered the competition to spend time with his wife, who also participated, but he never expected to place, much less be invited to compete again in Tokyo in April.

The experience was far from Luna&#8217;s first foray into Japanese culture. The 24-year-old has lived in Japan for the duration of his Navy career &#8212; almost six years. He was &#8220;adopted&#8221; by a Japanese couple who taught him how to read and write Japanese. He studied Japanese history and politics at Sasebo&#8217;s branch of the University of Maryland University College-Asia once he was assigned shore duty, he said. Luna also takes karate lessons.

&#8220;I&#8217;ve always felt very connected to the Japanese society,&#8221; he said. &#8220;What I find most fascinating about Japan is that it keeps traditions alive somehow without conflicting with the growing and evolving world.&#8221;

Luna also attends festivals, visits temples and heads up the &#8220;adoption&#8221; of a local orphanage by his command, Sasebo&#8217;s Fleet and Industrial Supply Center. He has come a long way from when he first found out he was moving to the Asian nation, he said.

&#8220;My chief petty officer told me something that has always stuck with me: that our job is to be goodwill ambassadors. I guess I&#8217;ve always tried to live up to that.&#8221;