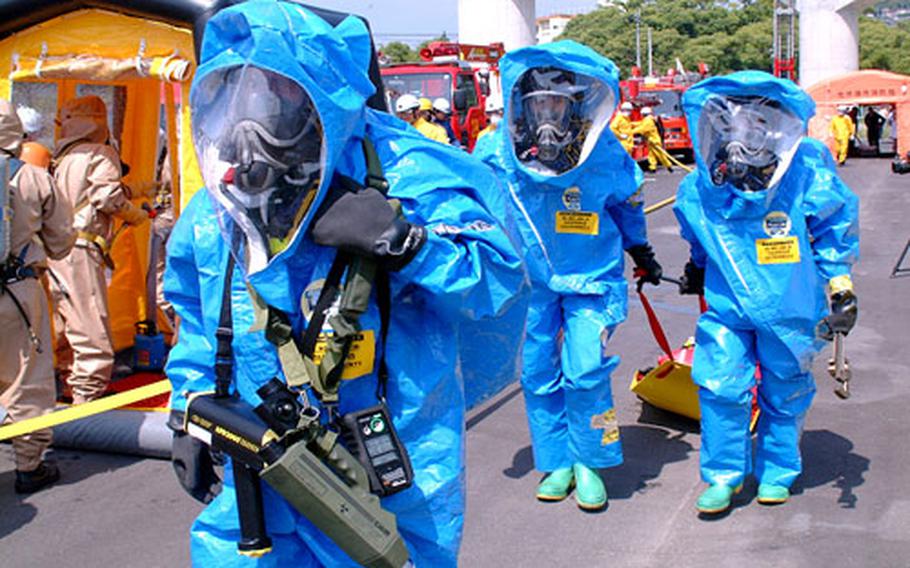 Hazardous Materials team members react during a HAZMAT spill drill at Sasebo Naval Base, Japan. Drills such as this are part of the Sasebo Safety Office program for safety, which helped earn the base the top safety award for all overseas Navy shore commands for 2005. (Masahiro Yano / Sasebo Safety Office)

Sasebo&#8217;s Safety Office recently earned the top Navy award for safety for overseas, non-industrial commands &#8212; The Secretary of the Navy Achievement in Safety Ashore for 2005. The office earned a similar award this winter from Commander, Naval Operations.

&#8220;So somebody in the Pentagon knows where Sasebo is now,&#8221; said Charles Carr, Sasebo safety inspector.

The Safety Office oversees all forms of safety across the base.

Much of what the office does focuses on workplace safety, including handling hazardous materials and working in confined spaces. For residents, the most visible safety program is driving and traffic safety.

From 2004 to 2005, Sasebo dropped its overall mishaps by 40 percent and the time lost to mishaps by 46 percent, the office reported. Government vehicle accidents dropped by more than half.

The office also implemented several new programs, including handing water out to drivers at the gates on holiday weekends to encourage sobriety; biannual safety fairs geared toward the season; and increased training and education.

They&#8217;ve created about 250 safety awards to give out. The prizes are simple &#8212; ball caps and T-shirts. But any contest helps raise awareness.