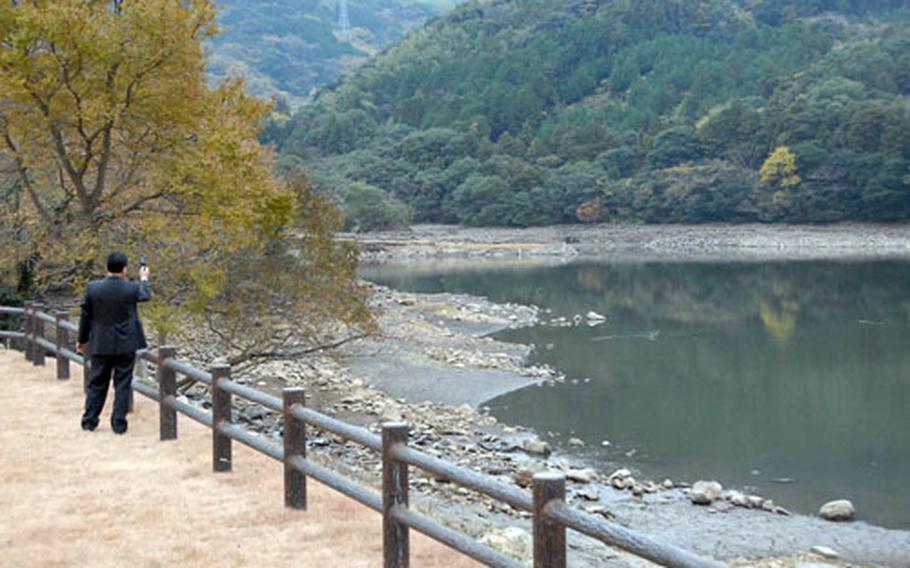 A man snaps a photograph of Sasebo city&#39;s most depleted reservoir, Yamanota, which was more than half empty Thursday. Sasebo Naval Base said it will begin rationing water on Dec. 17 to help conserve what is left of the city supply. (Photos by Travis J. Tritten / S&S)

A man snaps a photograph of Sasebo city&#39;s most depleted reservoir, Yamanota, which was more than half empty Thursday. Sasebo Naval Base said it will begin rationing water on Dec. 17 to help conserve what is left of the city supply. (Photos by Travis J. Tritten / S&S) The Navy Exchange car wash sits idle Thursday at Sasebo Naval Base. The base will begin rationing water to combat a drought that is threatening the Sasebo water supply. ()

Many base facilities will be without water for 18&#189; hours each day, though the Navy will not release a detailed plan until next week, said Lt. Cmdr. David Kang, base public works officer.

Also, public works is seeking approval on a purification system that will provide water to the Hario housing area and reduce the burden on the city&#8217;s supply.

Despite some rain over the past week, the city was still gripped by drought conditions, and the public water supply dwindled to a new low &#8212; just above 54 percent of capacity, the Sasebo water authority reported Thursday.

The base may begin producing its own temporary water supply to counter the drought.

Hario is about 25 minutes by vehicle from the main base and is home to many of the families stationed in Sasebo.

The purification system has not yet been approved but could be up and running in two weeks, Howard said.

Sasebo Naval Base is the city&#8217;s single largest consumer of water and has been pushing conservation in recent weeks.

&#8220;We believe that [the base] is showing understanding of our request&#8221; to cooperate with water conservation, said Sadayoshi Emoto, a water resource measurement official with the city&#8217;s waterworks bureau.

He said his bureau has received calls from the residents asking why the base was exempted from water rationing.

The Navy has said repeatedly it will assist the city in conserving water as long as changes don&#8217;t hamper the military&#8217;s mission.

The waterworks bureau officials met with base officials Monday and requested their cooperation again, officials said.

The base spent the past week formulating its plan to ration water.

Meanwhile, rainfall late Sunday and early Monday increased the water supply by 0.6 percent but was not enough to call off water rationing, which begins for about 100,000 households on Dec. 15, Emoto said.

The areas known as Yoshii, Sechibaru and Uku before city consolidation will not be affected by the rationing, he said.

The bureau had not settled on a rationing plan for affected areas but said it hopes to make a decision by Monday.

Flyers explaining the rationing plan and including basic English translation will be sent to area homes, the bureau said.