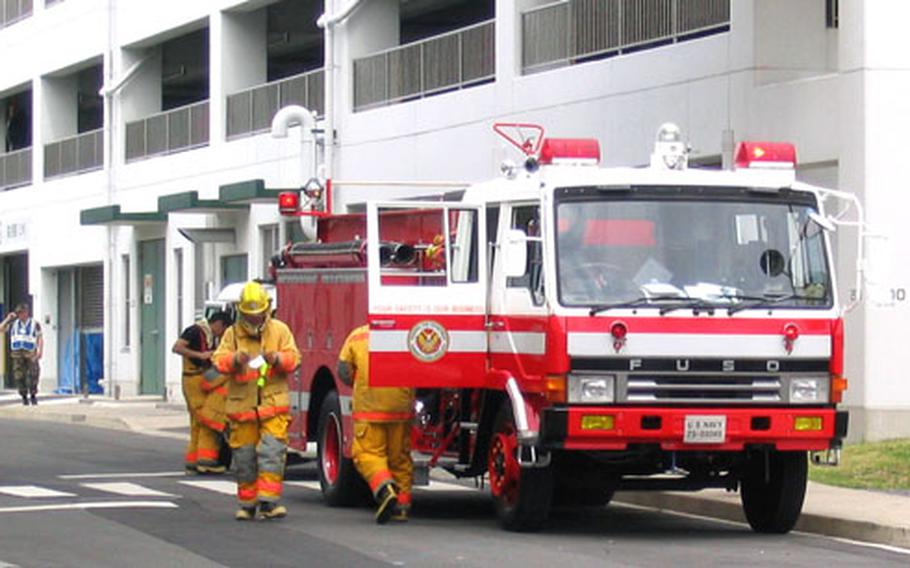 U.S. Naval Forces Japan, Regional Fire Department personnel at Sasebo Naval Base retrieve and load their gear after a simulated bomb explosion on a bus at the main base facility Friday morning. (Greg Tyler / S&S)

U.S. Naval Forces Japan, Regional Fire Department personnel at Sasebo Naval Base retrieve and load their gear after a simulated bomb explosion on a bus at the main base facility Friday morning. (Greg Tyler / S&S) 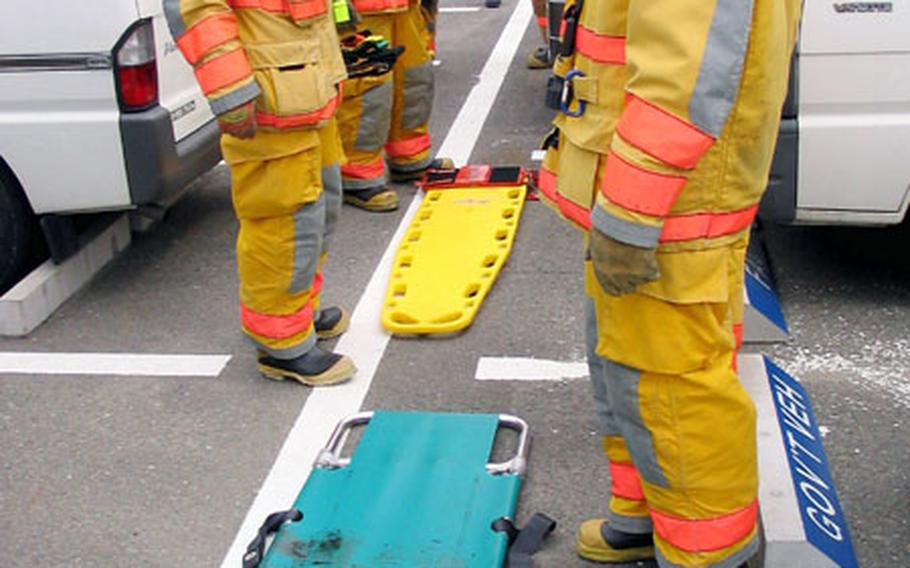 People &#8212; passengers on a bus blasted open by a bomb - in shock, feeling the pain. Some so obviously past feeling anything.

And because of the bomb, the base gates were locked: Ambulances from the nearby town, the usual resort for such emergencies, couldn&#8217;t get in.

Welcome to the Sasebo Navy Branch Medical Clinic&#8217;s annual mass casualty drill &#8212; a Friday morning exercise that brought to this naval base more than a very realistic depiction of the aftermath of terror. When the day was done, base residents had seen that their firefighters &#8212; a new component to Sasebo&#8217;s emergency response team &#8212; were trained, at speed and able to provide expert and faster-than-ever first-response medical care.

The firefighters were from the Sasebo detachment of the Commander, U.S. Naval Forces, Japan, Regional Fire Department &#8212; and they played a significant role.

Firefighters trained during the past year in basic emergency medical skills, said Chief of Training Guy Burleson. On April 1, they assumed the responsibility of first responders to medical emergencies on base. And Friday, they took part for the first time in the annual mass casualty drill.

With quicker response possible because fire stations are spread throughout base, the firefighters have trained to augment the medical clinic&#8217;s ambulance operations. When several persons are injured, firefighters utilize triage skills to assess injuries and prioritize treatment.

The clinic also sends ambulances and staff, who take charge of emergency medical care when they arrive, clinic officials said.

That&#8217;s the theory &#8212; but Friday provided clinic staff and firefighters their first opportunity to demonstrate they could put it into practice.

&#8220;It&#8217;s our first chance to work together in a stressful environment and exercise the skills learned in joint training for triage and first response,&#8221; Craig said.

Officials estimated about 50 persons from the clinic&#8217;s medical staff, 15 from dental, 20 firefighters, from 15 to 20 security personnel and 27 volunteers who portrayed the victims took part in the exercise.

Normally, when a clinic patient needs hospital care, medical staff transports him or her directly to a nearby Japanese hospital; the clinic lacks extensive emergency or trauma capabilities. But in the exercise scenario, Craig said, "because of the bus explosion, all the base&#39;s gates are closed, with no way in or out. So ... we had to stabilize and treat the victims here for a full hour because of the base gates being closed.

&#8220;Overall it was all very successful,&#8221; he said. &#8220;We had anticipated that the exercise would take at least two hours. However, everything was effectively accomplished in less than 90 minutes. It was smooth and orderly and the communication between fire and medical and other elements was great.&#8221;

Several officers from the Japan Self-Defense Forces attended. Navy Branch Medical Clinic Director Cmdr. Ron Dodge, who was at the triage area created just outside of the clinic&#8217;s emergency entrance, explained that the officers were interested in observing the fine details of mass casualty response efforts.

Asked about the interaction between medical and fire personnel, Craig said he could not recall any miscues.

&#8220;The fire department did well with their portion of the triage, which has to be done very quickly and decisively in a mass casualty situation,&#8221; he said.