Sasebo’s ‘HOG Heaven’ getting revved up this week 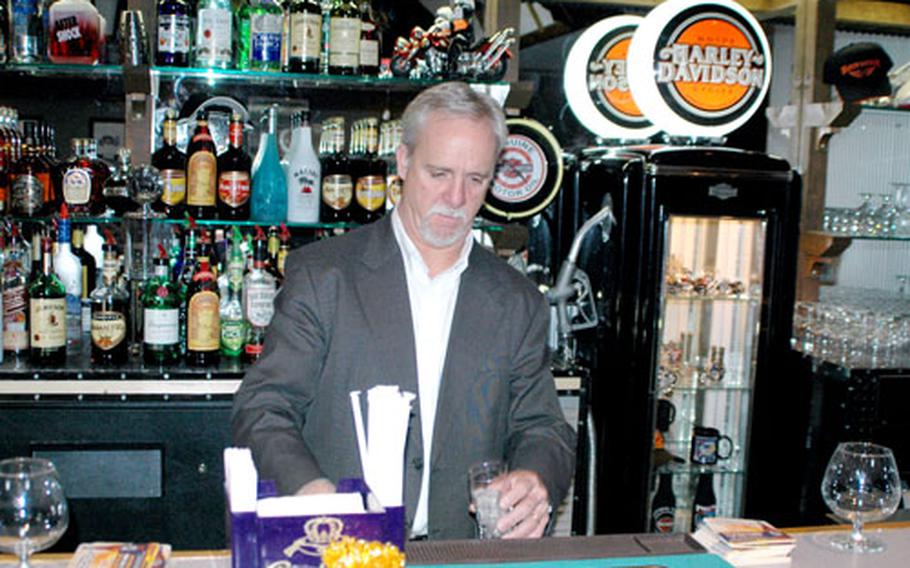 However, those who prefer four wheels or sailing the high seas are more than welcome, too, said the Harbor View Club&#8217;s manager, Kevin Dugan.

Dugan is responsible for renovating the all-ranks tavern using a Harley-Davidson Motorcycles theme to create HOG Heaven. The hope is that the renovated club will make a cross section of the community happy as pigs in corn beginning with the grand reopening at 5 p.m. Wednesday.

HOG Heaven refers to clubs known as Harley Owners Groups, with members who own the legendary motorcycles &#8212; as well as any other meaning one might attach.

The tables now have stools covered like leather motorcycle seats, bar stools with Harley- Davidson logos, an old-fashioned gas pump behind the bar and cabinets and drawers made to look metallic, like the inside of a garage.

Before the renovations, the tavern was a basic, bland, dark bar serving alcoholic beverages and featuring karaoke. Dugan didn&#8217;t like it.

&#8220;We wanted this place to be more like Chili&#8217;s and T.G.I. Friday&#8217;s in the United States. Now, those guys have nailed a concept,&#8221; he said. &#8220;We wanted to create an environment where people can come and entertain themselves by socializing, enjoying good food and alcoholic or non-alcoholic beverages.&#8221;

Dugan said the management did not want the tavern to become another &#8220;dingy, smoky place with shady characters in the corner&#8221; who come to get wasted.

The Harbor View Club has created a special menu for HOG Heaven: Every item can be eaten without using utensils, including various burgers and sandwiches, fries, chicken strips and shrimp.

Between now and Friday, patrons have an opportunity to vote to keep or reject karaoke. Dugan wants to see it go.