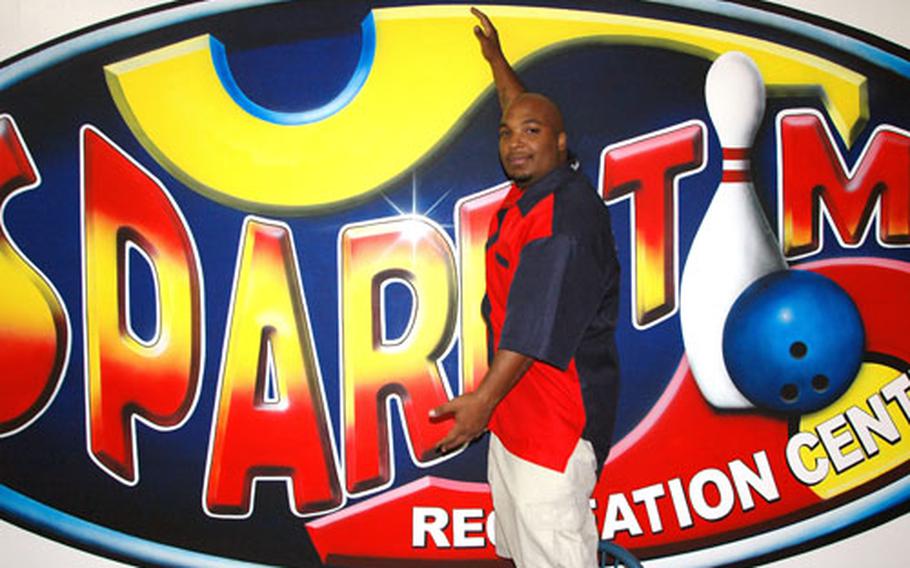 Keith Reynolds, manager of Sasebo Naval Base’s MWR Spare Time Recreation Center, stands on a chair Tuesday afternoon next to the facility’s new logo designed by Allison Foo, MWR marketing director. The huge piece of artwork was airbrushed on a wall alongside the bowling lanes during the current renovation period. (Greg Tyler / S&S)

SASEBO NAVAL BASE, Japan &#8212; A $500,000 make-over, including high-tech equipment upgrades and new decor, will be unveiled at the Morale, Welfare and Recreation department&#8217;s Spare Time Recreation Center soon after renovations are finished.

The facility closed Monday and will remain closed through Sept. 13 while the work is done, said manager Keith Reynolds.

All bowling lanes underwent gradual upgrades and the pin-setting gear was replaced in 2003, Reynolds said.

Recently, Cubica automation software &#8212; used to track games, number of players and scores &#8212; received upgrades. New bowling-area furniture, ball returns and ball racks, all made by the same company, will be installed before re-opening.

Reynolds said other improvements include:

New carpet and tiles throughout.All ceilings repaired and repainted.All new lighting fixtures.Additional special-effects lighting.New counter tops and furniture throughout.The snack bar also will be closed through the renovation, Reynolds said. At re-opening, it will sport a completely new, combined ordering, condiment and soda station. The seating will be entirely new, to include several spacious booths. A new wallpaper design will replace the current beige walls.

&#8220;The menu is changed too,&#8221; Reynolds said. &#8220;It was very heavy with about a dozen types of hamburgers. So, we determined which burgers were the most popular and kept those. Then we added several new sandwiches and salads.&#8221;

The slot-machine gaming center was moved into a secluded area and arcade games will have their own nook, to prevent game noise from spilling into the snack bar.

The bowling pro shop is stocked with new balls, from 6-pounders for youngsters to 16-pounders for adults, the manager said. New rental shoes, shoes for sale and retail bowling accessories were added recently.

The 24-Hour Fitness Center in the same building will not be affected by the closure, but the fitness center entrance from inside the bowling facility will be closed until the re-opening.