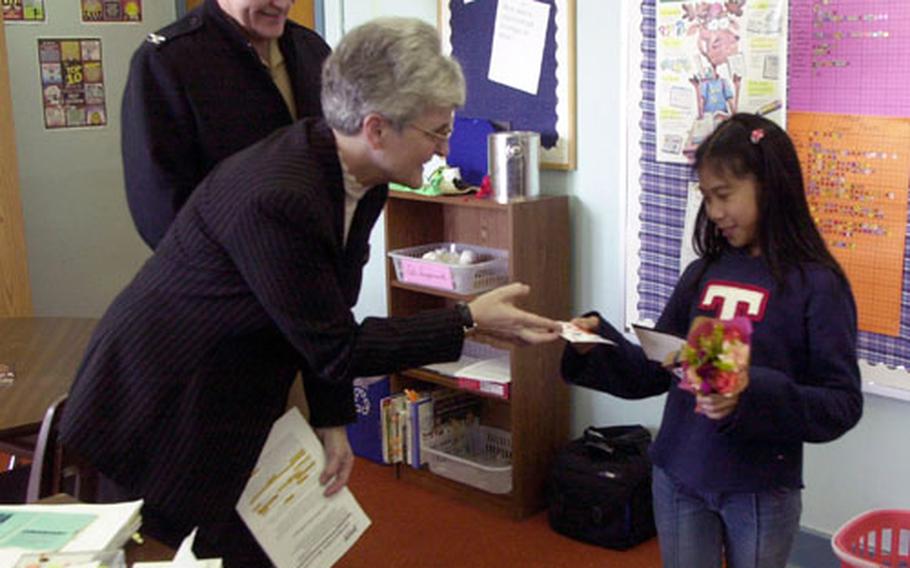 Leianne Jacob, 11, a 5th grade pupil at Sasebo Elementary School, received a $5,000 U.S. Savings Bond on Friday as a first place winner in the A-OK Program sponsored by the Navy Exchange Services Command. She was selected from thousands of entrants worldwide based on her academic effort in maintaining excellent grades during the 4th quarter of the 2002-2003 school year. (Greg Tyler / S&S)

SASEBO NAVAL BASE, Japan &#8212; Hard work paid off for a fifth-grader at Sasebo Elementary School.

Jacob was among thousands of students who entered the contest last year. She won the top prize based on her grades for the fourth quarter of the 2002-03 school year.

The A-OK Program recognizes pupils in military communities for earning good grades, according to Sandra Franklin, general manager of Sasebo&#8217;s NEX operations. To be eligible, pupils must maintain at least a &#8220;B&#8221; average and submit their verified grades to the local NEX.

A third-grader at Sasebo, Rendell Jacob, 9, transferred with his family to Coronado Naval Base, Calif.

At the present level, 16 pupils each year win an A-OK Program student award, certificate, lapel pin and a ribbon with medallion for academic excellence, Franklin said. &#8220;It&#8217;s good for the other kids to see the savings bond presented here in the classroom,&#8221; Franklin said. &#8220;It shows the rest of them that there are some real possibilities if they work hard and do well in school.&#8221;