Sasebo phasing in shore housing for E-3s and below Phase 1 of Sasebo’s Homeport Ashore program is a stopgap measure — using rollaway cots to give sailors a temporary home, three to a room. (Juliana Gittler / S&S)

Phase 1 of Sasebo’s Homeport Ashore program is a stopgap measure — using rollaway cots to give sailors a temporary home, three to a room. (Juliana Gittler / S&S) 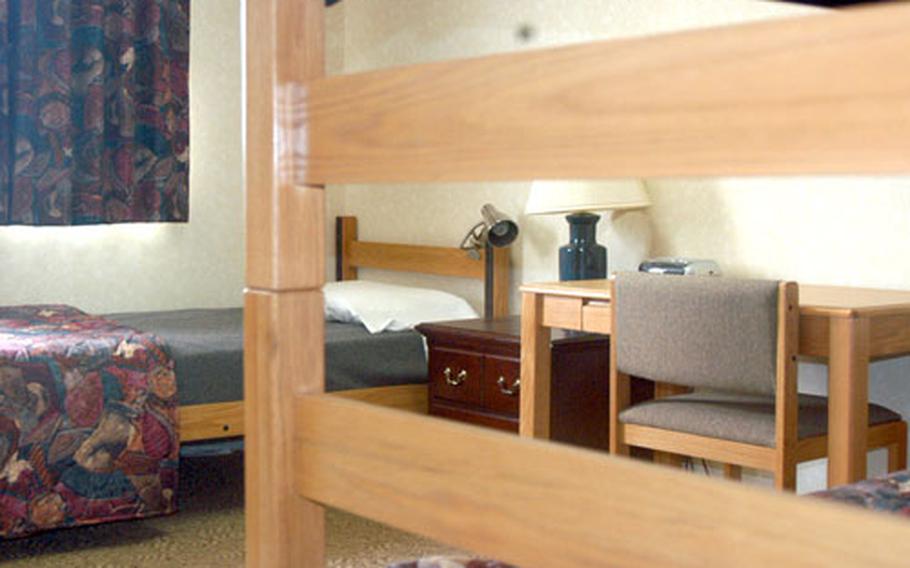 Phase 2 is a step up from cots. The furniture gives the room more space and a more permanent feel. (Juliana Gittler / S&S) In Phase 3, the goal for all of Sasebo’s junior sailors — a 1-by-1 configured room where two sailors share a bathroom and kitchen but have their own private, lockable bedrooms with closets — is realized. (Juliana Gittler / S&S)

For Sasebo, a small installation with half its population living off base, reaching the goal proved a bit of a challenge.

But with some creativity, rollaway cots and all the space they could find, Sasebo so far has found a home for about 180 of 280 sailors in need. More will get space once new furniture arrives.

It won&#8217;t be until 2015, with the construction of two planned buildings, that the base will meet its own goal: getting every single junior sailor a room to call his or her own.

That involved nudging out most of those eligible for off-base housing (E-5 and above) and digging up all the furniture they could find. Some of the rooms are using rollaway cots until real beds can be purchased.

The homeport ashore initiative was created to offer an essential quality-of-life need to young shipboard sailors. Rear Adm. James Kelly, commander of Naval Forces Japan, has made the program his top priority.

A new building that opened in 2004 went a step further. Every sailor in building 512 has the new 1-by-1 housing standard &#8212; two sailors share a communal kitchen and bathroom and each gets a small, private bedroom. That building now houses shore sailors and those assigned to the smaller ships.

Junior sailors from the larger ships will have the same configuration once the two new buildings go up.

But that&#8217;s nine years away. For now, existing rooms are used for the most part on a rotation, to give everyone a chance to live off the ship for a while. It&#8217;s a stopgap measure, Darnell acknowledged, but it gives some relief.

Another twist is the fate of the unfortunate E-4. In the States, that rank qualifies for off-base housing, but it&#8217;s not automatic overseas, Darnell said.

Sailors at that rank must prove themselves before they qualify. But the base hasn&#8217;t forgotten them: The future junior barracks also will house E-4s with less than four years of service, the population least likely to be granted off-base housing, Darnell said.

The next quarter&#8217;s budget, starting July 1, includes money to buy new furniture to outfit available rooms with beds and lockers, said Petty Officer 1st Class Ariel A. Santiago, the Combined Bachelor Housing officer who oversees all bachelor housing. That will replace the cots and add a few more spaces when current two-person rooms are reconfigured to house three.

The pressure for housing has a few side effects. Every E-5 and above in the future must live off base. And transient housing is a bit more scarce.