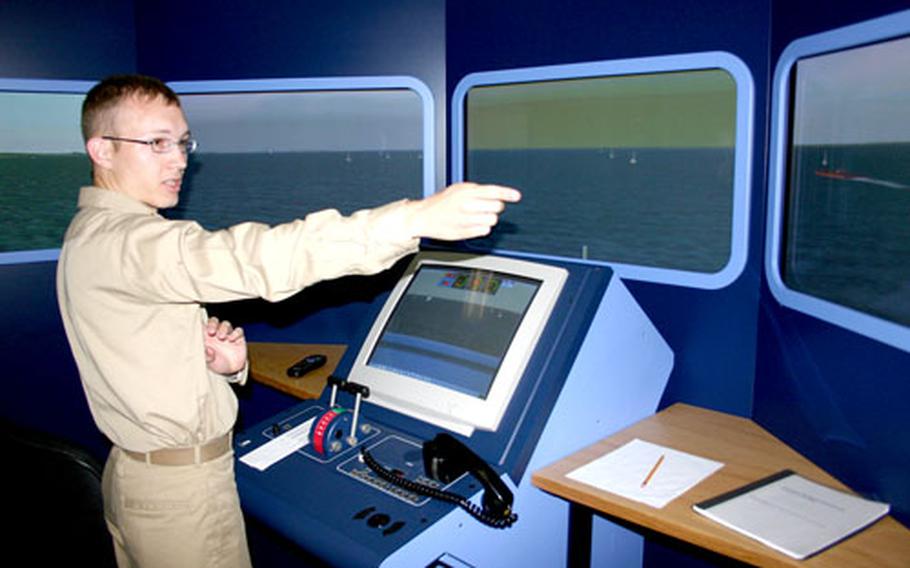 Ensign Ryan Michael from the USS Harpers Ferry points out another vessel that could be moving into his path Monday while standing at the lee helm (speed control) of Command Task Force 76’s Ship Navigation Simulator. (Greg Tyler / S&S)

Ensign Ryan Michael from the USS Harpers Ferry points out another vessel that could be moving into his path Monday while standing at the lee helm (speed control) of Command Task Force 76’s Ship Navigation Simulator. (Greg Tyler / S&S) 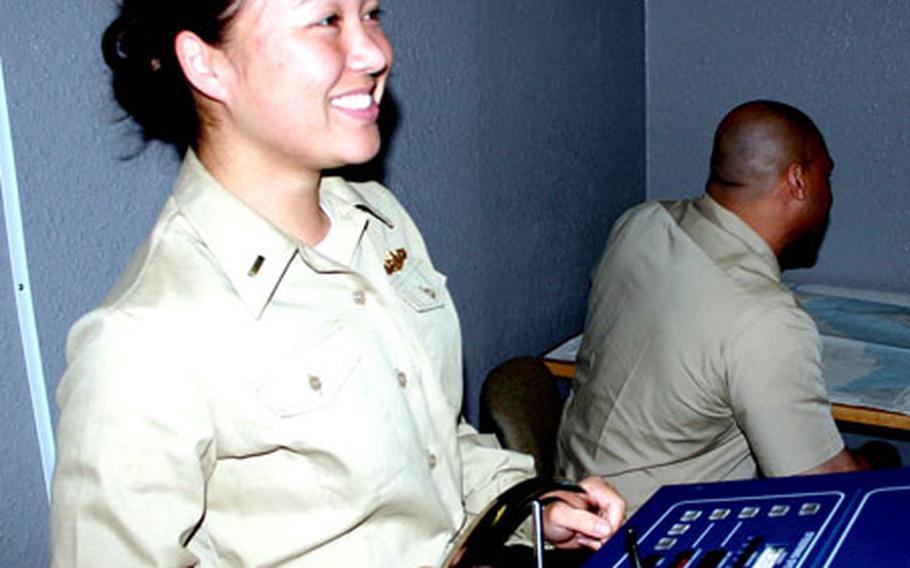 SASEBO NAVAL BASE, Japan &#8212; Walking into Command Task Force 76&#8217;s Ship Navigation Simulator is like visiting an electronics department store with rows of large-screen televisions all showing the same movie.

It&#8217;s a film with an ocean setting, where other ships get in your way, making it harder to reach barely visible land.

&#8220;It is great to be able to get this type of experience &#8230; real-world problems enter the scenario,&#8221; said Ensign Scott Huchton, one of five junior officers from the USS Harpers Ferry training Monday.

&#8220;It can get a little stressful in there, but the simulator is so much better than looking at pictures or slides, sitting in class or reading books.&#8221;

Chief Petty Officer James Clayton, seasoned with 19 years in the Navy and currently Harpers Ferry assistant navigator, led the training. Throughout the simulation, he kept a close watch as trainees maneuvered a simulated amphibious dock-landing ship from open sea to a berthing slot at a graphic replica of Yokosuka Naval Base, Japan.

Lt. j.g. Aaron Bergman, navigation officer on the USS Juneau, was the Wizard of Oz character in Monday&#8217;s training. Unseen in the next room, he used another computer to &#8220;manipulate navigational factors. I can control traffic by the other vessels, the draft (water depth), weather, the time of day, even sea conditions,&#8221; Bergman said.

Clayton said that as far as he knows, CTF76 has the only simulator in the Pacific. The system costs more than $60,000 but the realism it provides, he added, is invaluable.

The officer of the deck verbally communicates via radio to other &#8220;vessels,&#8221; making certain that navigational intentions are clear. On the other end of the radio is Juneau&#8217;s Bergman, clicking a mouse in the next room to control the scenario.

It builds confidence, he said, when &#8220;using a simulator that&#8217;s kind of like a big video game.&#8221; There he gets the rare opportunity to master navigation skills while &#8220;not having to worry about actually putting anyone in real danger.&#8221;