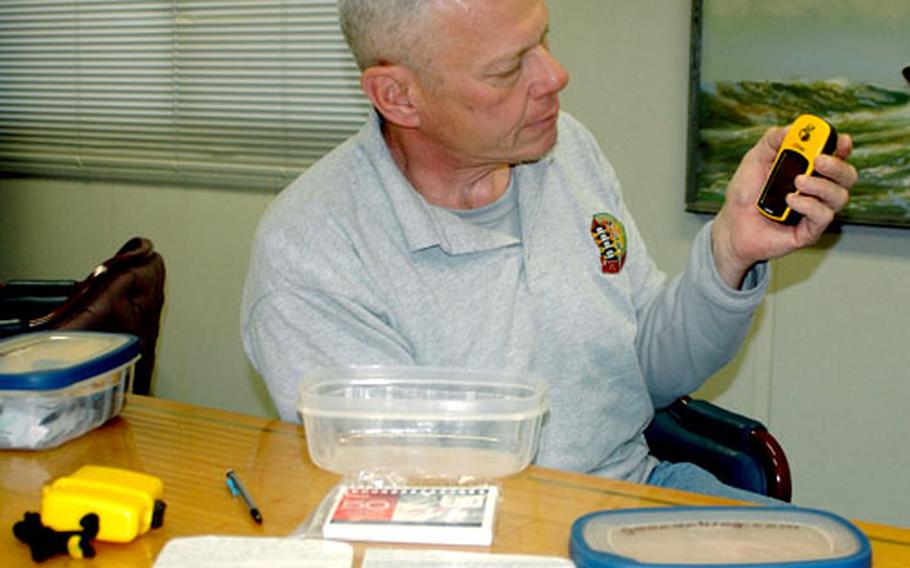 Walter Birkenheier, Sasebo Naval Base’s Sailing and Outdoor Recreation Center manager, displays the contents of a cache like the nine he’s already placed in locations around Kyushu. The boxes contain a logbook, pencil, key chain and stash notes inside. When geocache players find the cache, they register in the logbook, leave a note, add to the cache and replace it for another player to find using a GPS device, such as the one Birkenheier is holding. (Greg Tyler / S&S)

SASEBO NAVAL BASE, Japan &#8212; A workshop here will provide instructions for geocaching, a growing high-tech activity in which participants use Global Positioning System units to track down a box filled with little treasures.

The activity has several variations, but in general a geocacher, armed with a GPS unit, uses coordinates given on a Web site or by word of mouth to find a container (the &#8220;cache&#8221;). The cache typically is a weatherproof box containing a logbook and pencil, and sometimes also messages and other basic nonperishable items. Once a cache is found, the visitor is asked to update the logbook and perhaps add a message or a new item.

On Thursday afternoon, the Web site, www.geocaching.com, listed more than 400 caches waiting to be found in Japan.