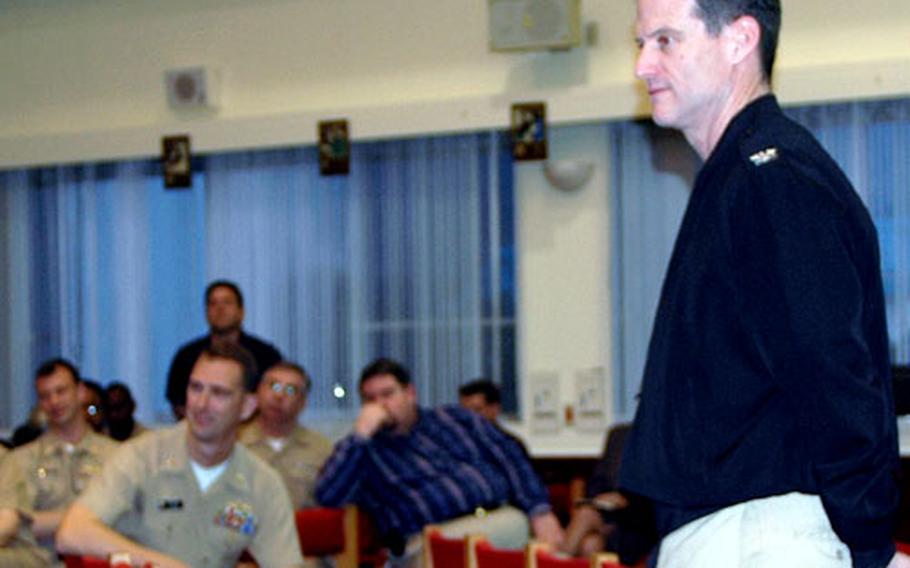 Capt. Tilghman Payne, commander of the southern Japan base, and Command Master Chief Petty Officer Marc Sibal led the meeting, one of the base&#8217;s periodic gatherings for feedback and suggestions.

Kolosik said appointments for follow-up visits in two weeks to a month from the date of an initial appointment should be scheduled the same day as the first visit. Don&#8217;t wait two weeks or more to schedule the follow-up appointment only to learn there are no open slots for the next week or 10 days, Kolosik said.

Another resident asked the clinic commander about the availability of a pediatrician in Sasebo.

Unique cases with specialized requirements could be transported to Yokosuka Naval Hospital, she added.

A Navy spouse living in Hario asked why there was not a coffee house or cafe setting at the housing village. She praised Seattle&#8217;s Best and Wolfgang Puck&#8217;s on the main base and said a similar location was needed at Hario.

Sandra Franklin, Sasebo Navy Exchange general manager, and Scott Poluhowich, Morale, Welfare and Recreation director, said that past indicators did not show such a place would have attractive enough economic potential but agreed to look at alternative ways to provide some sort of relaxing coffee spot.

One NEX shopper told Franklin that she&#8217;d noticed some clothing not allowed in the Navy&#8217;s clothing policy was on sale at the store.

Franklin said NEX buyers operate on a worldwide basis, buying what they believe is best suited to stores on Navy bases in the United States and overseas.

&#8220;That process begins months in advance, and I don&#8217;t think they were aware of certain sensitivities to the dress code we have here in Japan,&#8221; Franklin said.

&#8220;But we are pulling those items now and trying to rectify the situation through buyers,&#8221; she added.