Sasebo JROTC geared up and ready to roll 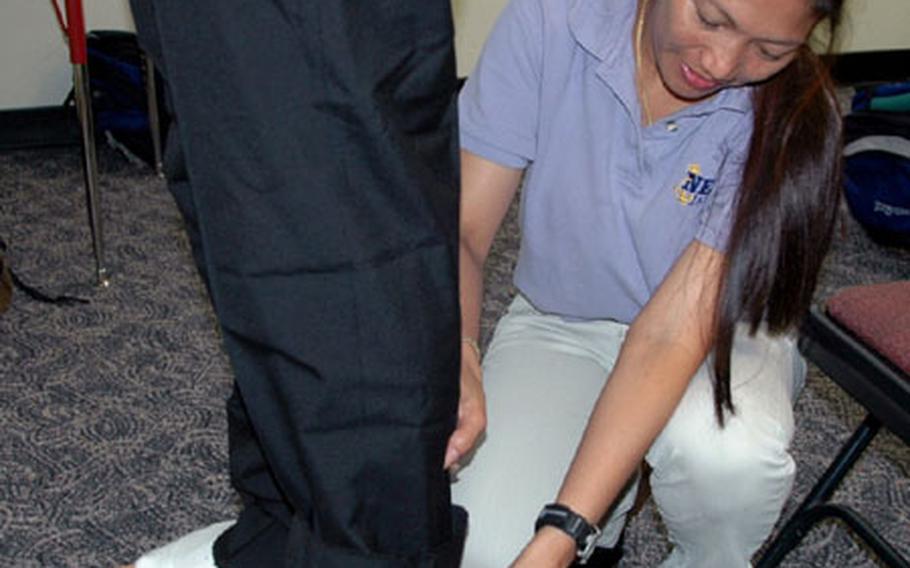 Juvy Moreau from the Navy Exchange Tailor Shop at Sasebo Naval Base, measured many, many hems on Thursday as Navy Junior Reserve Officer Training Corps cadets were fitted for their uniforms at Ernest J. King High School. (Greg Tyler / S&S)

The high school has 303 students, according to the registrar. Seventy-five are in JROTC, said cadet leaders and the unit director, retired U.S. Coast Guard Cmdr. Tom Heitstuman, during uniform issue day Thursday.

Only two years ago there was no E.J. King JROTC.

&#8220;We are not recruiters. Now we do have a lot of information about the military on both the enlisted and officers&#8217; side, and we&#8217;re happy to present that if a cadet shows an inclination and interest in a military-type career. But our primary concern is helping to create solid citizens,&#8221; Heitstuman said.

&#8220;As long as they are successful in college, in the business world, in academia, whatever they do, the kind of skills we teach helps them develop values, honor, leadership and other qualities that add value to life.

&#8220;We want them to be solid citizens whether they enter the military or not,&#8221; Heitstuman added.

Cadet Ensign Kristen Brown, a senior and daughter of Chief Petty Officer Christopher Brown of the USS Essex and local English teacher Diane Brown, is the JROTC public affairs officer this year. She also wants a career in the same field in the Navy, and has applied for Navy and Air Force scholarships.

&#8220;I once shadowed a woman in government public affairs &#8230; and she worked a lot with the military trying to get civilians involved. My thing is that I find a lot of people just don&#8217;t see what all the military does. So, instead of arguing about it, I actually want to show them,&#8221; Brown said.

Brown said there are more female students in JROTC than last year, and more female officers in cadet leadership.

&#8220;And a lot of the girls who are taking it are already assertive. They are girls who are varied, do well in school and excel in everything. The program is basically a leadership program, and they probably see it as a way they can show what they have,&#8221; Brown added.

Cadet Lt. Cmdr. Mark Bote is the commanding officer of E.J. King&#8217;s JROTC unit this year. The son of Petty Officer 1st Class Luisito and Marie Bote said his father advised taking the officers&#8217; path if he wanted to join the Navy. He hopes to attend the U.S. Naval Academy.

&#8220;I want to go into JAG (Judge Advocate General&#8217;s Corps). But first, I want to earn my degree in political science because I&#8217;ve been advised that is a good degree to have before going into law school. I&#8217;m really interested in political science and politics,&#8221; Bote said.

&#8220;This program is only in its third year, so nobody really knew much about ROTC programs and all the scholarships that help you get into the service as an officer instead of enlisted. Nowadays, many of our fathers went in the enlisted path, and they say it&#8217;s better to go in as an officer. When you get out, you have a skill, a profession.&#8221;