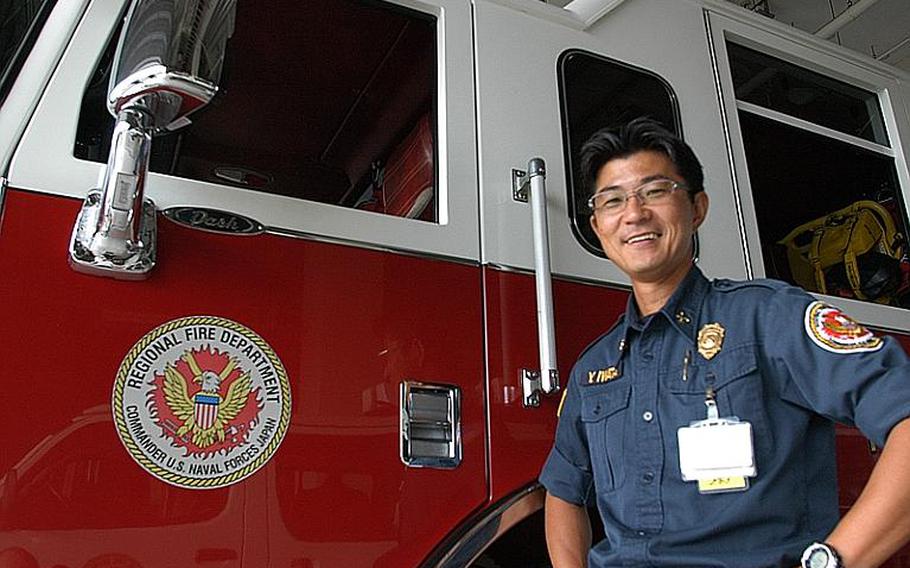 Buy Photo
Japanese national and fire department drillmaster Yujiro Iwata, 43, has been credited with saving lives for training Sasebo Naval Base&#39;s 155 man department. Iwata is a two-time Navy Fire Service Instructor of the Year, and current 2011 Department of Defense Instructor of the Year. He was honored at a stateside ceremony late last month. (Matt Burke/Stars and Stripes)

According to the Department of Defense and his co-workers, the 16-year department veteran is a real-life superhero.

Not only has the Japanese national been credited with saving lives at the small U.S. Navy base in southwestern Japan, but he also was recently named Department of Defense Firefighting Instructor of the Year.

The 43-year-old married father of four doesn&rsquo;t like to talk about awards; he deflects all recognition to the 155 mostly Japanese civilian firefighters at the department that he has trained and the chiefs who nominated him.

&ldquo;I feel honored, but I don&rsquo;t consider myself to be the best,&rdquo; Iwata said Tuesday. &ldquo;I try not to talk about it. The award is not really for me. I was just representing these [firefighters].&rdquo;

After Iwata&rsquo;s former crew brought back to life a civilian base employee who had a heart attack last year, they credited him with giving them the tools needed to save the woman&rsquo;s life, a feat that helped him win his second Navy Fire Service Instructor of the Year and put him in contention for the DOD award.

&ldquo;It&rsquo;s all the hard work they do,&rdquo; he said. &ldquo;I need good students. If there are no students, I can&rsquo;t teach&hellip; It was nice of them to say. It made me feel good.&rdquo;

This even-keeled temperament, professionalism, and humble nature don&rsquo;t come as a surprise to the department&rsquo;s administration.

&ldquo;He always puts service before self and excellence in all that he does,&rdquo; said Assistant Fire Chief for Prevention Moses Gibbs III. &ldquo;He&rsquo;s a top notch first-responder. He continues to ensure that all fire and emergency services are in a constant state of readiness, ready to battle and mitigate any emergency situation.&rdquo;

Iwata grew up near Sasebo on Hirado Island. He traveled to the U.S. for college, where he honed his English speaking, eventually earning a degree in management studies from the University of Maryland.

He didn&rsquo;t always dream of becoming a firefighter. He worked for Japanese television while in the U.S. in hopes of breaking into the film industry but the dream had to be jettisoned as it was too expensive to pursue, he said. The karate enthusiast also tried being a stuntman while in Tokyo many years ago. That, too, didn&rsquo;t pan out.

He applied for the fire fighting job at Sasebo Naval Base because he was in good shape and spoke English, he said. It was there he found saving lives to be his calling and an immense sense of pride by serving those who rushed to the aid of his people following the March 11 earthquake and tsunami.

&ldquo;That made me feel good about working for the U.S. military,&rdquo; he said. &ldquo;We support the people who assisted.&rdquo;