Sasebo is spared the worst of Typhoon Songda's punch 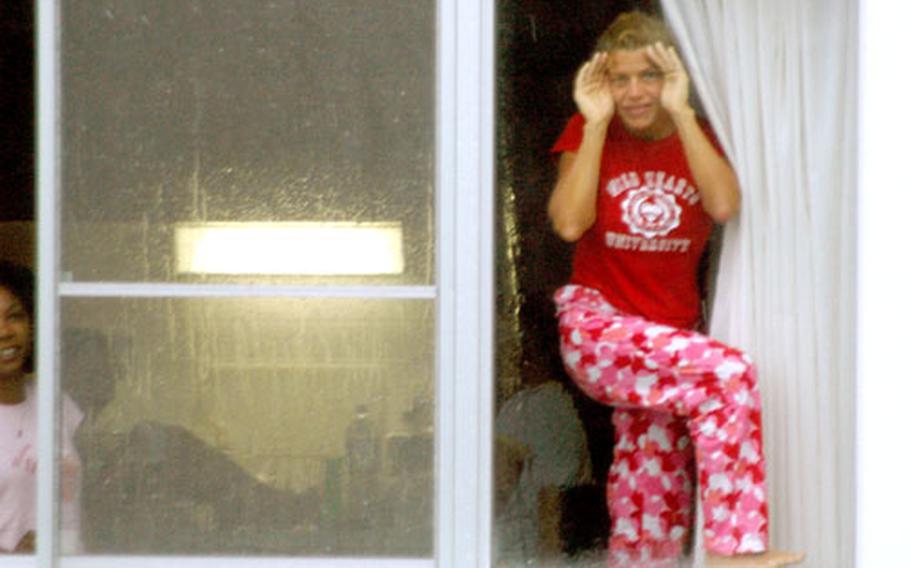 Some Sasebo personnel living off base in older homes were extended an invitation from commander Capt. Michael James to stay on base in bachelor housing. As Typhoon Songda was heavily huffing and puffing Tuesday morning, this young woman stood in a BOH window, trying to get a good look at the wild weather. (Greg Tyler / S&S)

Some Sasebo personnel living off base in older homes were extended an invitation from commander Capt. Michael James to stay on base in bachelor housing. As Typhoon Songda was heavily huffing and puffing Tuesday morning, this young woman stood in a BOH window, trying to get a good look at the wild weather. (Greg Tyler / S&S) 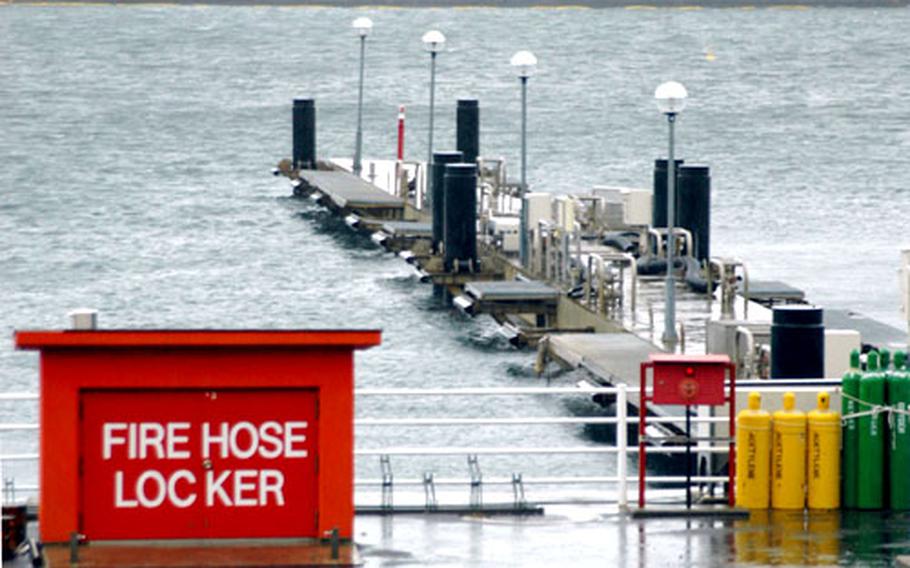 Normally the home of the four Landing Craft Utilities belonging to Assualt Craft Unit One, Sasebo Detachment, the ACU-1 Juliet Basin pier was empty Tuesday as the winds swirled around. (Greg Tyler / S&S) 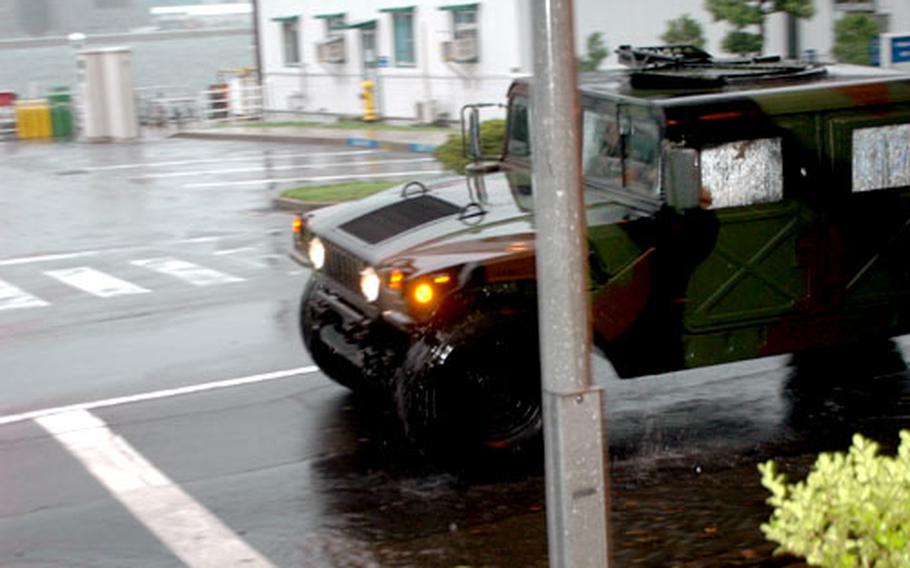 The only vehicles moving on Sasebo Naval Base Tuesday were those operated by the Security Department. The base was closed to all but mission essential personnel. (Greg Tyler / S&S)

There were no reports of damage or injuries on the Kanto Plain, which received just .10 inches of rainfall, Branham said, while the highest reported wind gust was 55 mph at Haneda Airport.

Songda passed through the Kanto Plain rapidly early Wednesday, moving northwest of the region at a 45 mph clip.

Military forecasters were predicting a very hot, sunny day on the Kanto Plain on Wednesday, with highs approaching the mid-90s.

Songda was the fifth typhoon to threaten the Kanto Plain this year, Branham said.

Base spokesman Capt. Stewart Upton said he would release no information about possible damages or injuries on the base until Wednesday.

The typhoon pounded Japan&#8217;s southern main island of Kyushu with heavy rains and strong winds Tuesday, forcing thousands to evacuate their homes and knocking out power to over a million households, the Associated Press reported.

Across Japan, 580 people were injured and eight people were killed, Japanese media reported, although police confirmed only three deaths.

Rescuers were searching for the 22 crew members of an Indonesian cargo ship that ran aground and was flooded. Police and coast guard were also investigating reports that stormy seas sank a Cambodia-registered freighter carrying 18 Russian crew in western Hatsukaichi harbor. Two died and three still were missing, a Hiroshima Coast Guard Bureau spokesman said on condition of anonymity.

The Associated Press also reported a 62-year-old man was buried in a mudslide in southern Kogoshima prefecture. He was rescued and taken to a hospital, but he later died, a local police spokesman said.

Air and train travel was canceled over much of the affected area and some expressways were closed, transportation officials reported Tuesday.

The most severe damages reported on Okinawa, however, were scattered power outages, downed tree limbs and some broken glass.

Sasebo Naval Base in southern Japan also escaped the potential storm damage Songda was predicted to inflict Tuesday morning. The highest sustained winds on base reached just 40 mph and the strongest gust just 63 mph at 9:27 a.m., although Nagasaki City, about 50 miles southeast of Sasebo, had maximum wind gusts of 94 miles per hour around 9 a.m.

Sasebo issued the TCCOR All-Clear around 3:15 p.m., although a small-craft warning remained in effect into the early evening.

A survey of Sasebo base facilities revealed no major structural damages; officials reported no injuries to base personnel.

Elsewhere in the area, Songda appeared to inconvenience more than damage. Hideki Ikematsu, spokesman for the Crisis Management and Disaster Prevention Department of the Nagasaki Prefectural government, said, &#8220;A total of 3,022 people (1,969 families) in Nagasaki, Hirado and Goto Island voluntarily evacuated.&#8221; He said six people in the prefecture received injuries during the typhoon.

The spokesman said 82,800 households in Nagasaki Prefecture lost power during Typhoon Songda &#8220;but there was no report of any flooding or damages to the public roads.&#8221;

Major expressways in Kyushu and the Chugoku districts closed, and the typhoon forced the cancellation of at least 448 flights in Kyushu and Chugoku, according to a Japanese news report.

Radar showed that Typhoon Songda made landfall at approximately 9:40 a.m., 23 miles to the south of the Sasebo base. Radar also showed Typhoon Songda continued to make jogs to the east as it moved north-northeast at 17 mph.

As he did last week when Typhoon Chaba approached, base commander Capt. Michael James made rooms available in bachelor housing to those living off base who did not feel safe in their own housing.

Chiyomi Sumida and Nancy Montgomery contributed to this report.