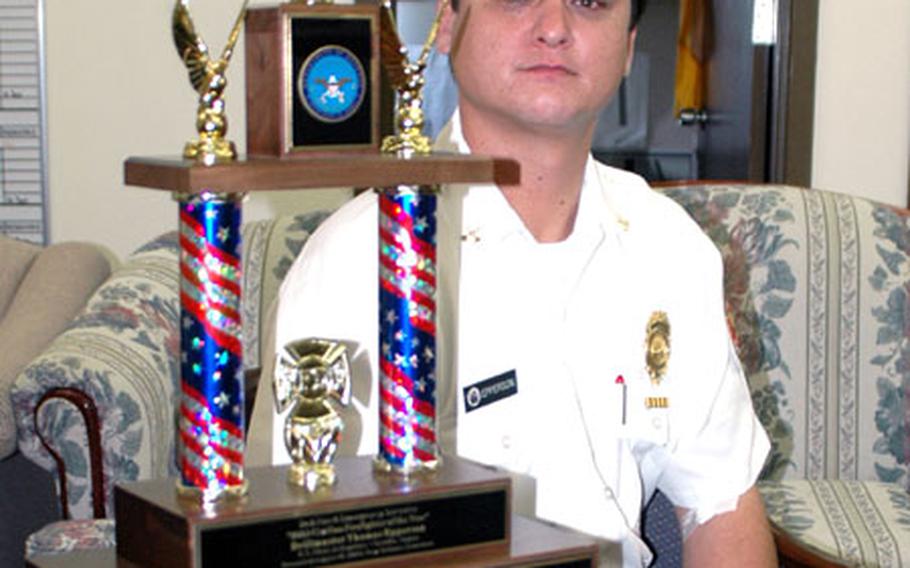 Officer Thomas Epperson, drillmaster of Sasebo Naval Base&#39;s Command U.S. Naval Forces Japan Regional Fire Department, won the U.S. Navy&#39;s Civilian Firefighter of the Year award in July. On Aug. 18, while in New Orleans to receive the Navy award, the surprised Epperson as also named the Department of Defense Civilian Firefighter of the Year from among the estimated 13,000 employed by DOD. Epperson is shown at the Sasebo office with his trophy. (Greg Tyler / S&S)

SASEBO NAVAL BASE, Japan &#8212; Thomas Epperson says that as he attended firefighter training at Yokosuka Naval Base off and on the past few years, it never occurred to him he&#8217;d one day be an instructor instead of a student.

Assistant Fire Chief and Drillmaster Epperson, five years into his firefighting career, recently was named Department of Defense Civilian Firefighter of the Year, for being not only an instructor but a good instructor.

He trained 47 Japanese recruit firefighters in Sasebo for the local department, incorporating live-fire training with no mishaps or injuries.

In addition, officials said, the Long Beach, Calif., native saved the Navy thousands of dollars by conducting the training here, rather than sending firefighters to expensive civilian firefighting academies.

&#8220;When the fire departments regionalized, we needed to man our stations,&#8221; said the 33-year-old drillmaster. &#8220;So we picked up 47 firefighters, and they had to be trained. They had to learn to ride and use any of the apparatus and respond to any emergencies.&#8221;

Another option would have been to send recruits through training with Sasebo City, &#8220;but their standards are not the same as American standards in training,&#8221; said Sasebo Commander Naval Forces Japan Regional Fire Department Chief Scott Rhode.

&#8220;We could operate our own academy or send them up to Yokosuka. We&#8217;d sent him (Epperson) up there on other occasions to learn the training from the instructors&#8217; point of view, so we decided to have the academy right here.

When he arrived in New Orleans for the DOD Fire and Emergency Services Award Banquet on Aug. 18, Epperson knew that he&#8217;d won the award as the U.S. Navy&#8217;s Civilian Firefighter of the Year for 2003. He attended knowing what to expect &#8212; or so he thought.

His name was announced, as expected. He stepped forward to receive the award, as expected. But after Epperson accepted the Navy award, presenters asked him to remain in front of his colleagues while the DOD Civilian Firefighter of Year winner was announced.

The Fire and Emergency Services awards program recognizes individuals, teams and departments making significant contributions to fire and emergency services. The award banquet honored DOD&#8217;s best among about 13,000 firefighters from nominating departments across all military services.

Epperson&#8217;s selection, Rhode said, &#8220;means recognition of the department as a whole. &#8230; This award demonstrates the reality that Sasebo firefighters are trained to a very high standard and in fact, they exceed the standards of those departments against which we competed.&#8221;

&#8220;Thomas represents the CNFJ Regional Fire Department with honor, courage and a commitment to excellence,&#8221; Burleson said. &#8220;His dedication to the fire service&#8217;s life-saving mission is a credit to all who serve and risk their lives daily.&#8221;

Another Navy-connected firefighter in Japan took the DOD Heroism of the Year Award for 2003.

Akihito Sato, assigned to Commander U.S. Naval Forces Japan in Yokosuka, received the DOD award for saving the lives of two people in a burning building.

Sato noticed a column of smoke while driving to work July 12, 2003, DOD officials said. Despite heavy fire and smoke, he rescued the two, who were &#8220;in severe distress,&#8221; officials said.

&#8220;We are excited for the awardees, and are proud of the example they set,&#8221; William Killen, director, Navy Fire and Emergency Services, stated in a Navy report. &#8220;They exemplify the efficiency and effectiveness of the Navy fire and emergency service.&#8221;

A five-person selection board, appointed by the International Association of Fire Chiefs executive director, chose the award recipients.