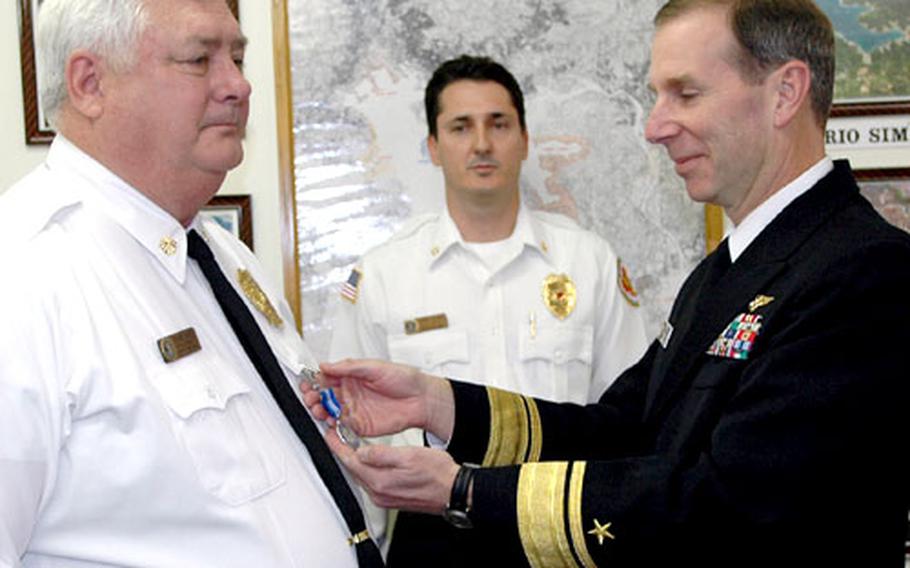 SASEBO NAVAL BASE, Japan &#8212; Richard S. Rhode, known to many here simply as &#8220;chief,&#8221; as in fire chief, received a commendation from the Navy at a ceremony Wednesday in which a special medal was pinned to his uniform by Rear Adm. Frederic R. Ruehe, commander of U.S. Naval Forces Japan and the fire chief&#8217;s de facto boss.

Doran could not be at Wednesday afternoon&#8217;s ceremony in the administration offices of the CNFJ Regional Fire Department, Sasebo Division. But the event was attended by base commander Capt. Michael James, Sasebo&#8217;s Chief Staff Officer Cmdr. Bernard Wang, firefighters from the department and other well-wishers.

&#8220;I had heard something vague about maybe being nominated for this but that was more than a year ago; I never really gave it another thought,&#8221; Rhode said after Ruehe made it official with a hearty handshake.

Rhode, 55, admitted being slightly uneasy Wednesday. &#8220;I&#8217;m always happy when I&#8217;m seeing others receive recognition like this, especially when I&#8217;ve helped make the award possible. &#8230; But I&#8217;m a little uncomfortable finally being the one standing here today,&#8221; said the fire chief, who leaves Sasebo for a similar position at Pearl Harbor, Hawaii, in April.

A former U.S. Marine and soldier, Rhode, wife Cheryl and their three children have lived in Sasebo for more than five years.

In Doran&#8217;s narrative explaining Rhode&#8217;s selection for the award, he highlighted several accomplishments by Sasebo&#8217;s CNFJ Regional Fire Department on Rhode&#8217;s watch, including:

Sasebo&#8217;s completion of the Navy&#8217;s pilot Weapons of Mass Destruction program conducted by the Soldier, Biological and Chemical Command.Infrastructure improvements via a facility modernization program that included designing and building six new strategically located base fire stations.CNFJ Regional Fire Department earning recognition as Navy Fire Department of the Year for 2003.Rhode also was commended for some personal achievements on the job:

He implemented the International and Department of Defense Firefighter Certification Program.He coordinated U.S. efforts to fight a massive fire in northern Japan that began following a powerful earthquake.&#8220;Mr. Rhode&#8217;s actions reflected great credit upon himself and the U.S. Navy and have directly enhanced the relationship with the Japanese government,&#8221; Doran stated in the commendation narrative.

Rhode had not prepared a speech to follow Ruehe&#8217;s presentation of the medal but told the gathering, &#8220;It is the absolute truth that this event today would not be happening were it not for the performance of everyone in this room right now.&#8221;