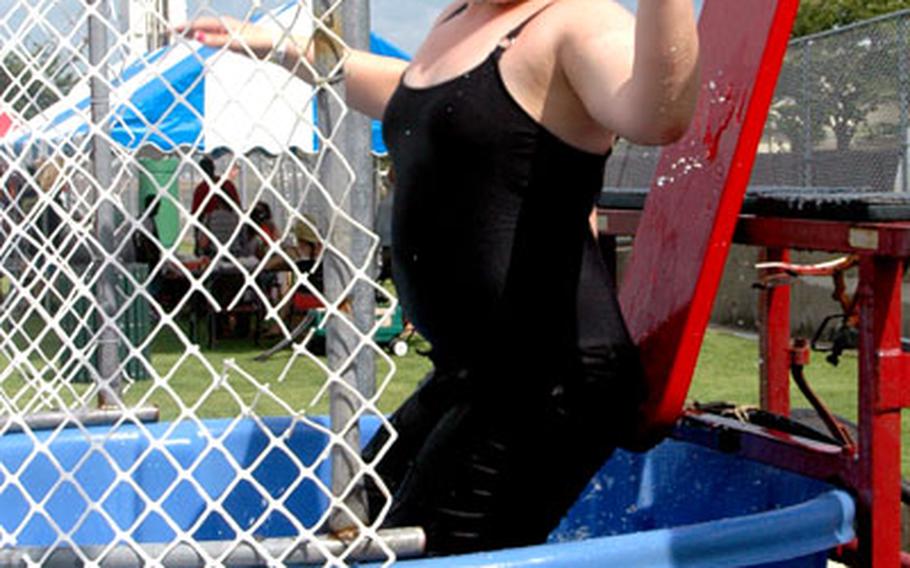 Volunteer Katie Kremer is falls into the water in the dunking booth, one of the activityiesat the 2005 National KidsDay celebration at Sasebo Naval Base, Japan, on Saturday. (Greg Tyler / S&S)

Volunteer Katie Kremer is falls into the water in the dunking booth, one of the activityiesat the 2005 National KidsDay celebration at Sasebo Naval Base, Japan, on Saturday. (Greg Tyler / S&S) After being soaked a time or two himself, Anthony Costanzo, 6, decides to share a drenching from a water toy with a young fellow passing by. (Greg Tyler / S&S) Volunteers made sure the more than 250 people attending the event in the sweltering heat kept hydrated. (Greg Tyler / S&S) SASEBO NAVAL BASE, Japan &#8212; Kids appeared to be having a blast at the 2005 National KidsDay celebration here Saturday afternoon, but the infamous Sasebo heat and humidity had many of them &#8212; and their parents &#8212; also searching for a cool splash.

Justin Hill, 12, and Tonya Drummond, 10, played hard at virtually all the activity stations. Taking a break in front of a water-cooled fan used to blow a revitalizing mist, the sweat-soaked duo talked about favorite events.

KidsDay was launched in 2001 to foster stronger relationships between adults and children. Organizers say they want federal officials to add the day to national calendars by 2006, according to www.kidsday.net. Thirty state governors had signed proclamations declaring KidsDay in their states as of 2004.