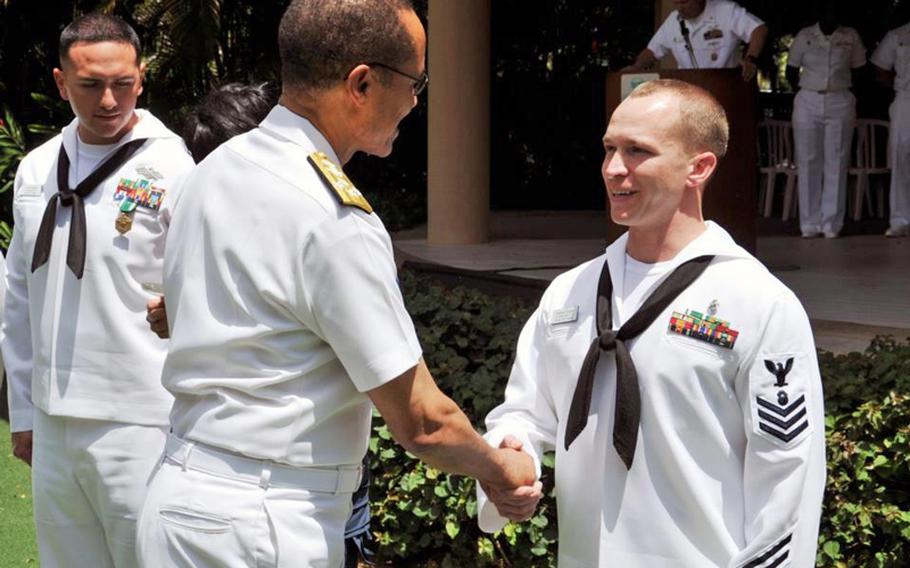 SASEBO NAVAL BASE, Japan &mdash; A Sasebo-based Navy diver has been named the Pacific Fleet&rsquo;s 2011 Shore Sailor of the Year.

Petty Officer 1st Class Andrew Strause of the Ship Repair Facility and Japan Regional Maintenance Center, Detachment Sasebo, beat out four other nominees from across the Fleet, according to a Navy news release. The award was announced by U.S. Pacific Fleet Commander Adm. Cecil D. Haney at a ceremony Friday in Honolulu, following a week of competitive presentations and interviews.

&ldquo;It took a little while to sink in,&rdquo; Strause said Tuesday. &ldquo;Everyone there was deserving of that award &hellip; it&rsquo;s certainly an honor.&rdquo;

Strause and his fellow divers in Sasebo are tasked with repairing eight Sasebo-based ships, in addition to visiting vessels, to keep them out of dry-dock, he said. In 2011, they worked 12-15 hour days, seven days a week, for three months in frigid waters to repair the controllable pitch propellers on the USS Harpers Ferry and USS Tortuga. They finished the Tortuga one day before the March 11 earthquake and tsunami in Japan, and the ship was able to get underway to participate in Operation Tomodachi.

The Navy diver will travel to Washington D.C. next week to compete for the Chief of Naval Operation&rsquo;s Shore Sailor of the Year, he said. If he wins, he will be meritoriously promoted to chief petty officer.

&ldquo;Regardless of what happens, it is definitely an honor to have made it this far,&rdquo; Strause said.