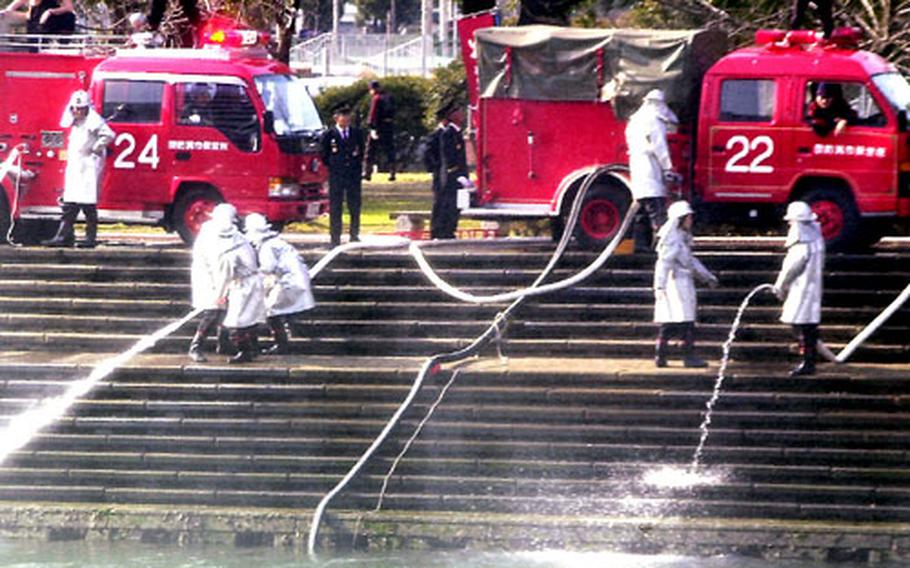 Personnel from a Sasebo city fire detachment hold a hose nozzle steady as a powerful flow of water comes to an end in the canal. (Greg Tyler / S&S)

Personnel from a Sasebo city fire detachment hold a hose nozzle steady as a powerful flow of water comes to an end in the canal. (Greg Tyler / S&S) 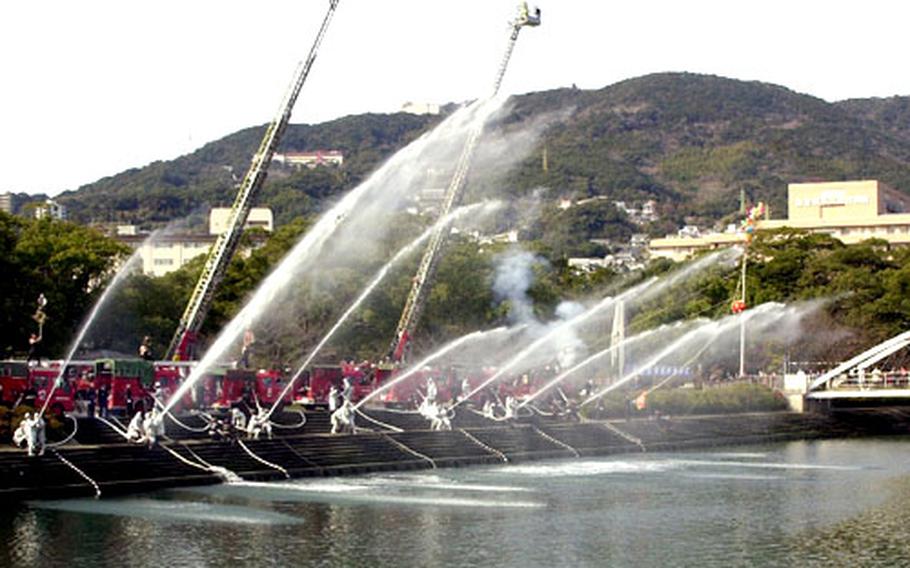 Fire engines from about 30 Sasebo City Fire Department detachments on Tuesday gathered near the Albuquerque Bridge in Sasebo, Japan, while personnel from each unit aimed hose nozzles firing streams of water, creating massive arches streaming through the air and falling into the canal that flows under the bridge. (Greg Tyler / S&S)

SASEBO NAVAL BASE, Japan &#8212; Perhaps it was the springlike weather in mid-winter.

Perhaps it was the tradition of the thing. Or perhaps it just was fun.

Whatever the draw, a thick crowd of spectators converged on downtown Sasebo on Tuesday, packing Albuquerque Bridge and lining both sides of an adjacent street, to watch local and base firefighters celebrate &#8212; just as they do every January &#8212; the start of a new year.

Like many celebrations, the event included a parade. Perhaps not surprisingly, considering who was doing the celebrating, this parade was well-supplied with bright red, shining fire engines. Swelling the ranks: a few marching bands from local schools and platoons of firefighters in sharp dress uniforms from more than 30 municipal fire department branches.

&#8220;We have two of our fire engines out here in the parade today along with several of our personnel,&#8221; said Scott Rhode, Sasebo Naval Base Fire Department chief. &#8220;Each year we&#8217;re invited to the parade and ceremony held earlier in the day, as well as the demonstrations and fireworks staged right after the parade.&#8221;

For the water demonstration, each fire engine took on enormous quantities of water. The fire trucks were parked in a single row along the lip of the sloping concrete retaining wall at water&#8217;s edge, on the side of the canal next to the parks.

The crews unrolled hoses and nozzles &#8212; and at the designated moment, cranked up the pressure and fired off long, steep arching strands of water. The bridge served as impromptu bleachers full of folks enjoying the five- to 10-minute show.

At its most impressive, almost 30 arching arms of water reached into the air in unison, each giving off peripheral spray and filtering the afternoon sunshine, creating occasional slivers of rainbows.

The parade route was along the downtown street next to a city canal. The distinctive suspension footbridge spanning the waterway is named for Albuquerque, N.M. &#8212; Sasebo&#8217;s sister city. The footbridge connects the base&#8217;s Nimitz Park and the Sasebo City Central Park to the rim of Yonka-cho, a bustling open-air shopping mall.