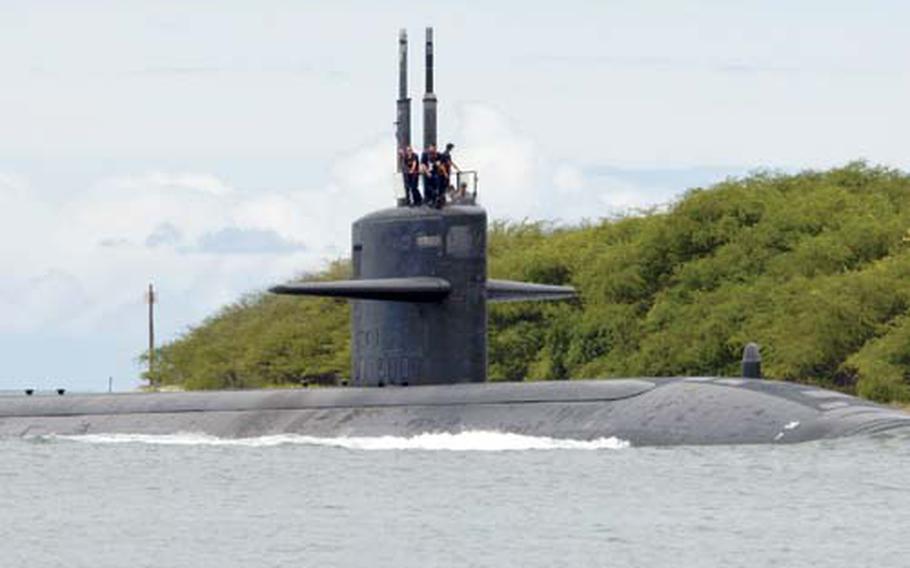 The Sasebo, Japan, the city council is renewing a plea for the Japanese government to convince the U.S. Navy it needs to conduct local joint nuclear-disaster drills.

It was the chief recommendation Thursday by the council&#8217;s special committee on U.S. military affairs, which released a final report on the USS Houston&#8217;s radiation leakage last March and April.

But the city also criticized the Navy, saying local residents never got a full accounting of the incident.

Sasebo Naval Base did not respond to a Stars and Stripes query seeking comment on the report.

The city praised measures the Japanese government took following the leaks. Those measures included an improved notification system for port calls by U.S. nuclear-powered submarines and installation of an additional radiation monitoring post.

"The reason for the committee to adopt the opinion was to put an end to arguments at the council, irresponsibly rejecting the port calls," said panel chairman Masayuki Nagayama. "We are confident that the city council is no longer in a position to refuse U.S. nuclear submarines."

The report was given to all 36 council members who attended Thursday&#8217;s meeting.

The city plans to conduct its annual nuclear-disaster preparedness drill in late January and wants the Navy&#8217;s participation to establish an initial accident response system. Nagayama said such drills on nuclear subs are essential.

"Roles the military play in the drill are vital ... to maintain the relationship of trust between the military and the city," he said.

The Houston leak was discovered last July when about a gallon of water containing trace levels of radioactivity spilled onto a sailor while the sub was in dry dock in Hawaii. After about two weeks of investigating, the United States announced to Japan that the vessel had leaked for two years and discharged tiny amounts of radioactive water at three ports in the country.

During a visit to Sasebo Naval Base in September, Navy Secretary Donald Winter called the amounts "undetectable by any mechanism."

But concerns among nuclear-wary Japanese residents and base employees remain high.

Hideyo Watabe, general secretary of Zenchuro&#8217;s Nagasaki chapter, said the union is asking the city to help ease some of that anxiety.

"No safety measures are taken to protect the workers should a radiation accident occur," he said.

In a formal complaint to the Defense Ministry last August, the labor union called on the Japanese government to install an emergency decontamination facility at the base and requested the joint disaster drills.

"While USS Houston was in the port during the time when radioactive water was seeping out, about 200 workers were in the vicinity," Watabe said. "Disaster drills for nuclear-powered vessels have been conducted at Yokosuka. &#8230; Why are people who work at Sasebo not given the same opportunity?"

Elsewhere, Sasebo Naval Base and the city signed a mutual aid agreement Monday to enhance fire response and allow for joint training, said Keiichiro Ifuku, the Sasebo Fire Department&#8217;s chief of fire prevention. It revises an existing pact in the wake of the October 2006 blaze at the base&#8217;s Maebata Ammunition Depot.