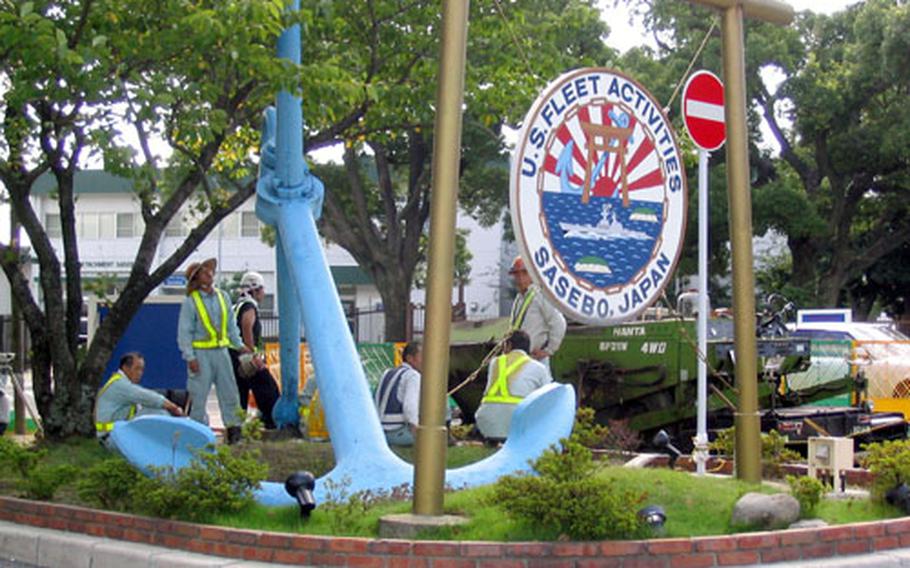 Workers at Sasebo Naval Base spent Saturday making sure that anything that could be a hazard when blown about by a typhoon is secured. Benches, garbarge receptacles and free-standing gazebos were lashed down. (Greg Tyler / S&S)

SASEBO NAVAL BASE, Japan &#8212; No scenario seems to exist that spares Sasebo the brute force of Typhoon Chaba.

The typhoon, forecast to pass over or very close to Kyushu on Monday morning, was about 426 miles southeast of Sasebo Naval Base on Saturday afternoon with wind gusts up to 161 mph.

The base entered Tropical Cyclone Condition of Readiness Three earlier in the day, meaning destructive-force winds of 58 mph or greater are expected within 48 hours.

A school official who asked to not be named said base schools will be closed Monday, what would have been the first day of classes. If the typhoon&#8217;s intensity warrants, the entire base would close to all but essential personnel, said base spokesman Charles T. Howard.

&#8220;The theme here has been that this typhoon should be taken very, very seriously and every precaution should be taken,&#8221; said Petty Officer 1st Class Aaron Kawczk, a forecaster with Sasebo&#8217;s Naval Pacific Meteorology and Oceanography Detachment.

As a precaution, security personnel Saturday surveyed main base housing areas, asking residents to secure or bring inside objects that could be hurled about by strong winds, residents said.

The two possibilities officials list are Chaba passing west or east of Sasebo.

The worst track would have Chaba moving west of the base. The sustained wind would be 98 mph with gusts up to 115 mph.

&#8220;That is strong enough that it would definitely cause structural damages, especially in older structures not built to withstand that strength,&#8221; Kawczk said.

Kawczk said personnel living off base who are uncomfortable in their houses now that such a powerful typhoon is en route should take base commander Capt. Michael James&#8217; offer to stay in bachelor enlisted housing until the storm passes.

In either case, at least two inches of rain are expected.

&#8220;It is still too early to determine exactly when and where the storm will pass, but a passage west or east of the Sasebo area will mean the difference of about 46 mph or greater in observed winds,&#8221; said the Saturday afternoon NPMOD forecast.

After passing Sasebo, the typhoon is forecast to turn in a northeasterly direction toward southwestern Honshu.

Iwakuni residents also were instructed to secure or bring inside objects susceptible to being blown about. Forecasters in Iwakuni said they expect maximum sustained winds of 57 mph and gusts up to 81 mph.

Kawczk said typhoons moving toward Kyushu are seldom as intense as Chaba. When it passes at its closest point to Sasebo, wind nearest the center of the typhoon will be 115 mph.