A teacher gets a big hug from Santa Claus Friday night at the Young Nak orphanage in Seoul. Servicemembers distributed more than 100 gifts at the Noncommissioned Officers Association-sponsored volunteer event. (Erik Slavin / S&S)

A teacher gets a big hug from Santa Claus Friday night at the Young Nak orphanage in Seoul. Servicemembers distributed more than 100 gifts at the Noncommissioned Officers Association-sponsored volunteer event. (Erik Slavin / S&S) 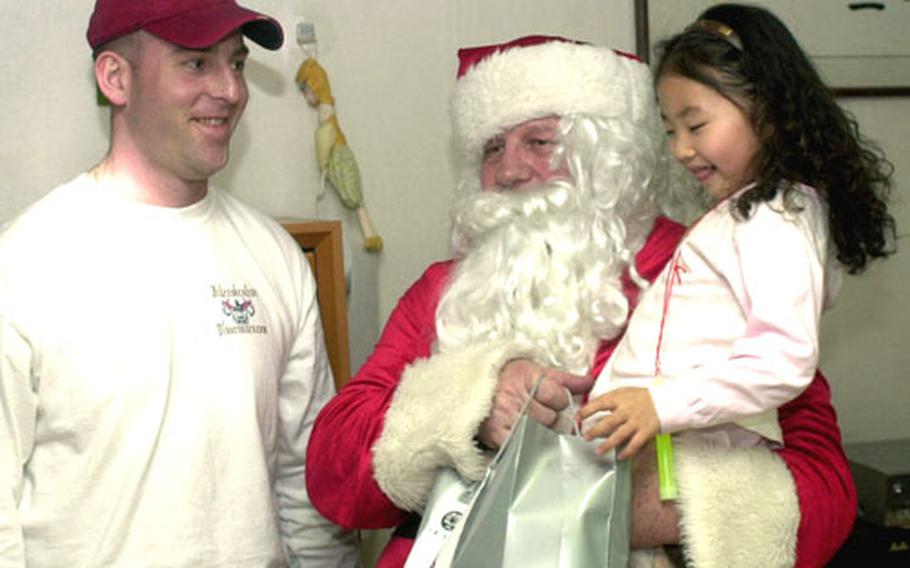 SEOUL &#8212; The jolly man in red joined forces with U.S. and South Korean servicemembers to deliver more than 100 toys to Young Nak orphanage in Seoul on Friday night.

After a sermon, a show and a meal with the orphans and teachers, Santa Claus and his helpers walked around the orphanage complex delivering skateboards, toy racecars, Cabbage Patch dolls and other gifts.

The children&#8217;s faces lit up in anticipation with each footstep through the orphanage halls.

It was Hastings&#8217; first time volunteering at the orphanage, located a few minutes from the Camp Coiner gate. With his family so far away on Christmas, it felt good to share the holiday with the children, he said.

The association also holds quarterly events with the orphanage at the Yongsan Garrison theater, putt-putt golf course and other locations.

Several of the servicemembers and U.S. civilians who volunteered said they came because it just felt like the right thing to do during the season.

The orphanage itself also impressed servicemembers. Capt. Mark Gardner said he had a gloomier vision in his head of orphanages. But the bright atmosphere he walked into bore no resemblance to &#8220;Oliver Twist.&#8221;