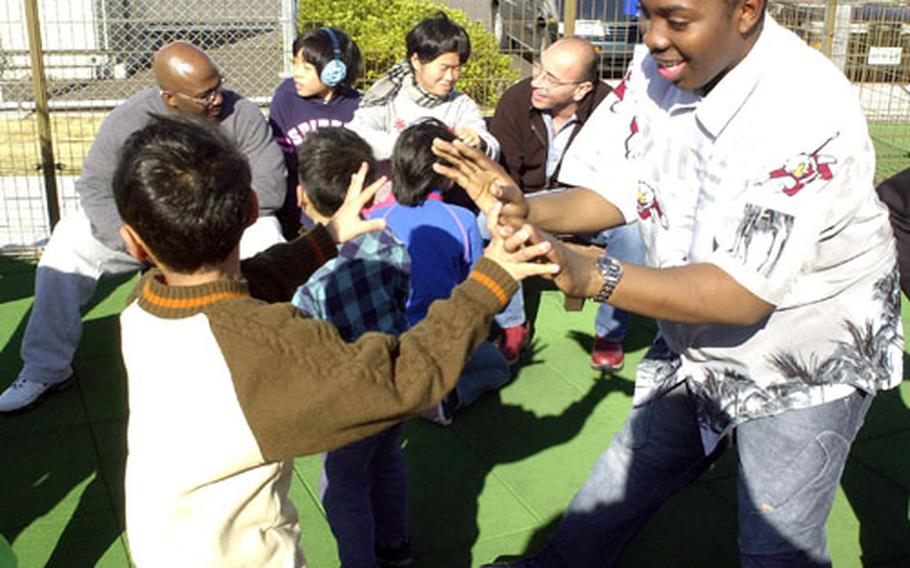 Seaman David John, from the USS Safeguard operating from Sasebo Naval Base, said he had a fantastic time Sunday afternoon playing on a base playground with visiting Japanese orphans. "This is what the holiday season is all about," said John. "It&#39;s about the kids." (Greg Tyler / S&S)

Dozens of orphans from the Omura Kodomo Children&#8217;s Home gathered outside the base&#8217;s Community and Education Center to watch Sasebo Naval Base&#8217;s Fire Department deliver the rather rotund gentleman.

They fully understood his message, but were somewhat surprised to hear old St. Nick speak Japanese.

&#8220;Merry Christmas! Merry Christmas!&#8221; he continued in English, and the kids smiled and reached to touch his fluffy beard and his beefy hands.

&#8220;Japanese children seem truly amazed when they find that this big, very obviously non-Japanese image of Christmas can communicate with them,&#8221; said Santa Claus &#8212; known in the off-season as Jerry Havens, chief of community services, Fleet and Family Support Center.

Sunday afternoon, volunteers and Religious Ministries Department staff members served the children a bountiful Christmas dinner. After the meal, they headed outside for some vigorous playground fun while awaiting Santa.

Sailors from the USS Safeguard and the base&#8217;s security division joined the kids on the monkey bars, in wrestling matches, in games of hide-and-seek and for a few &#8220;chicken&#8221; battles.

Then Santa arrived, and the gift giving began. &#8220;I enjoy the sparkle in the children&#8217;s eyes as they stare up at me in anticipation of receiving a gift,&#8221; Santa said.

Santa gave out 63 brand-spanking new toys, all neatly wrapped and labeled for individual kids. During the holiday season, base residents, through the Angel Tree, Giving Tree and Toys for Tots programs, donated the gifts.

&#8220;We are the closest thing to the Marines stationed in Sasebo since our mission is directly involved with the Marines,&#8221; said Lt. Jeff Powell, officer in charge.

&#8220;The main thing we do is construct the donation boxes that are around the base and collect the toys. We then deliver the toys to the chaplain&#8217;s office, and they make sure they get distributed,&#8221; he added.

Religious Ministries sponsors the visits, which bring kids from local children&#8217;s homes to the base each year to celebrate Christmas and receive gifts donated by the base community.

&#8220;Christmas is always associated with children,&#8221; said Cmdr. Harry W. Griffith, command chaplain. &#8220;A lot of sailors and reservists appreciate the opportunity, since they are away from their own families, to be able to share in that miracle of giving something to the children.&#8221;

In addition, on Saturday, 33 members of the base community staged a Christmas dinner and visit by Santa Claus for the children and staff of Sasebo&#8217;s Seifuen Children&#8217;s Home.

Turkey, ham and all the fixings were served, then the kids got presents. The Sasebo Wardroom Association is the home&#8217;s primary base benefactor, holding various parties and events for the children throughout the year, with the Christmas party being the crowning star on each year&#8217;s calendar.

To supplement the gifts provided by the Wardroom, Sasebo&#8217;s FFSC sponsors an Angel Tree, from which community members were able to select children for whom to buy additional gifts. Each child received three presents this year.

&#8220;While these gifts definitely served to make the boys&#8217; and girls&#8217; holiday season happier, participating community members were extremely grateful for this opportunity to put smiles on the faces of these beautiful children,&#8221; an organizer said.