Sanitation part of the remedy for Ramadi 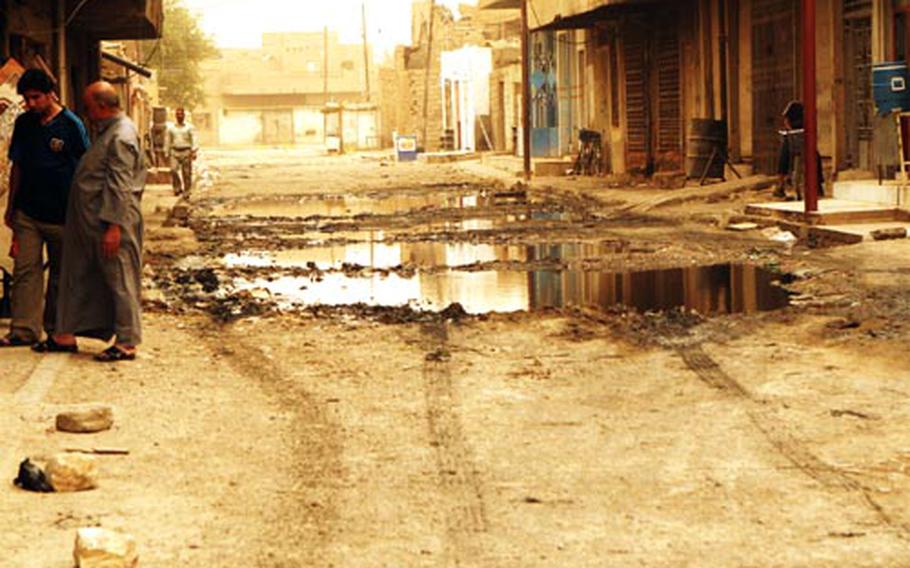 RAMADI, Iraq &#8211; Marine Corps Gunnery Sgt. John Cuoco unfolded his laptop and prepared to hit the meeting of municipal leaders with some hard truths about trash.

There were some successes, he said, clicking through a series of pictures taken during a tour of the city. One showed a neatly swept sidewalk next to a patch of grass. But most of the pictures weren&#8217;t pretty.

Several showed large piles of trash next to, or even surrounding, half-full Dumpsters. One showed a Dumpster overturned into the street to serve as a feeding station for a flock of sheep &#8212; not a rare sight, Cuoco said.

The kicker came a few slides later. Since the beginning of 2007, it said, the U.S. military has spent $26.2 million paying Iraqis to clean up trash and sewage in Ramadi.

"We feel the current state of the city does not reflect the amount of money spent," Cuoco told the meeting, considerably understating his point.

Trash pick-up might seem like a minor concern in a city like Ramadi, the scene of full-scale war less than two years ago. The U.S. military spent $13 million cleaning up rubble during the first nine months of 2007, and entire blocks were leveled. Much of Ramadi never had a sewer system, other than the kind that runs through the middle of the street, and electricity remains in short supply.

But since cleaning up rubbish relies less on large-scale infrastructure than initiative, many of the Americans here view the trash situation as symbolic. And while many of the clean-up contracts were signed largely as stop-gap employment measures, Cuoco&#8217;s slideshow reflects a common, frustrating question: What happened to all that money?

The reaction of Ramadi&#8217;s increasingly assertive government was decidedly mixed. Cuoco said later that the director general of municipal services, a provincial appointee, requested that Cuoco not be allowed to attend future meetings &#8212; a request Ramadi&#8217;s mayor rebuffed, Cuoco said.

Still, while progress may be halting, a drive around Ramadi reflects significant improvements over the past six months. Shops are open and appear well stocked. The market is bustling. At least some of the money has clearly stuck &#8212; the city is now able to field a fleet of battered garbage trucks, for example &#8212; and more improvements are on the way.

The most significant may be in the area of fuel. With Iraq&#8217;s electrical grid providing Ramadi with only about four hours of electricity a day, the importance of fuel goes well beyond the city&#8217;s streets and highways. Homes and businesses rely on generators to run the lights and air conditioners, and farmers rely on them to run the pump stations that irrigate their fields.

But fuel too has been in short supply, spurring long lines and a rampant black market largely staffed by children and their jerrycans. Relief may be on the way, rumbling down the railroad tracks.

A frequent target of sabotage attacks by insurgents several years ago, Ramadi&#8217;s railroad terminal is set to reopen within two weeks. The railroad will be used largely to bring in shipments of fuel, which will be pumped via a newly contructed, 2-mile pipeline to a fuel distribution center.

At the same time, improved security has allowed the province to replace the military convoys that formerly trucked in fuel with much more efficient commercial convoys, and the central government has increased the amount of fuel sent to the province. All told, the fuel supply should be increased 300 percent within the month, said Navy Lt. Cmdr. Douglas Kunzman of Task Force Ramadi. The task force has 100 civilian and military personnel in the area supporting reconstruction operations.

Among other benefits, that will allow the operation of several major generators installed by the Americans in recent years, which are tied in to the city&#8217;s electrical grid. Assuming the provincial government agrees to allocate the fuel, the generators should add about 20 megawatt hours of power per day of electricity, Kunzman said. The city currently runs on between 30 and 35 megawatt hours.

Still, such dramatic, single-shot successes remain the exception, and American officials are largely resigned to a slow slog toward progress. Attitudes will take years to change, many say, perhaps a generation.

At the end of the slideshow on trash, Cuoco suggested distributing leaflets and posters to Ramadi&#8217;s schools.

"We must start with the children," he said. "We must teach them the value of not littering."