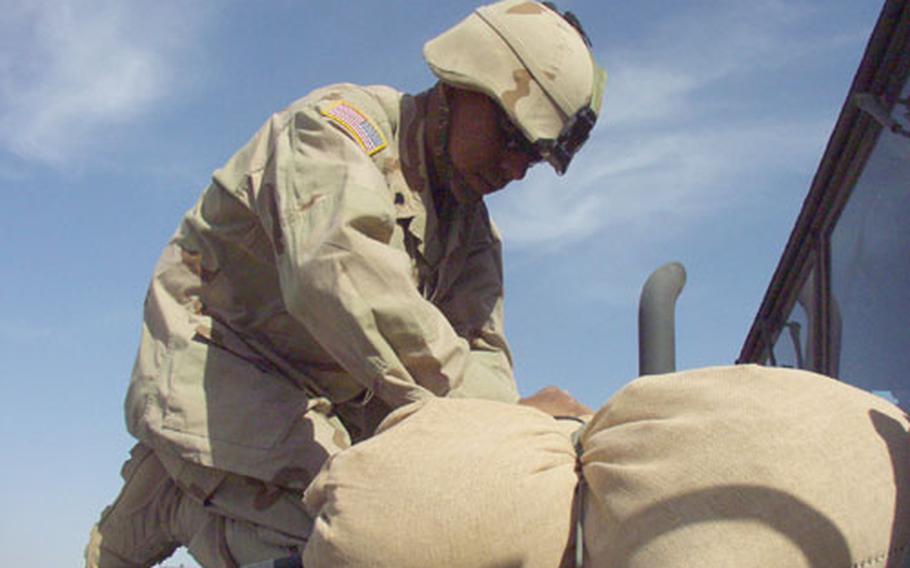 Spc. Francisco Sloan, 24, of Laredo, Texas, secures sandbags to his 5-ton heavy equipment truck at Camp New York, Kuwait. Sloan, a soldier with the 1st Infantry Division&#39;s 299th Forward Support Battalion, and the rest of the Big Red One are preparing vehicles for a convoy ride north to Iraq. (Steve Liewer / S&S)

Spc. Francisco Sloan, 24, of Laredo, Texas, secures sandbags to his 5-ton heavy equipment truck at Camp New York, Kuwait. Sloan, a soldier with the 1st Infantry Division&#39;s 299th Forward Support Battalion, and the rest of the Big Red One are preparing vehicles for a convoy ride north to Iraq. (Steve Liewer / S&S) 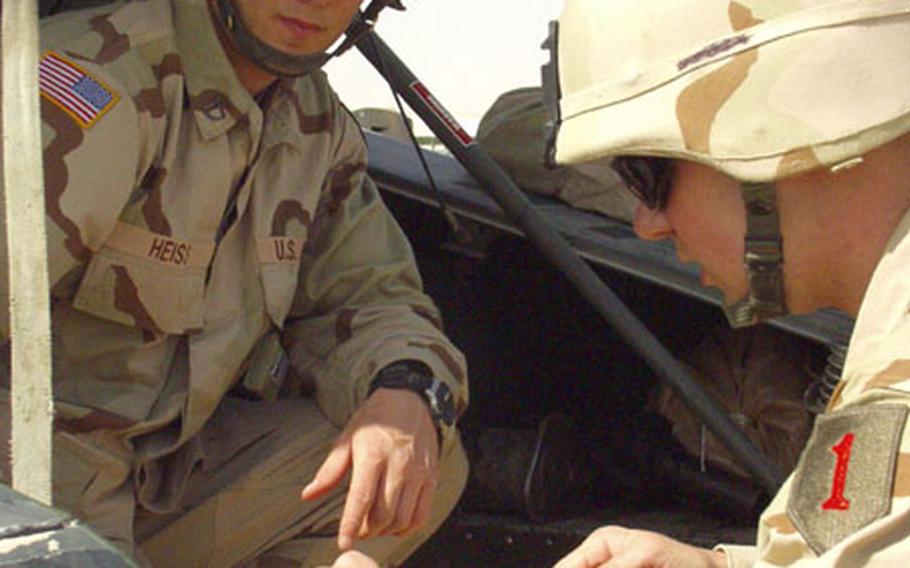 Pfc. Bryan Heiss, 20, of Harrisburg, Pa., (left) and Pfc. Brian Nethery, 20, of Englewood, Fla., attach sandbags to the cargo bay of a Humvee from the 1st Infantry Division’s Task Force 1-77, from Schweinfurt, Germany. The sandbags are designed to protect soldiers from explosives, grenades and small-arms fire by Iraqi guerrillas during the coming convoy ride from Kuwait to Iraq. Heiss and Nethery serve in the task force’s scout platoon. (Steve Liewer / S&S) CAMP NEW YORK, Kuwait &#8212; With sand spread deep and as far as the eye can see, soldiers in Kuwait have found something useful to do with the stuff.

While preparing to convoy north to Iraq in February, 1st Infantry Division troops filled sandbags, piling them aboard hundreds of Humvees and trucks from their bases in Europe. They want to put as much shrapnel-absorbing sand as possible between themselves and any improvised explosive devices that guerrillas might plant in their path.

The Task Force commander, Lt. Col. David Hubner, ordered all of the unit&#8217;s unarmored vehicles reinforced with sandbags under seats, on floors, in cargo areas and above dashboards. They were tied down or secured in wooden frames to keep them from sliding out of place.

Sandbagging foxholes and tents against enemy mortars is an old and effective practice. But it&#8217;s not entirely certain how effectively they prevent injuries to soldiers whose vehicles come under attack, Hubner acknowledged.

Soldiers headed for Iraq differ on how much safer it makes them to crouch behind sandbags.

But some of his friends disagree.

Besides sandbagging its soft-skinned vehicles, Task Force 1-77 received 16 new armored Humvees, its share of the 1st ID&#8217;s order for 600 to be delivered in Kuwait.

It inherited several others left behind by the 4th Infantry Division&#8217;s 1st Battalion, 8th Infantry Regiment, which Task Force 1-77 replaced in Balad, Iraq. Hubner said task force installed armored doors it purchased on another 10 to 15 vehicles.

In Balad, more than 90 percent of the unit&#8217;s combat patrols were to be conducted in armored vehicles, Hubner added. He said soft-skin vehicles would be driven only inside the heavily walled bases.

But, Hubner said, simply shoring up vehicles is only the defensive part of the strategy the division expects to use against the guerrillas who plant IEDs.

On a broader level, he said, they engage in &#8220;pattern analysis&#8221; of attacks to deduce where explosives caches might be. The division is building on the network of informants developed by 4th ID and aims to act swiftly on tips to encourage wavering Iraqis they can trust the Americans.

They try to catch the bomb planters &#8212; many of whom are doing the work for cash, not ideology &#8212; alive so they can lead them to the bomb builders.

So, it has worked for Task Force 1-77. Since arriving in Iraq in early March, it has lost just one soldier &#8212; and none to the deadly roadside bombs &#8212; despite its presence during the bloodiest period of the war so far.

While preparing for the trip north, though, the sandbag detail at least kept soldiers busy and working for their own safety.