'Sand Castle,' a film written by an Iraq veteran, is fiction shaded by war’s realities 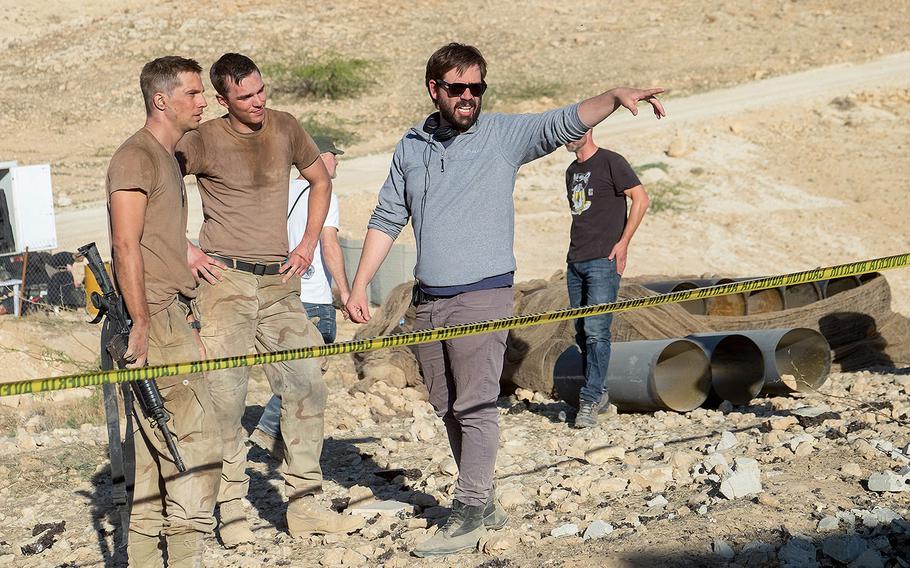 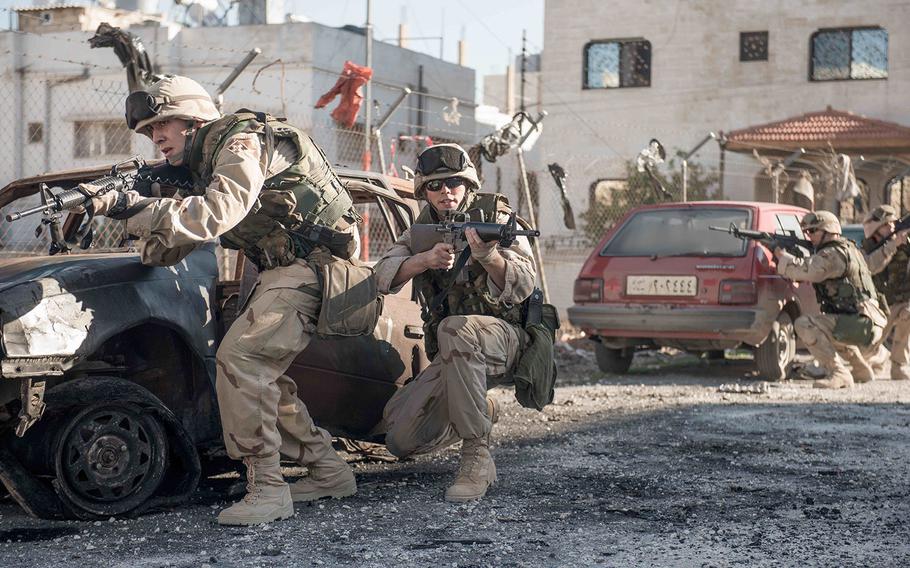 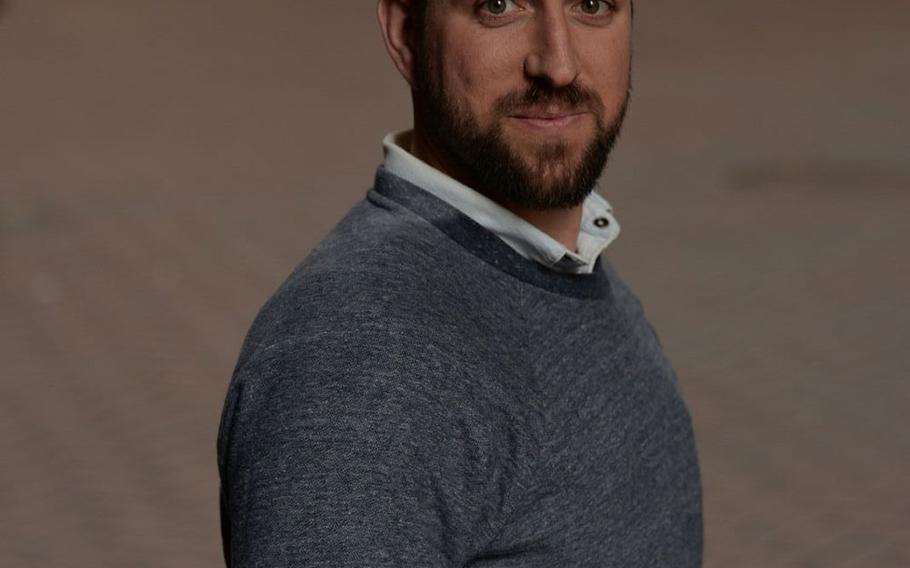 Chris Roessner is an Iraq veteran and screenwriter of the film "Sand Castle" debuting on Netflix on April 21, 2017. (Courtesy of Chris Roessner) 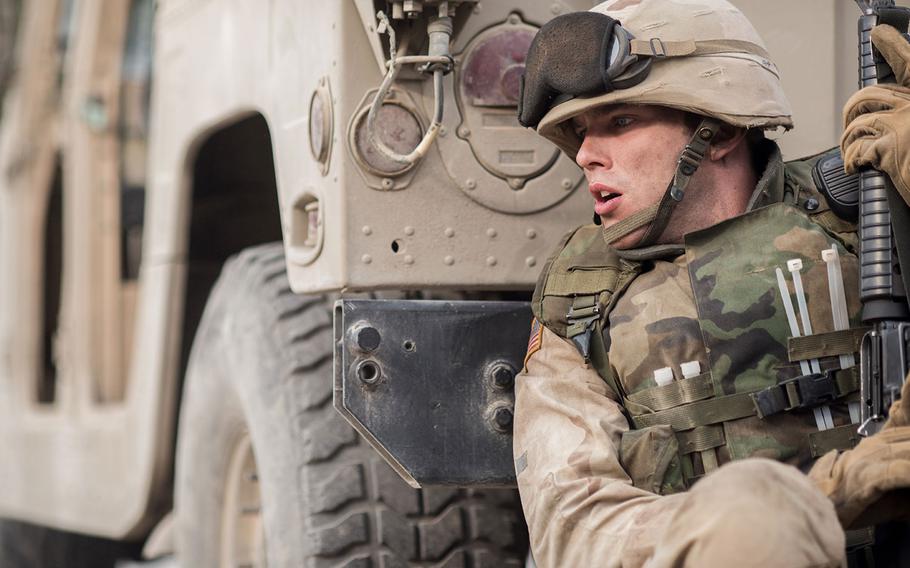 Nicholas Hoult as Pvt. Matt Ocre in the film "Sand Castle." The film, debuting on Netflix on April 21, was written by Iraq veteran Chris Roessner and was partly inspired by his experiences overseas. (Nick Wall/Netflix) 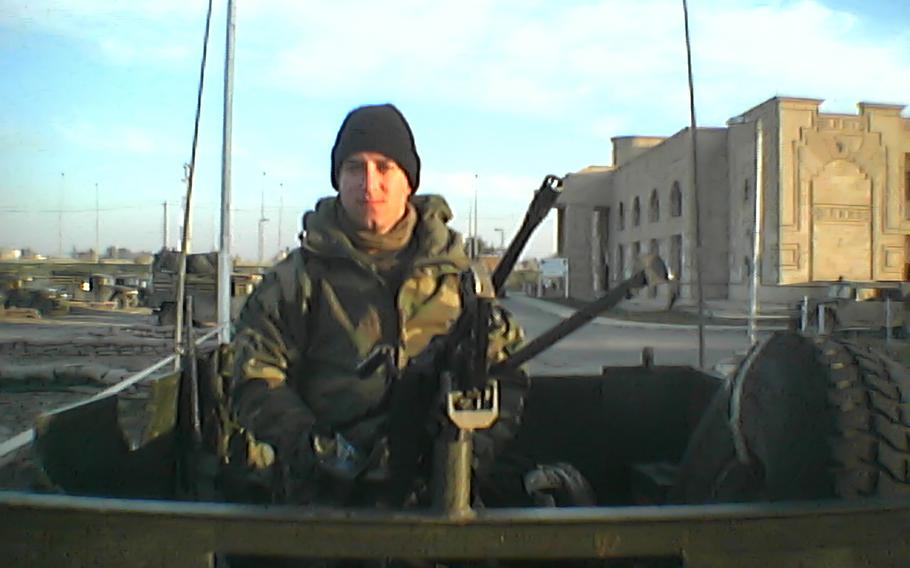 Chris Roessner outside Saddam Hussein's presidential palace in Tikrit, Iraq in late 2003. Roessner wrote the film "Sand Castle," debuting on Netflix on April 21, which was partly inspired by his experiences overseas. (Courtesy of Chris Roessner)

SAN ANTONIO — Chris Roessner received great and terrible news at age 17. He was accepted into the prestigious film program at the University of Southern California, but he had no way to pay for it.

Roessner came from a military family and knew he could serve a few years for education benefits, but he was also interested in creating the story of a life. He spoke with an Army recruiter in Ohio who offered an exaggerated claim of how much money he’d receive in GI Bill benefits to pay for film school. It sounded low risk, and he enlisted in the summer of 2001, when his filmmaking ambitions and an Army life were two distinct pursuits, he said.

But the 9/11 attacks a few months later drew those ideas closer together, and his orders to deploy to Iraq as forces massed for the U.S. invasion synchronized his life with his passion, Roessner said.

With a filmmaker’s eye, Roessner crossed the border into Iraq with the 4th Infantry Division in April 2003. What he experienced there helped shape the script of “Sand Castle,” a film that he wrote and debuts Friday on Netflix, the popular video streaming service.

Some veterans who served in Iraq and Afghanistan have created novels, plays, short fiction, sculptures and poems, all at least partly chiseled by their wartime service.

But “Sand Castle,” according to Roessner, could be the first film about the war in Iraq penned by a veteran who served there and released by a well-known studio.

“The torch is in your hand if you want it or not,” Roessner, now 33, said about the responsibility of being among the first of his generation of veterans to depict their own war. The distinction is an echo of “Platoon,” a Hollywood film written and directed by Oliver Stone, a Vietnam veteran, and among the most famous movies about that war.

Roessner watched “Platoon” for the first time in Saddam Hussein’s commandeered palace in Tikrit, and from the glow of a government-issued laptop playing the film, the contours of that war ignited his own thoughts about the war he was fighting. He started to scribble notes and remarks of fellow soldiers relentlessly, he said, now that he was highly attuned to every moment’s detail.

“I felt like I came online as an artist right then,” he said. “This is what I’m supposed to do.”

Roessner stressed the film, helmed by director Fernando Coimbra and shot on location in Jordan, is not entirely autobiographical, but it does mirror his own experience in Iraq.

As a civil affairs soldier attached to the 4th Infantry Division, then Spec. Roessner crisscrossed post-invasion Iraq in an unarmored Humvee along Highway 1, the road that the coalition used to link Baghdad and Tikrit to northeastern Syria for missions to oversee reconstruction and public works projects and gauge attitudes of Iraqis worried about their nation’s future. One of his main stops was Baquoba, a rural village nestled in a river valley 40 miles northeast of Baghdad and brimming with Hussein loyalists.

The unspooling of violence and hostility there during Roessner’s deployment was a deadly omen for the rest of the country, he said, as forces massing in the big cities pushed militants into smaller towns and villages.

“So goes Baquoba, so goes the war,” he said, recalling his own experience that doubles as a lesson for his main character, Pvt. Matt Ocre, played by Nicholas Hoult.

Roessner said there are shades of himself in Ocre. The soldier in the film enlists to pay for college and finds himself the youngest and least experienced among older, grittier soldiers in the dizzying invasion buildup, just like Roessner.

But what Ocre possesses, and what made himself distinctive, Roessner said, is youthful empathy.

“Maybe I was naive, but I was not skeptical of people I encountered,” Roessner said. “I was idealistic and maybe a little selfish about my own protection. But when you shift the focus off yourself and onto other people, it’s crucial to the civil affairs mission.”

In the film, Ocre and his unit transform an ornate presidential palace into an outpost as the euphoria of Hussein’s ousting is replaced by chaos and uncertainty. Then Ocre’s unit receives a mission in Baquoba to oversee repairs to a water pumping station damaged by a U.S. airstrike.

What follows is a downward spiral into a ‘hearts and minds’ objective as frustrations and killings rise in the scorching desert heat as the water slows to a trickle. Ocre navigates the complexities of the local population to find a solution as attacks on his unit escalate.

“We want the same thing that you do. For you to go home,” an Iraqi man tells Ocre.

How Ocre’s unit accomplishes that mission, or fails to, is a dark portent of how the war will grind on for years after major combat was declared over.

“What they discover is similar to what we discovered: we’re not going anywhere for a long time,” Roessner said of his characters. “When empathy and idealism is shattered, you have to rebuild it to finish the mission. Apathy is easy but empathy is more courageous.”

The water pumping station mission was inspired by a real-life event, Roessner said. Members of his unit were told a bakery destroyed by U.S. forces near Baghdad doubled as a social hub for the community. Its destruction displaced the owner, a prominent local businessman. The unit decided it was vital to rebuild the shop to help quell anti-coalition sentiment.

Soldiers were proud of their effort to recognize need and then fill it, Roessner said. Then insurgents blew it up a second time, scuttling the project and sending a grim message to Iraqis willing to work with U.S. troops, he said.

Roessner said the water pump mission in the film has often been compared to the myth of Sisyphus, the Greek tale of a man rolling a rock up a hill for eternity.

“But it’s like if Sisyphus went home, and some other unit came to roll that rock,” he said.

Though Ocre’s unit is tasked with fulfilling a specific objective, Roessner said he did not want to write what he calls a mission movie: a story building toward taking a hill back from the enemy or rescuing a person, which are overly familiar and not as challenging as the amorphous feeling of combat.

“There is a shift in phases,” Roessner said. Stone’s “Platoon” acted as an inspiration of a few events driving the plot amid a larger tapestry of surreal and indifferent violence that marks a more authentic feeling of modern combat, he said.

“I’m not interested in cartoonish masculinity,” describing a war movie staple that guides current-era films such as “The Hurt Locker” and “American Sniper,” whose central characters are elite tough guys challenged by combat’s aftermath, he said. There are underexplored truths in the stories of ordinary soldiers in extreme circumstances, Roessner said. He deliberately portrayed young, fresh-faced soldiers to move past the ideas in recent films that troops are only hardened and mature special operations types, he said.

“If you’re a kid from Arkansas with a GED and go to war, you’re a great philosopher,” he said. “But there’s not an appetite for that sort of thing in Hollywood.”

Authenticity in the sights and sounds was also important to get right, Roessner said.

For instance, a costume designer asked how other war films do not get uniforms quite right.

“There is a certain type of dirty” most films do not accurately reproduce, Roessner told her, especially the white tinges of sweat that mark uniforms under body armor and a film of grime covering every rifle and body part as the deployment grows longer. As violence and costly decisions weigh on the characters, their bodies are equally stained.

“We got that part right,” he said.

From page to screen

Two things helped guide Roessner’s ideas from the script to production at Netflix.

One of them was a scholarship from the Pat Tillman Foundation. The nonprofit group provides professional development and networking for veterans and military spouses pursuing higher education, with more than 460 scholars awarded $14 million since 2004. Roessner received funding to finish his master’s degree in filmmaking at the University of Southern California in 2011. However, neither Roessner nor the foundation would say how much he received.

Roessner said fellow veterans he has met from his scholarship class and others range from lawyers and doctors to poets and social workers. They were more complex than gruff troops with little intelligence who commonly appear in war films, he said.

“I didn’t see representation in film for these people. Not for soldiers who are incredibly tough and twice as smart,” he said.

The other thing that aided his writing: his well-worn journal from his tour that chronicled minute details and observations, helping propel a sense of authenticity and urgency in his story.

It was strange to share the messy and blunt thoughts of his 19-year-old self with the director and actors, Roessner said, but it helped create a wartime mindset for the actors to adopt and even contained some lines used in the film, he said.

The lines in the journal also helped remind Roessner about the central role of civilians in his mission, he said.

“The most important thing our mission success depended on was our ability to include the Iraqi people,” he said. “Many were courageous to risk life and limb to work alongside us.”

Though it takes place throughout 2003, that aspect of the film is particularly fresh today, Roessner said.

“Now there is an anti-refugee sentiment with the recent executive order,” he said, describing the recent President Donald Trump directive to halt entry from certain Middle Eastern countries, including Iraq, along with ongoing difficulties of translators in Iraq and Afghanistan to gain special entry visas as they come under threat from the Taliban and the Islamic State.

“If the film was released two years ago, or two years from now, the message would be received differently,” he said.

Roessner hopes the film resonates with veterans, but he believes some of them might not see their own experiences translated on screen. He encourages them to find their own way to convey their story, he said.

The film belongs to the audience and the larger culture. It’s no longer his own, he said.

“There is some closure, but not what you might expect. It would be a disservice to say this is what it all meant. They’re about to go home, and for the rest of their lives figure out what all this meant,” Roessner said about the characters, and perhaps himself.