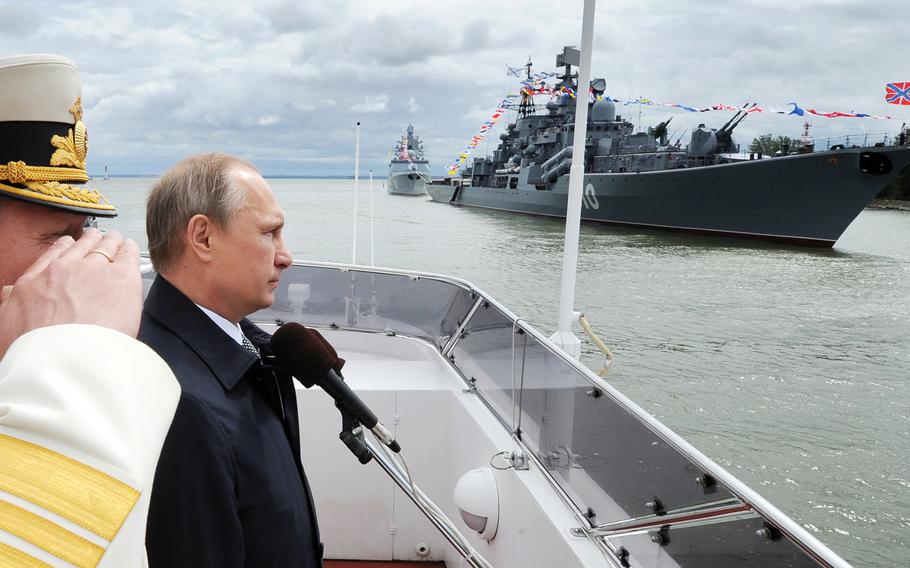 Russia’s ambitious plan to revamp its navy, highlighted last week in a visit by President Vladimir Putin to the Kaliningrad exclave on the Baltic Sea, faces new hurdles in the form of economic sanctions imposed for Moscow’s interference in Ukraine.

The measures are blocking import of critical parts for warships, at the same time an economic recession has lightened the nation’s coffers.

“It’s a case of there are aspirations there. Delivering on it may be difficult,” said Nick Childs, a naval expert at the International Institute for Strategic Studies in London.

Russia’s navy has been a large focus of the country’s armaments program, which called for roughly $340 billion of military spending from 2010 to 2020, with a goal of modernizing 70 percent of the armed forces.

The service continues to build nuclear attack and ballistic missile submarines, and it is in the early stages of contracts for several classes of guided-missile corvettes and frigates. Plans call for modernizing the fleet’s older cruisers and beginning work on destroyers for delivery to the navy sometime in the 2020s, said Dmitry Gorenburg, a naval analyst at CNA Corp.

With an emphasis on guided missiles, the service is tilting toward strategic deterrence and territorial defense in the near term versus the kind of blue-water capabilities associated with the U.S. Navy, Gorenburg said.

“You’re not going to do so well in a big naval battle, but you can threaten at least your neighbors and a lot of NATO countries,” he said.

Even if those plans are implemented, the Russian navy would remain a pale shadow of its Soviet predecessor, which averaged more than 50 warships and auxiliaries in the Mediterranean for much of the 1970s and 80s.

Yet many experts say Russian plans were ambitious even before 2014, when the sanctions hit, with timelines and capabilities often overstated. As in many other countries, the development of major weapons systems over the past two decades has been plagued by delays and cost overruns.

The first of Russia’s latest ballistic missile submarine class, the Borei, was finally delivered to the navy in 2013 — after its keel was laid in 1996. Problems with the Borei’s ballistic missile, the Bulava, further slowed progress.

Recent tensions with the West have only compounded those problems, as nations imposed sanctions in response to Russia’s annexation of Ukraine’s Crimea peninsula and its continued support of separatists in eastern Ukraine.

Key components like chipsets made in Western Europe are now off limits to Russian shipbuilders. Problems importing gas turbines from Germany raise questions about the newest corvette class, the Gremyashchy. Ukraine’s decision to end production of gas turbines for two new Russian frigate classes, the Admiral Grigorovich and larger Admiral Gorshkov, has frozen construction of both.

Such delays have consequences across the fleet. Only two of eight planned Admiral Gorshkov frigates have received turbines, delaying their full delivery to the Northern and Pacific fleets. The six Admiral Grigorovich-class frigates currently under contract were all bound for the Black Sea Fleet, which counts some of the navy’s oldest ships. Now only three of the frigates have guaranteed turbines.

Each of those fleets, in turn, contributes to Russia’s Mediterranean task force, which the country established in 2013.

“The whole fallout from the Crimea episode potentially has ramifications for Russia’s outreach to the eastern Mediterranean,” Childs said.

Russian officials say they will replace components lost to sanctions with their own, and the country has embarked on an ambitious plan to rapidly expand its defense industrial sector. That process is expected to take years at best, and it is certain to face challenges from the financial problems now buffeting the country.

A steady fall in the price of oil, Russia’s primary export and source of revenue, has put the country in recession and caused its currency to plummet. World Bank projections call for the Russian economy, measured in gross domestic product, to contract 2.7 percent this year before beginning a gradual recovery in 2016.

According to Gorenburg, budget woes are likely to blame for slowed production of the Yasen-class nuclear attack submarine, whose first-in-class Severodvinsk wowed even U.S. Navy shipbuilders when it became operational in 2014. Where initial plans called for eight submarines to be operational by 2020, Gorenburg said only two or three are likely in that timeframe.

Despite the delays, funding issues and component shortfalls, the Russian navy remains a regional power with an ability to patrol its territory, experts say. That’s no small accomplishment, with a coastline that stretches across two continents and three of the world’s oceans.

“Unlike the U.S. Navy, they’re not looking to patrol the world right now,” Gorenburg said. “So the fact they can patrol most of their neighborhood in both the Pacific and European theaters is really sufficient.”