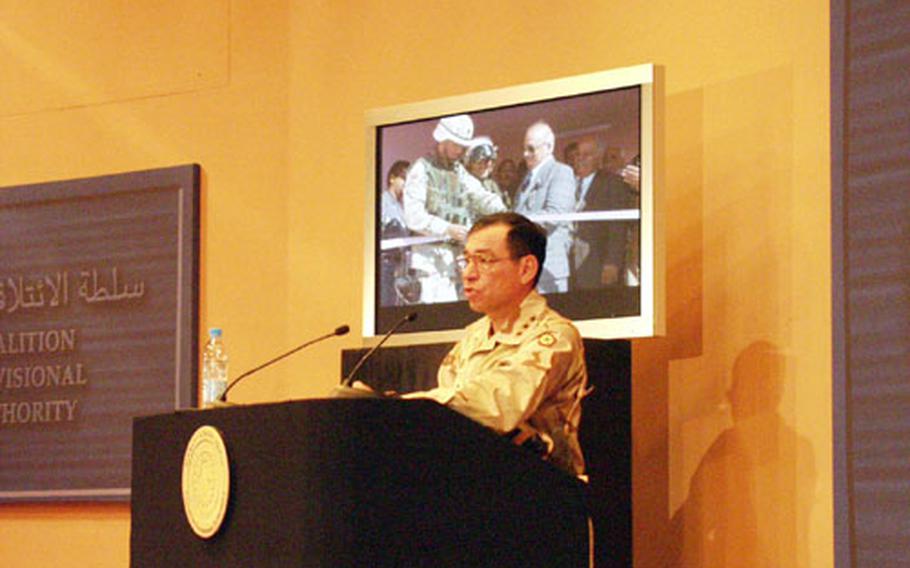 BAGHDAD, Iraq &#8212; Troops expecting to leave Iraq after their one-year mark should not be disappointed, the commander of military forces in Iraq said Friday.

The Army&#8217;s V Corps is scheduled to move back to Germany during February and March. The 3rd Corps will replace it, though Sanchez will remain in Baghdad as overall force commander.

Sanchez dismissed the idea that the U.S.-led coalition will face severe setbacks in intelligence-gathering and neighborly networking once a new batch of soldiers arrives.

Some units are already meeting their replacements, such as components of the 101st Airborne Division being replaced by elements of the 3rd Corps. The American troop movements and those of U.S. coalition partners have so far gone &#8220;very, very smoothly.&#8221;

Sanchez also called on remaining Iraqi resistance leaders to cease attacks on U.S. troops and defended the way America pursues those enemies. The remaining guerrillas, he vowed, would be either captured or killed.

The general also promised his troops would hunt down and capture Izzat Ibrahim al-Duri, the No. 2 official in Saddam Hussein&#8217;s toppled regime.

To that end, coalition forces will continue to raze homes used as headquarters or weapons lairs. They will also continue to capture relatives of fugitives.

Sanchez went so far as to label postwar Iraq a &#8220;war environment.&#8221; Attacking homes used as resistance bases and capturing relatives were, in his estimation, defendable under the Geneva Convention.

&#8220;The Geneva Convention allows us to detain individuals that may be security risks and may have intelligence value,&#8221; he said.

Sanchez said that difficulties in finding &#8220;guarantors,&#8221; or people willing take responsibility for low-risk prisoners, has made it difficult to implement the coalition&#8217;s plan to release hundreds of jailed Iraqis. Those who sign for an inmate must report any new criminal activity, or face penalties themselves.

The problem in finding people to sign for convicts has more to do with the vastness of the desert than with a lack of willing Iraqis.

On Jan. 7, L. Paul Bremer, the U.S. administrator of Iraq, announced the amnesty program, with the qualifier that violent offenders would remain imprisoned.

&#8220;This not a program eligible for those with blood-stained hands,&#8221; Bremer said. &#8220;No person involved in the death of or serious bodily injury to any human being, an Iraqi, a citizen of the coalition or anyone else, no such people will be released. Nor will we release anyone accused of torture or crimes against humanity.&#8221;

Hundreds of Iraqis protested following Bremer&#8217;s remarks because their relatives remained behind the bars of Abu Ghraib prison in spite of the promise.