Sanchez, former U.S. commander in Iraq, calls war 'a nightmare with no end in sight' 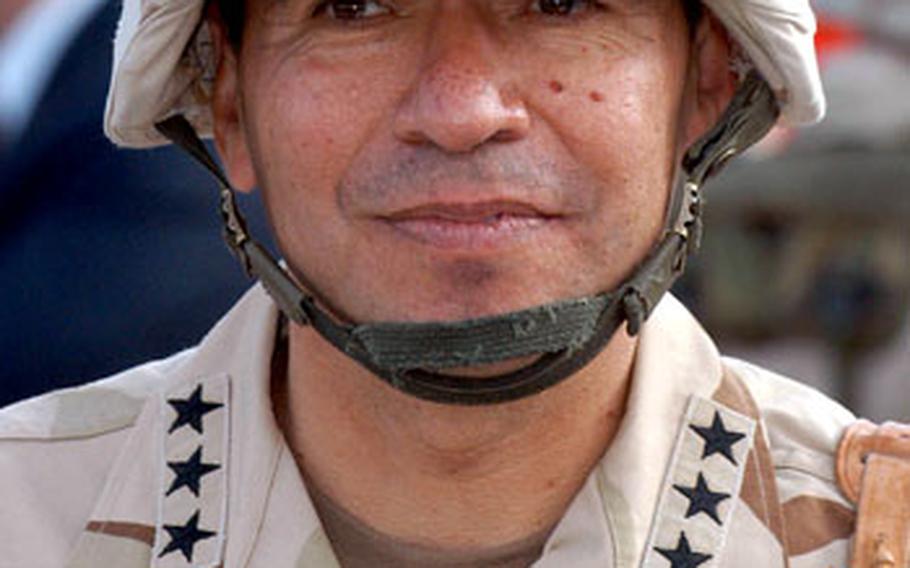 Lt. Gen. Ricardo S. Sanchez, V Corps Commanding General, at a welcoming ceremony for soldiers of the 1st Armored Division at their base in Wiesbaden, Germany, in October, 2004. (AP file photo)

ARLINGTON, Va. &#8211; The former top commander of U.S. troops in Iraq slammed the handling of the war and gave a bleak assessment of the current situation in Iraq.

&#8220;There is no question that America is living a nightmare with no end in sight,&#8221; retired Lt. Gen. Ricardo Sanchez told a convention of military journalists on Friday.

Sanchez commanded U.S. troops in Iraq from June 2003 to July 2004. His controversial tenure saw the capture of Saddam Hussein and the handover of sovereignty to the Iraqi government, but also the rise of the insurgency and the Abu Ghraib prison scandal.

While cleared of any wrongdoing, one report found that Sanchez and his deputy, "failed to ensure proper staff oversight of detention and interrogation operations."

Abu Ghraib was a sore subject Friday for Sanchez, who lambasted the media for using phrases like "dictatorial and somewhat dense," "liar" and "torturer" to describe him.

"I also refused to talk to the European Stars and Stripes for the last two years of my command in Germany, for their extreme bias and single-minded focus on Abu Ghraib," he said.

But Sanchez reserved most of his venom Friday for U.S. officials, saying the U.S. government still has not brought all the resources needed to win in Iraq.

&#8220;From a catastrophically flawed, unrealistically optimistic war plan, to the administration&#8217;s latest surge strategy, this administration has failed to employ and synchronize the political, economic and military power,&#8221; Sanchez said.

Continuing changes to military strategy alone will not achieve victory, rather it will only &#8220;stave off defeat,&#8221; he said.

&#8220;The administration, Congress and the entire inter-agency, especially the State Department, must shoulder the responsibility for this catastrophic failure and the American people must hold them accountable.&#8221;

Even now, the U.S. government has yet to launch a concerted effort to come up with a strategy to win in Iraq, Sanchez said. Such a strategy should involve political reconciliation among Iraqis, building up the Iraqi security forces and getting Iraq&#8217;s regional partners.

Sanchez acknowledged that U.S. officials have adopted that idea, but added that they do not have the necessary nonmilitary resources to carry it out.

Sanchez said he realized there were serious challenges to the U.S. military&#8217;s strategy in Iraq as soon as he became the top military commander in Iraq.

Asked why he did not speak out about his concerns, Sanchez said general officers take an oath to carry out the orders of the president while in uniform.

However, general officers do have the option of stepping down if they disagree with the country&#39;s leaders.

Sanchez said he felt he could not resign and go public with his reservations while he was in Iraq, because he feared that move could further jeopardize troops serving there.