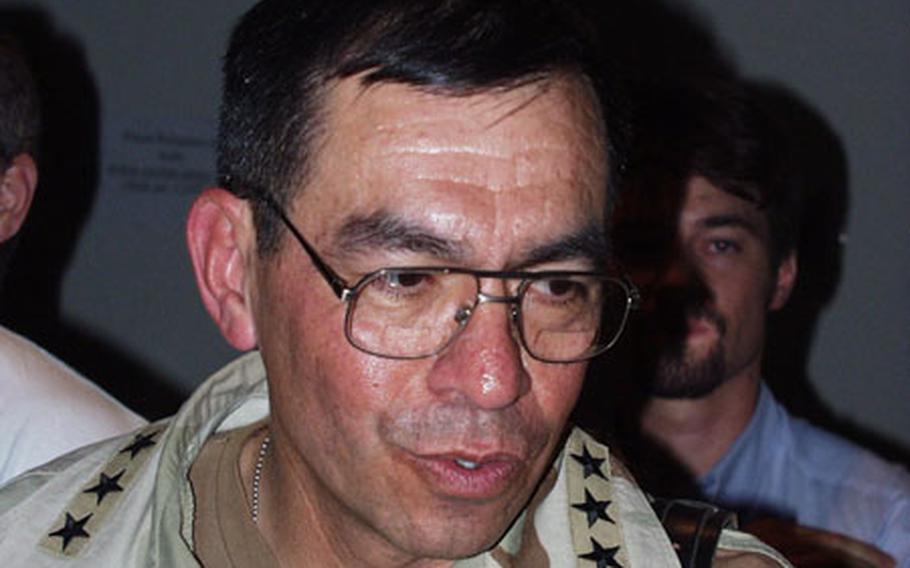 Lt. Gen. Ricardo Sanchez, the top American general in Iraq, said Thursday that he thinks he has the correct number of troops in the country to achieve the tasks he&#39;s been given. (Kent Harris / S&S)

BAGHDAD, Iraq &#8212; The top American general in Iraq reiterated Thursday that he believes he has the correct amount of troops in country to achieve the tasks he&#8217;s been given.

Lt. Gen. Ricardo Sanchez, speaking during his first official press conference since taking command of coalition forces in Iraq, said the number of coalition troops &#8212; which he put at more than 150,000 currently &#8212; is sufficient to achieve his goals during the next two to three months.

After that period, he said the force structure would be re-evaluated, with factors such as mission success and the local environment determining whether adjustments need to be made.

Many of the troops currently serving in Iraq haven&#8217;t been given definitive dates on when their tours in the country will end. Some, such as the 3rd Infantry Division, are still in country after some heavy fighting during the conflict.

&#8220;The 3rd Infantry Division did a fabulous job for America and we are working the force rotation plans to try to get them back home,&#8221; he said.

But he didn&#8217;t provide a specific timetable for such a move and it wasn&#8217;t clear if it would mean fewer American troops in the country or whether other troops would be rotated in.

Sanchez said he has the equivalent of five divisions already in country.

Some media reports have stated that the Army only has one division left in the States that doesn&#8217;t have substantial elements deployed somewhere around the globe &#8212; the 1st Cavalry Division in Texas. And there are already a significant number of Army reservists and National Guardsmen serving in Iraq.

If officials decide to send some Americans home, some of the slack might be taken up by allied countries who have made commitments to send in varying numbers of personnel. A listing of coalition contributions by country on the V Corps Web site lists general descriptions on what types of personnel have either deployed or are promised to deploy. But it doesn&#8217;t list specific numbers and hasn&#8217;t been updated since May 15.

&#8220;There are coalition forces who are flying into here on a daily basis,&#8221; Sanchez said, adding there are developing plans to integrate those forces with the rest of the coalition troops.

Coalition forces have also begun training Iraqi local nationals as security guards. They&#8217;ve stated that they will take over some of the duties, such as guarding specific buildings and other key sites, that coalition forces now handle.

The first members of a new &#8212; and relatively small &#8211; Iraqi army are also supposed to be recruited this month. That force, officials have said, would help re-establish control of the country&#8217;s borders and would be designed to take on tasks centered around the country&#8217;s defense.

Sanchez said there has been an average of about 13 attacks a day against coalition forces spread across the country.

But he said when the number of attacks are put into context &#8211; with an average of about 2,000 patrols taking place every day across the country &#8212; the number of troops coming under fire is very low.

He said there may be a perception that attacks against troops has increased recently, but said the statistics have been relatively the same for the last two months. He also said the loss of 25 troops killed by hostile actions since May 1 doesn&#8217;t hurt the military&#8217;s ability to achieve any of its missions.

He said he feels the death of every servicemember under his command, but that such deaths won&#8217;t stop the coalition&#8217;s efforts or force them to leave the country.