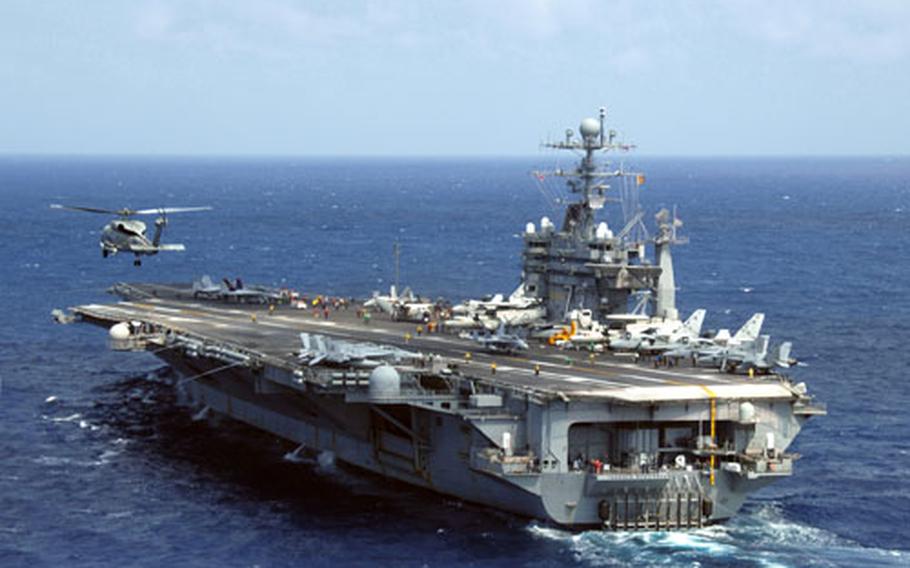 YOKOSUKA NAVAL BASE, Japan &#8212; The hilltop view showed the close proximity of the U.S. Navy nuclear-powered ships &#8212; each with its own reactors &#8212; to the bustling city of San Diego.

Rear Adm. James D. Kelly, Commander, Naval Forces Japan, brought the 20 leaders from Yokosuka, Japan, there for a reason &#8212; to show how cozy Americans are to their Navy nuclear neighbors.

The trip &#8212; organized by the U.S. Navy and paid for by the individuals from Yokosuka&#8217;s Chamber of Commerce and Industry and City Council &#8212; is part of the effort to win over local Japanese opinion in light of the recent announcement that the USS George Washington, a nuclear-powered aircraft carrier, would arrive in Yokosuka in 2008 to replace the conventionally powered USS Kitty Hawk. At 45 years old, Kitty Hawk is the oldest active-duty ship in the Navy.

Opposition groups, citing concerns about safety and the lack of Japanese oversight of the U.S. ships, balked at the idea of becoming the first city outside the United States to host a nuclear-powered carrier. They&#8217;ve collected 470,000 signatures on a petition opposing the carrier assignment. Three times since 2004, Yokosuka&#8217;s city officials have voted unanimously against having a nuclear carrier based there.

The United States has continued efforts to win support, such as the recent San Diego visit and the U.S. Embassy&#8217;s recent release of the &#8220;Fact Sheet on U.S. Nuclear Powered Warship Safety.&#8221;

According to Masashi Suzuki, a Yokosuka military base division official, both the Liberal Democratic Party and Yokosuka&#8217;s Chamber of Commerce and Industry now support the new carrier and are urging Yokosuka Mayor Ryoichi Kabaya to do the same. Both told the mayor they were able to confirm the safety of nuclear-powered carriers through the visit to San Diego, the official said.

&#8220;Both groups basically encouraged the mayor to change his position,&#8221; the official said. &#8220;The mayor told them [during the meeting] that he will accept their opinions, but that does not mean that he [will] make a decision right away.&#8221;

Kabaya told the Asahi Shimbun Japanese newspaper in April that if the State Department document was reliable, he saw no reason to object to the carrier. But he and Kanagawa Prefecture Gov. Shigefumi Matsuzawa signed a letter delivered to Japan&#8217;s Ministry of Foreign Affairs on Monday, listing 17 questions raised by the State Department fact sheet.

&#8220;There have been opinions and criticism brought to the city, so the mayor wants to listen to different opinions,&#8221; the official said. &#8220;The opinions will be reflected in the mayor&#8217;s decision-making but it does not mean that the decision will be made,&#8221; he said.

May will prove to be an important month in terms of garnering public support, Kelly said.

Citing the Navy&#8217;s accident-free record of 50 years of nuclear propulsion, he continued: &#8220;We owe it to the citizens of Yokosuka to demonstrate that this is safe. We know there are local concerns and local ideas. But the myths and untruths are not something the citizens should concern themselves with.&#8221;

The letter contained 17 questions. The questions asked for clarification of some the fact sheet&#8217;s contents as well as the Japanese government&#8217;s understanding of nuclear-powered carrier safety.