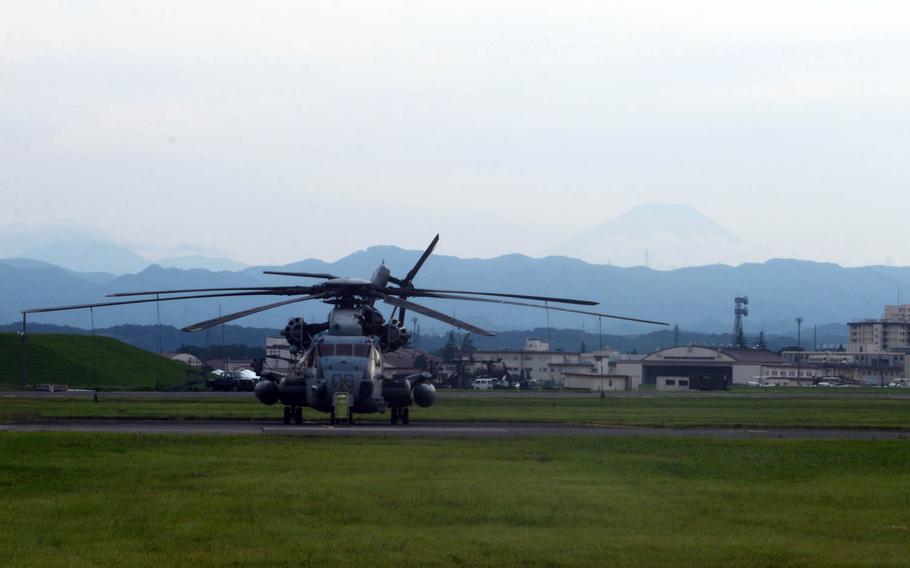 YOKOTA AIR BASE, Japan — A Marine Corps CH-53E Super Stallion may look like a school bus with a rotor on top but it’s got enough power to land on top of Mount Fuji.

A pair of the 15,000-horsepower beasts have been training at the foot of Japan’s tallest mountain this week and will be at Yokota’s annual Friendship Festival that’s expected to attract more than 100,000 locals looking for a taste of American culture this weekend.

Marine Maj. Jayson Welihan, 39, of Jackson, Mich., leading a detachment from Marine Heavy Helicopter Squadron 462 at Yokota’s east side on Wednesday, said the aviators are enjoying the challenge of working in an unfamiliar environment.

“It’s exciting to work on an Air Force base and see some new ranges away from Okinawa and Southern California,” he said.

One of their first tasks during the deployment was collecting four Super Stallions from South Korea, where they were undergoing maintenance, to add to four already on Okinawa, he said.

MV-22 Osprey tilt-rotor aircraft, which visited Hokkaido for the first time for the exercise, got most of the press coverage; however, the Super Stallion aviators are quick to point out some of the things that their machines can do better.

A Super Stallion can lift up to 36,000 pounds — three time as much as an Osprey — and can carry 50 combat troops — twice as many as its helicopter-plane rival, said CH-53E pilot Capt. Patrick Kelly, 30, of Burke, Va.

“It looks like a school bus with a rotor on top but it’s surprisingly nimble,” he said. “Our primary mission is supporting the Marine Air Ground Task Force commander moving heavy equipment, troops and supplies day or night under all weather conditions.”

Squadron 462 aviators are known as the Screw Crew. They got the nickname during the Vietnam War when the unit seemed to always get bad deals, the aviators said.

The Super Stallions have been training near Camp Fuji this week, practicing confined-area landings and low-light flying, Kelly said.

The aviators recently trained at Bridgeport, Cal., flying at 10,000 feet in the Sierra Nevada mountains, and they’re confident they could set a Super Stallion atop nearby 12,388-foot Mount Fuji if they had to, Welihan said.