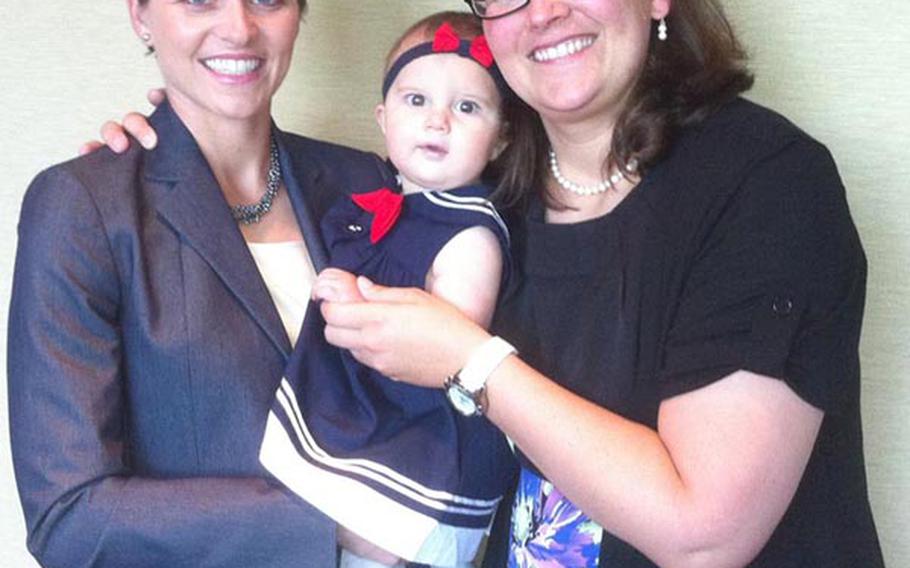 Meg Rapelye, left, and Coast Guard Senior Chief Petty Officer Katrina Goguen pose with their daughter, Elly. Even though Meg has raised the couple's child since birth, the two have not been willing to risk applying for joint custody because of the military?s "don?t ask, don?t tell" law. (Courtesy of Meg Rapelye)

Meg Rapelye, left, and Coast Guard Senior Chief Petty Officer Katrina Goguen pose with their daughter, Elly. Even though Meg has raised the couple's child since birth, the two have not been willing to risk applying for joint custody because of the military?s "don?t ask, don?t tell" law. (Courtesy of Meg Rapelye) Meg Rapelye, right, 32, stands with her partner, Katrina Goguen, 37, a senior chief petty officer with the Coast Guard, and daughter Elly on Sunday at Arlington National Cemetery in Virginia. Rapelye, a graduate student in Chester, Va., said she has yet to formally adopt their 10-month-old daughter because doing so before last week would have raised too many red flags. (Nikki Kahn/The Washington Post) 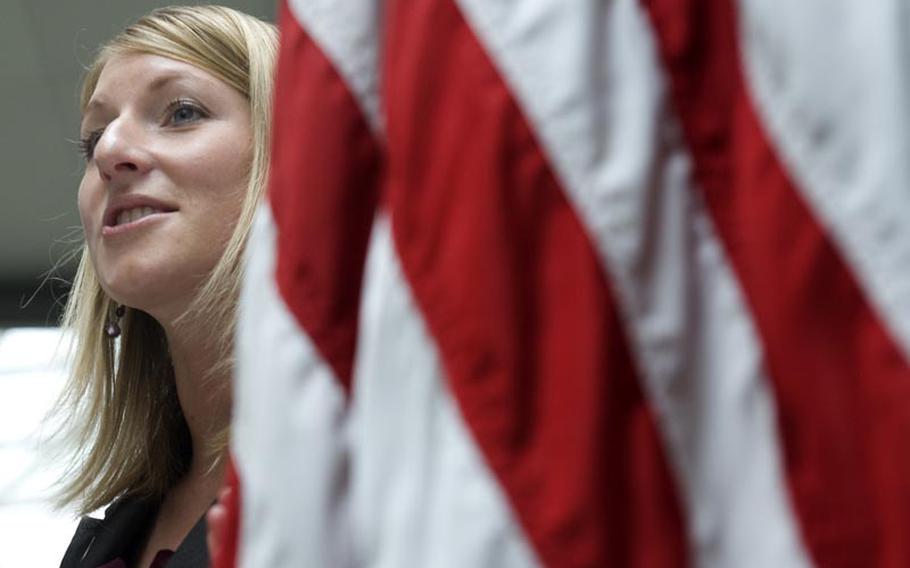 Ariana Bostian-Kentes, of Ann Arbor, Mich., helped form the Military Partners and Families Coalition last fall, after she met other partners of gay servicemembers at a Pentagon meeting about the end of "don&#39;t ask, don&#39;t tell." Speaking on Sunday at the Women in Military Service for America Memorial in Arlington, Va., she said the group represents hundreds of families who are only now emerging. (Nikki Kahn/The Washington Post)

WASHINGTON &mdash; Whenever Meg Rapelye dropped off her infant daughter at the base day care, she had to be careful to call herself a babysitter or a nanny.

&ldquo;I got to tell them for the first time that I&rsquo;m her other mother,&rdquo; Rapelye said. &ldquo;I can say that now. That was my &lsquo;don&rsquo;t ask, don&rsquo;t tell&rsquo; repeal celebration.&rdquo;

Gay servicemembers weren&rsquo;t the only ones to benefit from the end of the controversial 18-year-old law. Their partners, who also have led secretive lives to protect their significant others&rsquo; careers, hailed the repeal as a defining moment in their lives, one that will finally let them publicly acknowledge their loved ones.

For Rapelye, that means filling out paperwork with her partner, Coast Guard Senior Chief Petty Officer Katrina Goguen, to establish joint custody of daughter Elly. Out of fear that any official custody arrangement could end Goguen&rsquo;s 19-year military career, Rapelye has kept her daughter a stranger in legal terms, even while she acts as the primary caregiver to the 10-month-old on a daily basis.

&ldquo;At least she&rsquo;s young, so she won&rsquo;t remember any of the things I&rsquo;ve had to say and the times I&rsquo;ve had to deny her,&rdquo; said Rapelye, a 32-year-old former Coast Guardsman. &ldquo;When Katrina&rsquo;s co-workers threw her a baby shower, I was there as a &lsquo;roommate.&rsquo; I couldn&rsquo;t really celebrate as a parent.&rdquo;

On Sunday, the trio made their public debut as a family at the Military Partners and Families Coalition repeal celebration, held at the Women's Memorial at Arlington National Cemetery. Tracey Hepner, co-founder of the group, said just as many civilians don&rsquo;t understand the sacrifices that military families make, many within the military community don&rsquo;t fully understand the impact the &ldquo;don&rsquo;t ask, don&rsquo;t tell&rdquo; law had on troops&rsquo; partners.

The group was formed after several &ldquo;silent partners,&rdquo; including Hepner, met with defense officials in advance of repeal.

Still, the new military rules do not recognize gay marriages or provide benefits to same-sex partners.

As a result, gay troops can&rsquo;t automatically bring their spouses on accompanied tours, and same-sex spouses have only limited access to military bases and programs.

Heather Lamb said that still presents a major stumbling block for her and her fiancee, a nine-year member of the Air Force. When Lamb gave birth to their son in April, her fiancee had to hope her standard vacation time coincided with the delivery date. Even with the changes, the military wouldn&rsquo;t guarantee maternity or paternity leave in those cases.

&ldquo;I left the Air Force because we couldn&rsquo;t get the same duty assignment. I loved the Air Force, but I wanted to have a family,&rdquo; she said. &ldquo;But even now, there&rsquo;s no joint assignments for gay couples. So that hasn&rsquo;t changed.&rdquo;

Still, Lamb and other gay military couples say the repeal is a tremendous step forward.

&ldquo;Before, if we were out for a walk and somebody saw us, we had to come up with an explanation to protect her job,&rdquo; she said. &ldquo;Now, we don&rsquo;t have to worry about that.&rdquo;

Sunday&rsquo;s event included several traditional military family groups, including Blue Star Families and the National Military Family Association. Hepner said she has been delighted with how quickly most groups have embraced the gay partners as part of the larger military community.

Ariana Bostian-Kentes, president of the Military Partners and Families Coalition, said she hopes that translates into more resources and encouragement for a group of military families who haven&rsquo;t had that support.

Group officials said they&rsquo;ll continue to lobby defense officials for greater recognition and benefits for same-sex couples in the future.